As used in mechanical engineering, the term tractive force is the pulling or pushing force exerted by a vehicle on another vehicle or object. The term tractive effort is synonymous with tractive force, and is often used in railway engineering to describe the pulling or pushing capability of a locomotive. The published tractive force value for any vehicle may be theoretical—that is, calculated from known or implied mechanical properties—or obtained via testing under controlled conditions. The discussion herein covers the term's usage in mechanical applications in which the final stage of the power transmission system is one or more wheels in frictional contact with a roadway or railroad track.

Vehicles in which a hydrodynamic coupling, hydrodynamic torque multiplier or electric motor is a component of the power transmission system may also have a maximum continuous tractive effort rating, which defines the highest tractive force that can be produced while in motion for a short period of time without causing component harm. The period of time in which the maximum continuous tractive effort may be safely generated is usually limited by thermal considerations. such as temperature rise in a traction motor. 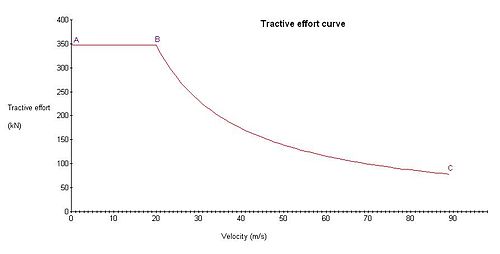 Schematic diagram of tractive effort vs. speed for a hypothetical locomotive with power at rail of ~7000 kW

The basic shape of the graph is shown schematically (diagram right). The line AB shows the operation at the maximum tractive effort, the line BC shows the relationship of continuous tractive effort being inversely proportional to speed.[6]

In order to start a train and accelerate it to a given speed, the locomotive(s) must develop sufficient tractive force to overcome the train's drag (resistance to motion), which is a combination of inertia, axle bearing friction, the friction of the wheels on the rails (which is substantially greater on curved track than on tangent track), and the force of gravity if on a grade. Once in motion, the train will develop additional drag as it accelerates due to aerodynamic forces, which increase with the square of the speed. Drag may also be produced at speed due to truck (bogie) hunting, which will increase the rolling friction between wheels and rails. If acceleration continues, the train will eventually attain a speed at which the available tractive force of the locomotive(s) will exactly offset the total drag, causing acceleration to cease. This top speed will be increased on a downgrade due to gravity assisting the motive power, and will be decreased on an upgrade due to gravity opposing the motive power.

Tractive effort can be theoretically calculated from a locomotive's mechanical characteristics (e.g., steam pressure, weight, etc.), or by actual testing with drawbar strain sensors and a dynamometer car. Power at rail is a railway term for the available power for traction, that is, the power that is available to propel the train.

An approximate theoretical value for the tractive effort of a single cylinder steam locomotive can be obtained by considering the cylinder pressure, cylinder area, stroke of the piston.[note 2] and the diameter of the wheel. The torque developed by the action of the linear motion of the piston depends on the angle that the driving rod makes with the tangent of the radius on the driving wheel.[note 3] For a more useful value an average value over the rotation of the wheel is used. The driving force is simply the torque divided by the wheel radius.

Thus as an approximation the following equation can be obtained (for a 2 cylinder locomotive)[note 4]:

The constant 0.85 was the Association of American Railroads (AAR) standard for such calculations, and certainly over-estimated the efficiency of some locomotives and underestimated that of others. Modern locomotives were equipped with roller bearings were probably underestimated.

European designers used a constant of 0.6 instead of 0.85, so the two cannot be directly compared without a conversion factor. In Britain, the main-line railways generally used a constant of 0.85 but builders of industrial locomotives often used a lower figure, typically 0.75.

For other numbers and combinations of cylinders, including double and triple expansion engines the tractive effort can be estimated by adding the tractive efforts due to the individual cylinders at their respective pressures and cylinder strokes.[note 8]

Values and comparisons for steam locomotives

Tractive effort is the figure most often quoted when comparing the power of different steam locomotives, but its use can be misleading, because tractive effort shows the ability to start a train, not the ability haul it. Possibly the highest figure for starting tractive effort ever recorded was for the Virginian Railway's 2-8-8-8-4 Triplex locomotive, which in simple expansion mode had a starting T.E. of 199,560 lbf (887.7 kN) — but this did not translate into power, for the boiler was undersized and could not produce enough steam to haul at speeds over 5 mph (8 km/h).

For an electric locomotive or a Diesel-electric locomotive, starting tractive effort can be calculated from the amount of weight on the driving wheels (which may be less than the total locomotive weight in some cases), combined stall torque of the traction motors, the gear ratio between the traction motors and axles, and driving wheel diameter. For a Diesel-hydraulic locomotive, the starting tractive effort is affected by the stall torque of the torque converter, as well as gearing, wheel diameter and locomotive weight.

Freight locomotives are designed to produce higher maximum tractive effort at any given speed than passenger units of equivalent power, necessitated by the much higher weight that is typical of a freight train. In modern locomotives, the gearing between the traction motors and axles is selected to suit the type of service in which the unit will be operated. As traction motors have a maximum speed at which they can rotate without incurring damage, gearing for higher tractive effort is at the expense of top speed. Conversely, the gearing used with passenger locomotives favors speed over maximum tractive effort.