The Continuous Progress Mathematics (CPM) system of multi-age classrooms organizes students into classes based on their immediate instructional level. Implemented at Peach Plains Elementary School in Grand Haven, Michigan, in the fall of 1992, instructional groups called terminals are composed of students who have mastered the critical prerequisites of some 250 objectives within 28 areas of mathematical knowledge. Individual learner mastery of the non-linear hierarchy of mathematical objectives is carefully monitored by teachers and curriculum management software allowing all students to advance through the same curriculum, albeit at different times[1]. 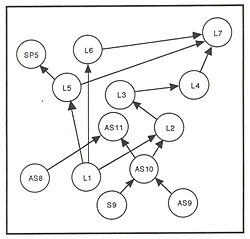 A Section of the Mathematics Hierarchy

CPM was designed around the developmental philosophy that learning is more a function of time rather than ability[2]. Within this design, elementary students leave their homerooms each afternoon to participate in a multi-age instructional group called a terminal. Students flow in and out of these terminals as they are able to demonstrate mastery.

These instructional groups are organized according to two criteria:

Classes in various mathematical strands such subtraction (S), decimals (L), statistic and probability (SP) are open and closed as student eligibility increases or decreases respectively. This fluency allows for all students to move through the hierarchy at developmentally appropriate times[3].

Instructors have full latitude to decide what will be used in the way of resources to bring each student to the point of mastery. Not all students achieve success on the same day and in the same way. Level of mastery, rather than rate, is emphasized.

A criterion referenced test allows the student to demonstrate mastery of the terminal objective. The management software then assigns the student to an open eligible class the next day. The software also determines which classes need to open and close based upon student eligibility. 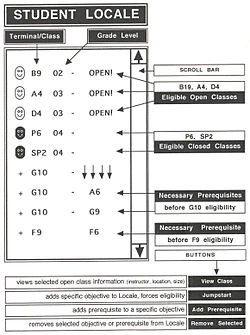 An integral part of Orzechowski’s development process is that of a student’s Locale, or their whereabouts in the hierarchy of mathematical objectives. The Locale (see diagram) provided data about each child’s skill set and functioned as a decision making tool and gateway for enrolling students in appropriate classes each day.