The container compression test measures the compressive strength of packages such as boxes, drums, and cans. It usually provides a plot of deformation vs compressive force.

It is commonly used to evaluate shipping containers made of corrugated fiberboard as well as wooden boxes and crates. Industrial and consumer packages other than boxes can also be subjected to compression testing: drum, pail, bottle, etc.

It is usually a laboratory test involving a special machine, a compression tester, to apply controlled compression on a test specimen. A universal testing machine is sometimes configured to perform a package compression test. Compression testing can also involve a superimposed dead load to a test package. 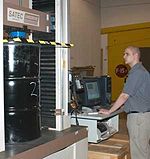 A common method of conducting the test, as described in several published standard test methods, is to compress a box at a constant rate of 1/2 inch (12.5 mm) per minute between two rigid platens. The platens can be fixed so that they remain parallel or one can be pivoted or "floating". The test can be conducted on empty or filled boxes, with or without a box closure. Conditioning to standard temperature and humidity is important.

The results of the constant rate of compression test can be:

The dynamic loads have some relationship with expected field loads.[1]: often factors of 4 or 5 are used to estimate the allowable working load on boxes.

A test can also be conducted with platens that are not mechanically driven but are free to move with a fixed mass (or fixed force) loaded upon them. The results of static load testing can be:

As with any laboratory testing field validation is necessary to determine suitability.

Corrugated fiberboard can be evaluated by many material test methods including an Edge Crush Test (ECT). There have been efforts to estimate the peak compression strength of a box (usually empty, regular singelwall slotted containers, top-to-bottom) based on various board properties. Some have involved finite element analysis.[5] One of the commonly referenced empirical estimations was puplished by McKee in 1963.[6] This used the board ECT, the MD and CD flexural stiffness, the box perimeter, and the box depth. Simplifications have used a formula involving the board ECT, the board thickness, and the box perimeter. Most estimations do not relate well to other box orientations, box styles, or to filled boxes. Physical testing of filled and closed boxes remains necessary.

Containers can be subjected to compression forces that involve distribution dynamics. For example, a package may be impacted by an object being dropped onto it (vertical load) or impacted by freight sliding into it (horizontal load). Vehicle vibration can involve a stack of containers and create dynamic compression responses.[7] Package testing methods are available to evaluate these compression dynamics.