North Tipperary (Irish: Tiobraid Árann Thuaidh) is a county in Ireland. North Tipperary County Council is the local authority for the county and it is part of the Mid-West Region. It consists of 48% of the land area of the traditional county of Tipperary. It is located in the province of Munster and is named after the town of Tipperary. It was established in 1898 and has had a county council ever since, with separate assize courts since 1838. The county seat is Nenagh. Other population centres include Borrisoleigh, Templemore, Thurles and Roscrea. 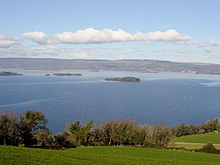 The region is part of the central plain of Ireland, but the diversified terrain contains several mountain ranges: the Arra Hills, the Silvermine and the Devil's Bit. No part of the county touches the coast. The southern part of county is drained by the River Suir; the northern part is drained by tributaries of the River Shannon which widens into Lough Derg. The centre is known as 'the Golden Vale', a rich pastoral stretch of land in the Suir basin which extends into counties Limerick and Cork.

The administrative county of Tipperary (North Riding) was established in 1898 and continued in existence until 2002. The area also had a separate existence as a judicial county following the establishment of assize courts in 1838. The council's name changed to North Tipperary County Council under the Local Government Act 2001. The Council oversees the county as an independent local government area. Per Schedule 8 of the same Act, the Council resolved to give to the office of its chairperson and vice-chairperson the title of “Mayor” or “Deputy Mayor”, respectively. The Council is made up of 21 representatives, directly elected through the system of proportional representation by means of a single transferable vote. The present Council was elected at the local elections held in June 2004.

Under the provisions of the Local Government Act 1991, (Regional Authorities) (Establishment) Order, 1993,[3] the territory of North Tipperary is defined as being in the Mid-West Region. This region is a NUTS III region of the European Union. The county of South Tipperary, by contrast, is part of the South-East Region. At a NUTS II level, both counties are in the Southern and Eastern region.

The Council also claims the title of The Premier County,[4] a title which was usually taken to refer to the undivided territory of both north and south Tipperary. Following the split with the original count, North Tipperary was never granted its own coat of arms.