In physics, interference is the phenomenon in which two waves superpose each other to form a resultant wave of greater or lower amplitude. Interference usually refers to the interaction of waves that are correlated or coherent with each other, either because they come from the same source or because they have the same or nearly the same frequency. Interference effects can be observed with all types of waves, for example, optical, radio, acoustic, and surface water waves.

The term interference has a different meaning in radio communications.

Consider, for example, what happens when two identical stones are dropped into a still pool of water at different locations. Each stone generates a circular wave propagating outwards from the point where the stones were dropped. When the two waves overlap, the net displacement at a particular point is the sum of the displacements of the individual waves. At some points, these will be in phase, and will produce a maximum displacement. In other places, the waves will be in anti-phase, and there will be no net displacement at these points. Thus, parts of the surface will be stationary - these are seen in Figure 1 as the stationary blue lines radiating from the centre. 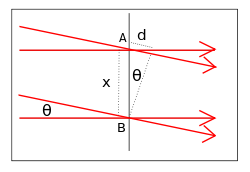 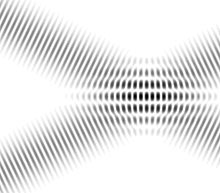 A simple form of interference pattern is obtained if two plane waves of the same frequency intersect at an angle.

One wave is travelling horizontally, and the other is travelling downwards at an angle θ to the first wave. Assume that the two waves are in phase at the point B, then the relative phase changes as we move up along the x-axis. The phase difference at the point A is given by

and half a cycle out of phase when

The fringes are observed wherever the two waves overlap and the fringe spacing is uniform throughout.

When the plane of observation is far enough away, the fringe pattern will be a series of almost straight lines, since the waves will then be almost planar.

Interference occurs when several waves are added together provided that the phase differences between them remain constant over the observation time.

It is sometimes desirable for several waves of the same frequency and amplitude to sum to zero (that is, interfere destructively, cancel). This is the principle behind, for example, 3-phase power and the diffraction grating. In both of these cases, the result is achieved by uniform spacing of the phases.

It is easy to see that a set of waves will cancel if they have the same amplitude and their phases are spaced equally in angle. Using phasors we represent each wave as

we merely assume the converse, then multiply both sides by

The Fabry–Pérot interferometer use interference between multiple reflections to produce optical filters.

A diffraction grating could be considered as a multiple beam interferometer, since the peaks which it produces are generated by interference between the light transmitted by each of the elements in the grating. Feynman[1] suggests that when there are only a few sources, say two, we call it interference, as in Young's slits, but with a large number of sources, the process is labelled diffraction.

Because the frequency of light waves (~1014 Hz) is too high to be detected by currently available detectors, it is possible to observe only the intensity of an optical interference patterns. The intensity of the light at a given point is proportional to the square of the average amplitude of the wave. This can be expressed mathematically as follows. The displacement of the two waves at a point r is:

The displacement of the summed waves is

The intensity of the light at r is given by

Thus, the interference pattern maps out the difference in phase between the two waves, with maxima occurring when the phase difference is a multiple of 2π. If the two beams are of equal intensity, the maxima are four times as bright as the individual beams, and the minima have zero intensity.

The discussion above assumes that the waves which interfere with one another are monochromatic, i.e. have a single frequency – this requires that they are infinite in time. This is not, however, either practical or necessary. If we have two identical waves of finite duration whose frequency is fixed over that period, then they will give rise to an interference pattern while they overlap. If we have two identical waves which consist of a narrow spectrum of frequency waves of finite duration, we will get a series of fringe patterns of slightly differing spacings, and provided the spread of spacings is significantly less than the average fringe spacing, a fringe pattern will again be observed during the time when the two waves overlap.

Conventional light sources emit waves of differing frequencies and at different times from different points in the source. If the light is split into two waves and then re-combined, each individual light wave may generate an interference pattern with its other half, but the individual fringe patterns generated will have different phases and spacings, and normally no overall fringe pattern will be observable. However, single element light sources, such as sodium or mercury lamps have emission lines with quite narrow frequency spectra. When these are spatially and colour filtered, and then split into two waves, they can be superimposed to generate interference fringes.[2] All interferometry prior to the invention of the laser was (self-evidently) done using such sources and had a wide range of successful applications.

Normally, a single laser beam is used in interferometry, though interference has been observed using two independent lasers whose frequencies were sufficiently matched to satisfy the phase requirements.[3]

It is also possible to observe interference fringes using white light. A white light fringe pattern can be considered to be made up of a 'spectrum' of fringe patterns each of slightly different spacing. If all the fringe patterns are in phase in the centre, then the fringes will increases in size as the wavelength decreases and the summed intensity will show 3–4 fringes of varying colour. Young describes this very elegantly in his discussion of two slit interference. Some fine examples of white light fringes can be seen here.[4] Since white light fringes are obtained only when the two waves have travelled equal distances from the light source, they can be very useful in interferometry, as they allow the zero path difference fringe to be identified.[5] 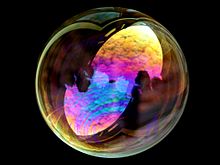 Interference in a soap bubble

To generate interference fringes, light from the source has to be divided into two waves which have then to be re-combined. Traditionally, interferometers have been classified as either amplitude division or wavefront division systems.

In wavefront division systems, the wave is divided in space - examples are Young's double slit interferometer and Lloyd's mirror.

Interference can also be seen all round us. For example, the colours seen in a soap bubble arise from interference of light reflecting off the front and back surfaces of the thin soap film. Depending on the thickness of the film, different colours interfere constructively and destructively.

Interferometry has played an important role in the advancement of physics, and also has a wide range of applications in physical and engineering measurement.

Thomas Young's double slit interferometer in 1803 demonstrated interference fringes when two small holes were illuminated by light from another small hole which was illuminated by sunlight. Young was able to estimate the wavelength of different colours in the spectrum from the spacing of the fringes. The experiment played a major role in the general acceptance of the wave theory of light.[5] In quantum mechanics, this experiment is considered to demonstrate the inseparability of the wave and particle natures of light and other quantum particles (wave–particle duality). Richard Feynman was fond of saying that all of quantum mechanics can be gleaned from carefully thinking through the implications of this single experiment.[6]

The results of the Michelson–Morley experiment, are generally considered to be the first strong evidence against the theory of a luminiferous aether and in favor of special relativity.

Interferometry has been used in defining and calibrating length standards. When the metre was defined as the distance between two marks on a platinum-iridium bar, Michelson and Benoît used interfereomtry to measure the wavelength of the red cadmium line in the new standard, and also showed that it could be used as a length standard. Sixty years later, in 1960, the metre in the new SI system was defined to be equal to 1,650,763.73 wavelengths of the orange-red emission line in the electromagnetic spectrum of the krypton-86 atom in a vacuum. This definition was replaced in 1983 by defining the metre as the distance travelled by light in vacuum during a specific time interval. Interferometry is still fundamental in establishing the calibration chain in length measurement.

Interferometry is used in the calibration of slip gauges (called gauge blocks in the US) and in coordinate-measuring machines. It is also used in the testing of optical components.[7]

Other applications can be found here. 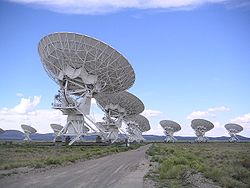 The Very Large Array, an interferometric array formed from many smaller telescopes, like many larger radio telescopes.

In 1946 a technique called astronomical interferometry was developed in 1946. Astronomical radio interferometers usually consist either of arrays of parabolic dishes or two-dimensional arrays of omni-directional antennas. All of the telescopes in the array are widely separated and are usually connected together using coaxial cable, waveguide, optical fiber, or other type of transmission line. Interferometry increases the total signal collected, but its primary purpose is to vastly increase the resolution through a process called Aperture synthesis. This technique works by superposing (interfering) the signal waves from the different telescopes on the principle that waves that coincide with the same phase will add to each other while two waves that have opposite phases will cancel each other out. This creates a combined telescope that is equivalent in resolution (though not in sensitivity) to a single antenna whose diameter is equal to the spacing of the antennas furthest apart in the array.

An acoustic interferometer is an instrument for measuring the physical characteristics of sound waves in a gas or liquid. It may be used to measure velocity, wavelength, absorption, or impedance. A vibrating crystal creates the ultrasonic waves that are radiated into the medium. The waves strike a reflector placed parallel to the crystal. The waves are then reflected back to the source and measured.

If a system is in state ψ its wavefunction is described in Dirac or bra-ket notation as:

s specify the different quantum "alternatives" available (technically, they form an eigenvector basis) and the ψi are the probability amplitude coefficients, which are complex numbers.

The probability of observing the system making a transition or quantum leap from state Ψ to a new state Φ is the square of the modulus of the scalar or inner product of the two states:

(as defined above) and similarly

are the coefficients of the final state of the system. * is the complex conjugate so that

via an intermediate state

. Then we would classically expect the probability of the two-step transition to be the sum of all the possible intermediate steps. So we would have

The classical and quantum derivations for the transition probability differ by the presence, in the quantum case, of the extra terms

; these extra quantum terms represent interference between the different

intermediate "alternatives". These are consequently known as the quantum interference terms, or cross terms. This is a purely quantum effect and is a consequence of the non-additivity of the probabilities of quantum alternatives.

The interference terms vanish, via the mechanism of quantum decoherence, if the intermediate state

is measured or coupled with the environment.[8][9]