The construction of the Assembly Hall (Champaign) consisted of building a huge indoor arena with a 400-foot-diameter (120 m) concrete dome whose center height is 125 feet (38 m) above the center floor which weighs 10 million pounds.[1] The building is considered an engineering marvel because of the unique method used to build the concrete roof.[2] The Assembly Hall is the first ever concrete dome arena and host the University Of Illinois men's basketball team, women's basketball team, numerous concerts and other events. It holds sentimental value for numerous alumni and fans alike and attracts attention for its design and construction.[3] The construction of the Assembly Hall was conceived to provide the University of Illinois with needed space for ceremonies and athletic events. The university’s population had outgrown the largest building on campus at that time, the Auditorium (later rededicated Foellinger Auditorium), and desired one building that could hold the entire university class.[4] The design of the new building, by Max Abramovitz, called for the construction of one of the world’s largest edge-supported structure.[5] The assembly hall was completed in 1963, and was dedicated on Honors Day, Friday May 3.[5] 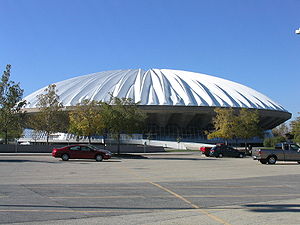 Plans to build a new student center began before 1958. The student enrollment at the University of Illinois was growing tremendously through the years and the UI's Building Committee wanted to plan for future growth. The student enrollment was 18,813 in 1958-58 and was predicted to reach 24,500 by 1965 and 34,000 by 1970. The university's Building Committee was quoted by The News-Gazette, saying, "The University of Illinois has not added a foot of space for organized student activities and recreation since the Illini Union Building was constructed in 1940-41. The enrollment at that time was slightly over 12,000 and the Union, fine though it is, is inadequate now and for expected enrollments in the future."[6]

The main concern at the time was how to pay for the building's $8.7M price tag.[4] The UI administration decided to fund the project through a student fee of $20 a semester and issue bonds.

The plans for Assembly Hall called for a very large structure with no interior supports. The project was overseen by Ray C. Dickerson, president of Felmley-Dickerson Co. who hired architects Harrison & Abramovitz and structural engineering firm Ammann & Whitney, of New York City.[7] The building would hold 16,000 permanent seats with an additional 2,000 seats if necessary.[5]

According to the article "To Cover This Assembly Bowl: A 400 ft (120 m) Prestressed Saucer by Engineering News-Record, the total weight of Assembly Hall is carried by 48 massive buttresses to a 16 feet (4.9 m) wide and 3.5 feet (1.1 m) thick concrete ring foundation, with a 109 feet (33 m) radius. The construction crews first dug down 15 feet (4.6 m) from ground level and poured the concrete ring on high-density, hard gray clay. The center floor of the stadium is 24 feet (7.3 m) below ground level, however the contractors decided not to excavate all of the dirt before the roof was constructed. This decision gave the construction crews more surface area to work on, and decreased the height of scaffolding used when forming the concrete roof. After the roof was completed and the scaffolding was removed, the rest of the soil was excavated through the buildings entrances. By building the structure into the ground, the top row is only 36 feet (11 m) above the ground line. The construction of Assembly Hall required excavation of 60,000 cu yd of soil. Most of the foundation: ring footing, 48 buttresses, and columns and walls of the circular concourse, was completed in 1960.[1]

Construction of the dome roof

After the buttresses were completed, the construction crews could then begin building the falsework on which the concrete would harden. While the concrete was drying, the roof was supported by a central steel tower, the buttresses around the periphery, a circular timber tower about 135 feet (41 m) from the center, and two movable timber scaffolds at the midpoints of 120 feet (37 m) and 60-foot (18 m)-span joists.[1] These supports totaled at 800,000 square feet (74,000 m2) of wooden scaffolding.[5] To aid in construction of the roof, a temporary steel tower was erected in the center of the stadium. As mentioned in the foundation section, the contractors decided not to fully excavate the interior of the building in order to reduce the required height of the steel tower and allow more surface area for construction crews. This decision decreased the tower height to only 100 feet (30 m) thus decreased cost.[1]

According to the article "To Cover this Assembly Bowl: A 400-ft Prestressed Saucer, the roof was cast in 24 segments of 15 degrees each. Each segment of the roof is 52 feet wide at the rim, and 6.5 feet wide at the center. The central ring beam, or very center of the dome, is a heavily reinforced 4 feet thick concrete slab that contains 170 cubic yards of lightweight concrete. The entire roof used 2,880 cubic yards of light weight concrete that weighed only 105 pounds per cubic feet."[1]

Once the cement had finished curing, the top of the roof was painted with three applications of plastic material for water and weatherproofing.[1]

The dome shape of the roof, by design, causes both vertical and horizontal reactions or forces on the buildings walls and monoliths. In order to make Max Abramovitz design a reality, a relatively new post-tensioning technique was required. The post-tensioning techniques required for the construction of the Assembly hall were first developed for Titan missile base construction.[7] Felmley-Dickerson Co sub-contracted Preload Co. of New York City to post-tension a concrete ring girder around the perimeter of the dome.[1] Preload Co. borrowed a special horizontal-wheeled tractor from the missile silo work to wind the steel wire around the dome.[5] The wrapping machine required some slight modifications for this project.[7]

As the wrapping machine traveled around the dome, 2,467 times, the wires were placed in 44 vertical rows and each row decreased from 77 wires on the innermost row to 37 wires for the outer row. Each row was separated by a 1 1/8 in. wide and 1/8 in. thick steel bar.[1][5] These spacers were used in order allow each wire to be fully encase in grout, thus creating a permanent bond.[7]

The construction crews torpedo spliced spools of wire together to create 600 miles (970 km) of one continuous wire.[1] Torpedo splicing consists of two half-sections screwed together at the center, with each section containing spring-loaded jaws that engaged the wire. The more tension put into the wires, the tighter they grip.[7]

The university remodeled a small part of Assembly Hall in 1996 and proposed extensive remodeling in 2002.[2]

In 2002, the University proposed a $66.8 million renovation to modernize the Assembly Hall. According to the article "Overhauling the Hall," by The News-Gazette, the leading local news paper, this renovation included: construction of four two-story "satellite" structures, a new, 2,000 person, outdoor amphitheater on the arena’s south side, lowering the arena floor 4 feet (1.2 m), wider, padded seats, air conditioning, and luxury suites.[9] This proposal did not pass, and the Assembly Hall has remained largely unchanged since its debut in 1963.