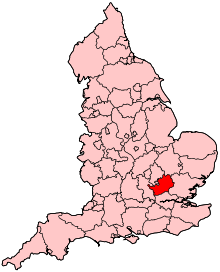 The county of Hertfordshire in relation to England

Hertfordshire has been represented in Parliament since 1290. The number of MPs and the geographic areas they have represented have changed considerably, with some of the bigger changes occurring in 1832, 1885, 1974, 1983 and 1997. Since the last constituency elections in 2005, some boundaries have been altered slightly. The present ones are based upon recommendations made by the Boundary Commission for England, and came into legal effect with the passing of the Parliamentary Constituencies (England) Order 2007. 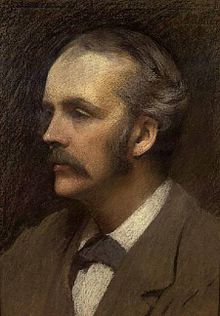 Arthur Balfour was MP for Hertford between 1874 and 1885, and later Prime Minister.

Hertfordshire was first represented in the English parliament in the thirteenth century, during the reign of King Edward I.[1][2] Edward held a meeting of Parliament in the county in 1295.[3] By 1307, the county's representation in parliament consisted of two representatives, known as Knights of the Shire, who represented the county as a whole. In addition, the city of St Albans and borough of Hertford elected two representatives of their own.[1] Parliament's role evolved over the next five centuries, from a body existing primarily to advise the monarch on taxation, into a legislative body in its own right following the English Civil War. However, Hertfordshire's constituency makeup within it remained unchanged until 1852, when the constituency of St Albans was abolished. The next change came in the Redistribution of Seats Act 1885. The constituency of Hertfordshire itself was abolished, with the county represented by the constituencies of Hertford, the re-established St Albans, and the newly-formed Watford and Hitchin.[4]

Following the Redistribution of Seats Act in 1885, Hertfordshire's Parliamentary boundaries remained the same until 1950. However, the demographics of voters in the county changed significantly, with four new towns being designated in the county in the three years from 1946–48.[5][6][7] Meanwhile the eligibility to vote was extended from men who held property of a high enough value, to universal suffrage for all adults over the age of 21, as a result of the Representation of the People Acts in 1918 and 1928.[8] In 1950 South West Hertfordshire was formed from part of the old Watford constituency, and for the following general election in 1955 East Hertfordshire was created from parts of Hitchin and Hertford. The next national boundary change affecting Hertfordshire came into effect for the February 1974 election. Four new constituencies were introduced, however three of these were replaced at the next national boundary change in 1983, as were Hitchin and East Hertfordshire. The 1983 boundary review saw the formation of Broxbourne, Hertford and Stortford, Hertsmere, Hitchin and Harpenden, Stevenage and North Hertfordshire, although the latter was replaced by North East Hertfordshire in 1997. The Boundary Commission for England decided not to change Hertfordshire's representation in Parliament for the 2010 election, although small boundary changes were made affecting eight of the county's eleven existing constituencies.[9]

At the 2010 general election, the Conservative Party gained two seats from the Labour. By holding their existing nine seats, they therefore returned an MP in every Hertfordshire constituency. The seat with the smallest majority was Watford, where Richard Harrington defeated Sal Brinton of the Liberal Democrats by 1,425 votes. The safest seat was Hertsmere, where James Clappison received 17,605 votes more than his nearest rival.

Changes for the 2010 general election

Dash (—) signifies that there were no changes.