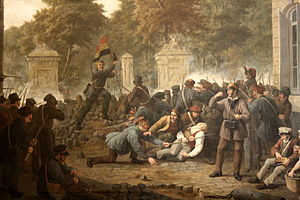 Attack of the Park of Brussels, scene from the Belgian Revolution of 1830, now at the Royal Museums of Fine Arts of Belgium.

Constantinus Fidelio Coene, a painter of history, genre, and landscape, was born in 1780 at Vilvoorden. He first studied under Hendrik van Assche, and in 1809 removed to Amsterdam and became the pupil of Barbiers. He then went to Brussels, and in 1820 was made Professor at the Academy. His picture of 'Rubens receiving from Charles I. the sword with which he had been knighted ' gained for him the grand prize at Ghent, and is now in the Museum of that city. His 'Soldier returning from the Battle of Waterloo' also gained him much praise. He died at Brussels in 1841.

This article incorporates text from the article "COENE, Constantinus Fidelio" in Bryan's Dictionary of Painters and Engravers by Michael Bryan, edited by Robert Edmund Graves and Sir Walter Armstrong, an 1886–1889 publication now in the public domain.