Teesside University is a university in Middlesbrough, England. It has a student body of 29,285 students as of the 2009/10 academic year.[7] It recorded rises in applications of 25.1 per cent and 23.5 per cent for degree courses beginning in 2010, the highest such percentage increases of the five universities in the North East of England.[8] The University has a campus in Darlington named Teesside University Darlington. 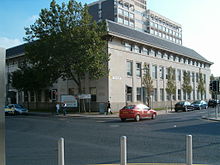 While it was clear enough that, when the time came for a successor to the Middlesbrough-based Mechanics' Institute of 1844, a new technical college was in order, a shortage of funding long proved a barrier to any such plan. The College's launch could otherwise have come as early as 1914. Even after the donation of £40,000 to build the college from local shipping magnate Joseph Constantine in 1916, progress was slow. A Governing Council took place in 1922, followed by a doubling of the original financial offer by the Constantine family in 1924. For the task of constructing the first Technical College building, Mr Graham R. Dawbarn (a London architect also responsible for additions to Corpus Christi College, Cambridge) was appointed on 29 March 1926.[9] Building work finally kicked into action in 1927, culminating in the beginning of enrolment and teaching formalities on 16 September 1929. But the fanfare had to wait, until the turn of the decade, in order to accommodate the royal schedule.

Constantine Technical College was nonetheless finally opened on 2 July 1930 by the future King Edward VIII, the Prince of Wales. Although not yet a university, from the outset, Constantine was both a further and higher education college. While at one end of the spectrum students at Constantine could be as young as 15, also publicised in its Prospectus were degree courses validated by the University of London. Star disciplines included metallurgy, engineering and chemistry. Five rooms were also reserved for an art department, until cramped accommodation forced the School of Art to split from its parent site for the 1950s. 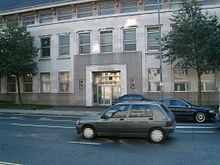 University of Teesside on Borough Road.

The 1960s were years of sweeping change – as well as political sting – for the still comparatively fledgling College. By the end of the decade the first two "Teesside University" campaigns had begun: the first, from the early 1960s to 1966, and the second, from 1967 to 1972, spates of enthusiasm killed off on each occasion only by the scepticism of then-Minister of Education, Anthony Crosland, and Margaret Thatcher's defining White Paper, respectively. The latter effectively shelved plans for the erection of any new institution in the United Kingdom, until the 1980s at least.[10]

On campus, one of the most visible major developments for the College was an extension comprising an 11-storey "skyscraper", on which construction work began in 1963. The College acquired the neighbouring former High School of 1877. The College briefly restyled itself Constantine College of Technology, before becoming a polytechnic (Britain's 13th) in 1969. At that point, the institution boasted 17 degree courses.

A merger with Teesside College of Education took place in the 1970s along with the purchase of Flatts Lane. The Clarendon Building was added in 1973, as was the Stephenson Building in 1976, with both remaining in use for the Polytechnic's long-awaited conversion into a University. That happened on 16 June 1992, when Teesside Polytechnic became one of the United Kingdom's first new universities, following that year's Further and Higher Education Act. 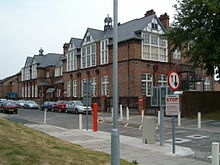 By the 1990s student numbers were nearing the 8,000 mark, but only in 1997 was the old Polytechnic's library replaced, by a Learning Resource Centre. Subsequent additions included the Virtual Reality Centre and Centre for Enterprise, as well as, more recently, the Phoenix and Athena Buildings. Today, historic structures such as the old High School (the Waterhouse building), the Constantine building and Victoria Building of 1891 (a schoolyard-equipped Victorian school, housing a series of graduate business incubator units), are all Grade II listed buildings.

In 2009, the University of Teesside changed its name to "Teesside University", changed its logo and adopted the motto "Inspiring success" as part of a rebrand that cost £20,000. Alternative names also suggested included "Middlesbrough University" and "Tees Valley University".[11]

On 15 October 2009, Teesside University was elected University of the Year and Outstanding Employer Engagement Initiative in the Times Higher Education Awards.[12] 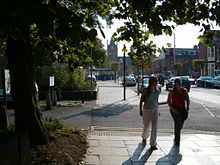 View of the clock tower from Albert Road

The University has been situated since its formation as Constantine Technical College in 1930 within the borough of Middlesbrough in the North Yorkshire area of England on the south banks of the River Tees. Transport links exist via the A19 and A66 roads. The University's entrance is at the site of the old Constantine College building, fronted by the Waterhouse clock tower.

The University has opened its temporary campus Teesside University Darlington, in the former Eastbourne Secondary School in the Eastbourne area of Darlington. A new Darlington campus will open in 2011 with work starting on site in April 2010. The new campus will be on the Darlington College site, in the Central Park regeneration area next to the East Coast mainline railway station.

There is accommodation provided in self-catered rooms, mostly reserved for first year undergraduate students but also for international students, postgraduates, staff and undergraduates who have been unable to find alternative accommodation. All accommodation is within easy walking distance of University facilities.

The University has four managed residences (halls, houses and flats). Further places are available through the University managed housing scheme (properties owned by private landlords but managed by the University).

The University consists of six schools.

The School of Arts and Media is made up of six academic sections: Fine Art, Design, Media, History, English and Performing Arts.

The Centre for Nano & Microsystem has developed a new facility to apply nanotechnology and microfabrication into the design of miniaturised diagnostic devices. such as 'Lab on a chip', micro fluidics, BioMEMS, and photonics, with a focus on photolithographic processing, wet and dry etching, metallisation and thin film deposition, screen printing and device packaging.

The University has been ranked second place of all English universities by the Funding Council for attracting students from atypical addresses,[citation needed] and has won seven National Teaching Fellowships.[13]

The construction of an £11 million Institute of Digital Innovation, as part of the 2010 DigitalCity project is now underway and the Animex International Festival is also staged there on an annual basis, complementing the University's coverage of animation and computer games. It is also home to the Northern Region Film and Television Archive.

The first National Student Survey disclosed its findings in September 2005. Over the full range of criteria, the University scored 4/5 for overall student satisfaction - level with institutions such as Leeds and Newcastle. Within Teesside, English, Law and Art & Design fared best, with all three areas within the top 25 per cent of student satisfaction nationally.[14] In the resulting overall "league table", the University was ranked joint 34th of 101 institutions. It was also during this year that the University scaled the national top 20 for graduate further study or employment in The Times Good University Guide 2005; Teesside was the highest ranked new university.

The 2006 Times Good University Guide and The Sunday Times university league table ranked Teesside 91st out of 100 British universities[citation needed] and joint 75th of 119 institutions respectively, with the National Student Survey 2006 giving the institution's Art & Design courses the top ranking nationally.[14] The University achieved the same overall satisfaction score of 4/5 as the previous year, contributing to an overall rank of joint 70th of 129 recorded institutions.[15] According to the 2008 National Student Survey, 84 per cent of degree students are happy with their course and the percentage of overall student satisfaction is up for the third year running.[citation needed]. Teesside University was named the Times Higher Education (THE) Awards University of the Year 2009.[16]

Undergraduate application statistics for Autumn 2005 entry showed that Computer Art (applications up 41.7 per cent), Electronic and Electrical Engineering (up 30.4 per cent), Sociology (up 25.5 per cent), Psychology (up 18.09 per cent) and Law (applications up 16.8 per cent) were among the courses with the fastest growing popularity within the University.[citation needed]

In research, the University offers an array of relevant routes of study resulting in the qualification of MPhil, PhD, MProf and DProf. The strongest research profiles, according to the 2008 Research Assessment Exercise, were in Computing and History, with Business & Management Studies and Sociology also producing work of international excellence.[17]

The Students' Union is led by students for students with four current students (usually final year) elected by the student body to hold the positions of President, Education Officer, Student Activities Officer, Campaigns and Welfare Officer in March of each year. They then take their posts from July to the end of June each year and have the option to seek re-election for a second and final term if they wish.

The current Executive Officer Team is Lori Wheatman (President), Phil Makinson (Education Officer), Tony Clapham (Student Activities Officer) and Jenny Gill (Campaigns and Welfare Officer) who will hold their posts until July 2012. As the Officer Trustees they sit on a wider Board of Trustees who oversee the running of the Students' Union which also includes External Trustees drawn from the worlds of local government, business, charity and the public sector.

The Students' Union has won numerous accolades; it was named Students' Union of the Year at the BEDA (Bar Entertainment and Dance Association) Awards in 2004 and Club Mirror Students' Union of the Year in 2002, as well as finishing runner-up in the latter award in 2007. In 2002/2003, the Students' Union also won the Sport England Volunteer Investment Programme Award, while the Union's bar, The Terrace Bar, was awarded Best Bar None status in both 2006 and 2008, overcoming competition from universities from across the two regions of the North East and Yorkshire before going on to win four Best Bar None Middlesbrough Awards 2009 recognising outstanding standards of staff training and strong focus on the safety of customers. The Students' Union also won the 2007 It's Not Funny competition,[18] winning a live comedy performance featuring Bill Bailey, Marcus Brigstocke, Andrew Maxwell and Simon Amstell.

Alongside an award winning bar and venue, the Students' Union has support services for students in the shape of The Link which provides help with welfare, academic, financial and personal problems as well as a range of part-time jobs vacancies. Students are also encouraged to get involved in their Students' Union in a variety of ways. There are over 40 clubs and over 20 societies and if their interests aren't covered they are able to set up their own. The Activities Centre will help them to do this, as well as provide the opportunity to get involved in charity work such as Raise and Give (RAG).

The Tease, formerly The Terrace Star, is the Students' Union's monthly magazine and students are able to get involved as Media and Marketing Assistants by becoming editors, writers, reporters, critics, photographers and designers.

Union Council or the Student Opinion Counts Forum is held once a month and in this meeting the key issues affecting students are debated, motions are passed and the Executive Officers are held to account. The Chair and Vice Chair of Union Council are elected to these posts at the Annual General Meeting (AGM). There are plenty of committees for students to get involved with, such as Finance and Elections.