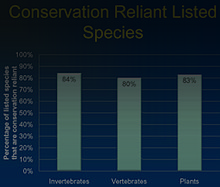 Percentages of listed species which are conservation reliant.

The term Conservation reliant species grew out of the conservation biology work of "The Endangered Species Act at Thirty Project ", begun in 2001 [2], and has been popularized by the leader of that project, J. Michael Scott [3] This is a new wildlife management term, first published in Frontiers in Ecology and the Environmentin 2005. Worldwide application of the term has not yet developed and it has not yet appeared in a non-USA or Canadian authored publication.[4]

Passage of the 1973 Endangered Species Act (ESA) carried with it the assumption that endangered species would be delisted as their populations recovered. It assumed they would then thrive under existing regulations and the protections afforded under the ESA would no longer be needed. However, eighty percent of species currently listed under the ESA fail to meet that assumption. They require species-specific conservation interventions (e.g., control of predators, competitors, nest parasites, prescribed burns, altered hydrological processes, etc.) to survive and thus they are conservation reliant.[5]

The criteria for assessing whether a species is conservation-reliant are:[6]

There are five major areas of management action for conservation of vulnerable species. 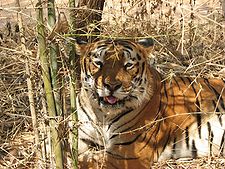 A prominent example is in India, where tigers, an apex predator and the national animal, are considered a conservation-reliant species. This keystone species can maintain self sustaining wild populations; however, they require ongoing management actions because threats are pervasive, recurrent and put them at risk of extinction. The origin of these threats are rooted in the changing socio-economic, political and spatial organization of society in India. Tigers have become extinct in some areas because of extrinsic factors such as habitat destruction, poaching, disease, floods, fires and drought, decline of prey species for the same reasons, as well as intrinsic factors such as demographic stochasticity and genetic deterioration.

Recognizing the conservation reliance of tigers, Project Tiger is establishing a national science based framework for monitoring tiger population trends in order to manage the species more effectively. India now has 28 tiger reserves, located in 17 states. These reserves cover 37,761 square kilometres (14,580 sq mi) including 1.14% of the total land area of the country. These reserves are kept free of biotic disturbances, forestry operations, collection of minor forest products, grazing and human disturbance. The populations of tigers in these reserves now constitute some of the most important tiger source populations in the country.[7]

The magnitude and pace of human impacts on the environment make it unlikely that substantial progress will be made in delisting many species unless the definition of "recovery" includes some form of active management. Preventing delisted species from again being at risk of extinction may require continuing, species-specific management actions. Viewing "recovery" of "conservation-reliant species" as a continuum of phases rather a simple "recovered/not recovered" status may enhance the ability to manage such species within the framework of the Endangered Species Act. With ongoing loss of habitat, disruption of natural cycles, increasing impacts of non-native invasive species, it is probable that the number of conservation-reliant species will increase.

It has been proposed that development of "recovery management agreements", with legally and biologically defensible contracts would provide for continuing conservation management following delisting. The use of such formalized agreements will facilitate shared management responsibilities between federal wildlife agencies and other federal agencies, and with state, local, and tribal governments, as well as with private entities that have demonstrated the capability to meet the needs of conservation-reliant species.[8]