Consecration of the National Cemetery at Gettysburg

Consecration of the National Cemetery at Gettysburg 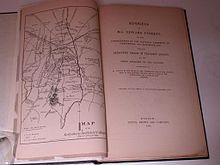 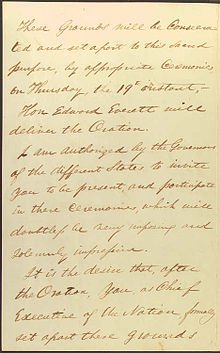 David Wills invitation to Abraham Lincoln: "It is the desire that, after the Oration, you, as Chief Executive of the nation, formally set apart these grounds to their sacred use by a few appropriate remarks."[6]:25

Following the Battle of Gettysburg, an Evergreen Cemetery Association plan to create a soldiers annex requiring fee payments for interments (e.g., by families) was replaced by a plan by local attorney David Wills for a cemetery funded by the states. The Pennsylvania governor designated Wills the commonwealth's agent, who was authorized to purchase 17 acres (6.9 ha) for a cemetery, paying $2,475.87 for the land ($44,020 as of 2011).[7] Wills' September 23 invitation[8]:183 to Edward Everett requested an Oration on Wednesday, October 23;[9] but Everett asked for a later date to prepare (the ceremony was rescheduled for Thursday, November 19.[10] On November 2, Lincoln received formal notice[clarification needed] of Wills' invitation to participate.[11]

On October 27 from the Presbyterian graveyard on North Washington street (now defunct), the 1st of 3,512 Union Army bodies[8]:161 was moved to the new cemetery.[12] By November 19, a speaker's platform had been constructed, and "1258 had been reburied in the semicircular cemetery".[13]

On November 18 at 6:00 p.m., Abraham Lincoln and party (including his guest, Canadian politician William McDougall[14]) arrived at the Gettysburg Railroad Station.[1] Lincoln walked around the depot[citation needed] and uphill to the town square to spend the night in the Wills' house,[15] and a crowd gathered in the adjacent town square and was addressed by Secretary of State William H. Seward (Everett got to bed about 11 p.m.).[2] After Wells met with Lincoln about the ceremony c. 9:30; Lincoln's door guard, 1st Sgt Hugh Paxton Bigham of Company B (21st PA Cav.), provided a telegram to Lincoln that his son had improved--after which he asked his guard "at about 11 p.m." to take him to Seward.[16]:3 While meeting with Seward at the adjacent Robert Goodloe Harper house "around the corner", Lincoln was serenaded by the Baltimore Glee Club (National Union Musical Association) with We Are Coming, Father Abra'am (Bigham later "pushed" a return path through the crowd for Lincoln).[16]:5 Also posted through the night was a second military guard for Lincoln at the street-level door, Paxton's brother Rush Bigham.[16]:15

On November 19 c. 9 a.m. when his secretary went to Lincoln's room, “Mr. Nicolay…found him at work upon the address which he was to deliver. He continued to write, so far as the many interruptions gave him opportunity, up to the time it was necessary for him to take his place in the procession”.[17]:52 At 9:30 a.m., Lincoln on a chestnut bay horse[18] joined the procession to the cemetery with other dignitaries, townspeople, and widows.[3] "We passed along Baltimore Street to the Emmittsburg Road, minute guns being fired, then by way of the Taneytown Road to the cemetery, where the military formed in line to salute the President at about eleven o'clock."[19]:11

Scheduled events for the ceremony included:[6]:35

Music, by Birgfield's Band
Prayer, by Reverend T.H. Stockton, D.D.
The cloudy day became sunny during the reverend's prayer.[4]
Music, by the Marine Band
Oration, by Hon. Edward Everett
Everett's two-hourUNIQ5d4df1ec15823d6a-nowiki-00000064-QINU20UNIQ5d4df1ec15823d6a-nowiki-00000065-QINU delivery of 13,607 words described the battle and related its events and the war to previous wars and events.
Music, Hymn composed by Benjamin Brown French, Esq.
"A full view of the battlefield, with the Blue [Ridge] Mountains in the distance, was spread out before us, and all about were traces of the fierce conflict. Rifle pits, cut and scarred trees, broken fences, pieces of artillery wagons and harness, scraps of blue and gray clothing, bent canteens, abandoned knapsacks, belts, cartridge boxes, shoes and caps, were still to be seen on nearly every side — a great showing for relic hunters. … The Baltimore Glee Club then sang an ode written for the occasion by Commissioner B. B. French, of Washington, and Lincoln arose."[19]:12
Dedicatory Remarks, by the President of the United States
Lincoln took but a few minutes[21] for the "Address delivered at the dedication of the cemetery at Gettysburg"[22] (Boston reporter Charles Hale "took down the slow-spoken words of the President").[23]
Dirge, sung by Choir selected for the occasion
Benediction, by Reverend H.L. Baugher, D.D.

The program ended c. 4 p.m.[4] and, after attending most of a subsequent ceremony in the Presbyterian church with War of 1812 and Battle of Gettysburg veteran John L. Burns,[16] Lincoln departed via the Gettysburg Railroad c. 6 p.m..[3]

For reactions to, impact of, and memorials associated with Lincoln's address, see Legacy of the Gettysburg Address.

Following the ceremony, telegraphy regarding the program included at least three transmissions of Lincoln's address[24] (the New York Times report the next day included both Lincoln's address and the entire Everett Oration.)[4]

Wills requested a copy of Everett's oration via a December 14 letter, and Everett provided a copy with footnotes (e.g., describing the maps he used while composing).[8]:186 In 1864, Everett published his book regarding the consecration; and an 1867 record of the consecration ceremony was published with the associated correspondence.[8]