Pennsylvania Railroad, Connecting Railway Bridge is a stone arch bridge in Philadelphia, Pennsylvania that carries Amtrak Northeast Corridor and SEPTA commuter rail lines over the Schuylkill River. It is located in Fairmount Park, just upstream from the Girard Avenue Bridge.

The bridge was built 1866-67, by the Connecting Railway, a company affiliated with the Pennsylvania Railroad (PRR). Its purpose was to connect the PRR's southern and northern lines, and to be part of an eventual direct PRR line from Washington, DC to New York City. Before the bridge's construction, PRR trains took a circuitous route between PRR's West Philadelphia and North Philadelphia Stations.

The bridge was probably designed by John A. Wilson, chief engineer of the Connecting Railway Company, who surveyed the route in 1863. George Brooke Roberts, a PRR engineer, took over the project after Wilson's 1864 resignation, oversaw its whole construction, and later was president of the PRR. Thomas Seabrook was the masonry contractor. It opened to traffic on 2 June 1867. The Connecting Railway became a PRR subsidiary in 1871.[1]

The initial bridge was narrow, only 2 tracks, with an iron truss at mid-river. This was a 236-foot-3-inch-long (72 m) cast- & wrought-iron, arch-reinforced, double-intersection Whipple truss. In 1873, PRR slightly reduced the truss's span by widening the stone piers at each end. Probably at the same time, PRR removed the truss's reinforcing arch. In 1897, PRR replaced the Whipple truss with a Pratt truss of the same length.[2] 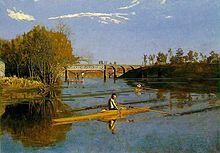 Max Schmitt in a Single Scull (1871) by Thomas Eakins. The original Connecting Railway Bridge is in the background, with the first Girard Avenue Bridge beyond.

Between 1912 and 1915, PRR more than doubled the width of the bridge to 5 tracks, and replaced the mid-river iron truss with two massive stone arches.[3] Alexander C. Shand was the designer of what was essentially a new bridge, built to look like the original. Eyre, Shoemaker, Inc. was the masonry contractor. Reiter, Curtis & Hill built the reinforced concrete bridges over Lansdowne Drive and West Girard Avenue, and the viaduct curving around the Philadelphia Zoo.[4]

The Connecting Railway Bridge, with its line of stone arches, was a frequent subject for painters. It appears in works by Carl Philipp Weber,[5] Edmund Darch Lewis, Thomas Moran, and, most famously, Max Schmitt in a Single Scull (1871) by Thomas Eakins.