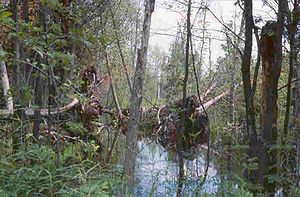 Coniferous swamps are forested wetlands in which the dominant trees are lowland conifers such as northern white cedar (thuja occidentalis). The soil in these swamp areas are typically saturated for most of the growing season and are occasionally inundated by seasonal storms or winter snow melt.

The substrate is usually organic in nature and may contain peat in varying amounts or be composed entirely of muck. The swamp substrate is typically nutrient rich and neutral to alkaline but can be acidic and nutrient poor.

Coniferous swamps vary in composition, with different species of conifer dominating, and varying amounts of deciduous hardwoods growing within the swamp. A wide diversity of plants are represented within the swamp with certain species dominating in a variety of microhabitats dependent on factors such as available sunlight as in cases of trees downed by wind or disease, soil Ph, standing groundwater and differences of elevation within the swamp such as tussocks and nurse logs.[1][2]

The different types of coniferous swamps are referred to according to their dominant trees rich conifer swamp dominated by Northern white-cedar which typically occur south of the climatic tension zone throughout the Midwest and northeastern United States and adjacent areas in Canada. North of the climatic tension zone, tamarack (Larix laricina) is the dominant species of conifer in minerotrophic wetlands, classified as a rich tamarack swamp. A roughly equal mix of hardwood trees and conifers a known as a hardwood-conifer swamp. 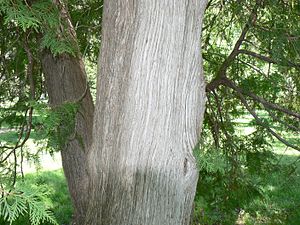 Bark of the Northern white cedar

A variety of both evergreen and deciduous trees may be present in the rich conifer swamp in addition to the dominant species.

A variety of grasses and sedges may be present including multiple varieties of carex.