Congress of Breda
For the 1667 Treaty negotiated between England and the Dutch Republic, see Treaty of Breda (1667). 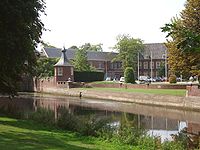 Breda Castle where some of the talks were held.

The Congress of Breda often also known as the Breda peace talks were a series of negotiations between representatives of Great Britain and France in the Dutch city of Breda that took place between 1746 and 1748. They were designed to bring an end to the Austrian War of Succession and laid the foundations for the ultimate peace settlement at the Treaty of Aix-la-Chapelle. They were not official peace talks, and lacked the participation of the other warring European states.

The War of the Austrian Succession had been raging since 1740 in one form or another, although Britain and France had only formally gone to war with each other in 1744. There was a strong anti-war faction in Britain, who grew in strength after a number of military setbacks. Equally in France there were those who advocated peace because the war was draining French resources and money. Talks were arranged and agreed to be held by representatives of the two states in the Dutch Republic, in practice a warring state allied to Britain, but officially neutral.

Lord Sandwich the chief British negotiator for much of the talks.

The British were represented by Lord Sandwich and the French by the Marquis de Puyzieulx.[1] Sandwich and the British delegation set up their headquarters in the pavilion of Breda Castle which was lent to them by their ally, William IV, Prince of Orange for the duration of the talks. Their instructions from the Duke of Newcastle were to prolong the talks until a significant British victory on the battlefield allowed them to negotiate from a position of strength. Although the French entered the talks following a string of victories, they had been beset by a financial crisis and wanted to bring the war to a swift conclusion.

The discussions convened in August 1746. Almost immediately they started to flounder, as it became apparent to both sides that the other was holding something back. France wanted to negotiate a treaty there and then, on behalf of their respective coalitions - but the British insisted that any settlement had to involve all parties. The British also rejected a French proposal to declare the Low Countries as "neutral territory" ending the war there, because they believed they would need the Dutch as allies in future conflicts.

Unsatisfied by his performance, the French had recalled Puyzieulx and replaced him. Sandwich stalled the talks for some time by demanding that his replacement proof his accreditation. There were further delays when a Spanish delegate turned up, claiming to have authority to represent the King of Spain. The British were constantly aware of the French negotiating strategy, as letters to the French delegates were intercepted and copied by postmasters in British pay.[2]

While there Sandwich was appointed British Ambassador to the Dutch Republic. In this role he was instrumental in a coup which helped the Prince of Orange take power in the Netherlands - a move that was designed to boost the anti-French coalition in Flanders.

In spite of this, by 1747 the Allied war situation had grown more grave following defeats at Lauffeld and Bergen op Zoom, and the British were forced to take the talks more seriously. Eventually an offer was made to exhange Madras captured by the French for Louisbourg which had been captured by the British in 1745. This provided the basis for further talks and agreements on the European state of affairs. France would withdraw from the Low Countries and Prussian control over Silesia would be recognised.

Despite their earlier insistence that any peace agreement must be drawn up between all parties, the British began to move towards agreeing the terms solely with France - and then presenting them to the other states to agree. To enable this a fresh congress at Aix-la-Chapelle was arranged, where all warring states would participate - to offer formal approval to the agreement between Britain and France.

The peace was formally concluded with the Treaty of Aix-la-Chapelle in 1748, in which all parties participated through the terms had already been agreed in advance by Britain and France at Breda. The terms proved deeply unsatisfactory to Maria Theresa of Austria who was outraged that Austria had lost Silesia and that the British had agreed this at Breda without any Austrians being present. In the long run this contributed to the breakdown of the Anglo-Austrian Alliance.

Sandwich was rewarded for his role at the Congress, by being made First Lord of the Admiralty, a post in the British cabinet. Newcastle and he were attacked by the Opposition for giving up Louisbourg, Britain's only significant gain in the war, to France. In France there was enormous disquiet about how France's seemingly advantageous position on the European continent had been given up. A phrase "as stupid as the peace" became popular in France, to express contempt for the terms agreed at Breda and Aix-la-Chapelle.[3]