Confession in the Lutheran Church 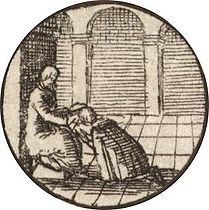 "Private Absolution ought to be retained in the churches, although in confession an enumeration of all sins is not necessary." —Augsburg Confession, Article 11

In the Lutheran Church, Confession (also called Holy Absolution) is the method given by Christ to the Church by which individual men and women may receive the forgiveness of sins; according to the Large Catechism, the "third sacrament" of Holy Absolution is properly viewed as an extension of Holy Baptism[1].

The Lutheran Church practices "Confession and Absolution" [referred to as the Office of the Keys] with the emphasis on the absolution, which is God's word of forgiveness. Indeed, Lutherans highly regard Holy Absolution. They, like Roman Catholics, see James 5:16 and John 20:22-23 as biblical evidence for confession.[2] Confession and absolution is done private to the pastor, called the "confessor" with the person confessing known as the "penitent". In confession, the penitent makes an act of contrition, as the pastor, acting in persona Christi, announces the formula of absolution. Prior to the confession, the penitent is to review the Ten Commandments to examine his or her conscience.[3] In the Lutheran Church, like the Roman Catholic Church, the pastor is bound by the Seal of the Confessional. Luther's Small Catechism says "the pastor is pledged not to tell anyone else of sins to him in private confession, for those sins have been removed." If the Seal is broken, it will result in excommunication.[2] In the nineteenth and twentieth centuries, private confession fell into disuse; at the present time, it is, for example, expected before partaking of the Eucharist for the first time.[4] It is also encouraged to be done frequently in a year[5] (specifically before Easter). In many churches, times are set for the pastor to hear confessions.[6]

In his 1529 catechisms, Martin Luther praised confession (before a pastor or a fellow Christian) "for the sake of absolution", the forgiveness of sins bestowed in an audible, concrete way.[7] The Lutheran reformers held that a complete enumeration of sins is impossible[8] and that one's confidence of forgiveness is not to be based on the sincerity of one's contrition nor on one's doing works of satisfaction imposed by the confessor (penance).[9] The Roman Catholic church held confession to be composed of three parts: contritio cordis ("contrition of the heart"), confessio oris ("confession of the mouth"), and satisfactio operis ("satisfaction of deeds").[10] The Lutheran reformers abolished the "satisfaction of deeds," holding that confession and absolution consist of only two parts: the confession of the penitent and the absolution spoken by the confessor.[11] Faith or trust in Jesus' complete active and passive satisfaction is what receives the forgiveness and salvation won by him and imparted to the penitent by the word of absolution. 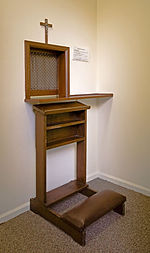 A modern confessional at a Lutheran church in Columbus, Georgia, United States.

Lutheran confession (in the same manner as confession in the Catholic Church) can be done in the church chancel with the penitent kneeling at the altar rail and the pastor sitting in front of them, in the privacy of the pastor's office, or sometimes in a confessional. The words below, taken from the Lutheran Service Book and used in most confessions, say:

The penitent begins by saying:

Please hear my confession and pronounce forgiveness in order to fulfill God's will. I, a poor sinner, plead guilty before God of all sins. I have lived as if God did not matter and as if I mattered most. My Lord's name I have not honored as I should; my worship and prayers have faltered. I have not let His love have its way with me, and so my love for others has failed. There are those whom I have hurt, and those whom I have failed to help. My thoughts and desires have been spoiled with sin. What troubles me particularly is that...

Here, the penitent is to confess whatever they have done against the commandments of God, according to their own place in life. The penitent continues.

I am sorry for all of this and ask for grace. I want to do better.

God be merciful to you and strengthen you faith. Do you believe that my forgiveness is God's forgiveness?

The penitent will say:

The pastor places his hand on the head of the penitent and says the following:

In the stead and by the command of my Lord Jesus Christ I forgive you all your sins in the name of the Father and of the + Son and of the Holy Spirit. Amen.

The pastor dismisses the penitent.