The Riegelmann Boardwalk running along the sand's edge.

The boardwalk, built in 1923,[1] stretches for 2.51 miles from West 37th Street at the border of Coney Island and Sea Gate to Brighton 14th Street in Brighton Beach.

Many of its most famous amusement parks no longer exist, but the boardwalk still hosts the Coney Island Cyclone roller coaster and the Wonder Wheel Ferris wheel, as well as the New York Aquarium. The more recent MCU Park is home of the minor-league Brooklyn Cyclones baseball team. 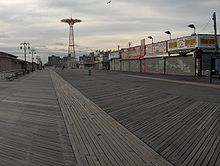 The Riegelmann Boardwalk has a steel and concrete foundation supporting wood planking for the walkway. Restroom facilities, benches and waterfountains are located along its length. As of October 2010, the city has been renovating the boardwalk: parts will receive new wood planking over concrete supports, and parts will be replaced with concrete entirely, for lower maintenance cost.[2][3]