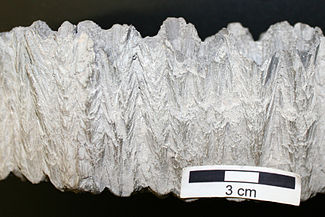 Cone-in-cone structures are secondary sedimentary structures that form in association with deeper burial and diagenesis. They consist of concentric inter-bedded cones of calcite or more rarely gypsum, siderite or pyrite[1][2][3][4]. Although several mechanisms may be responsible for the formation of cone-in-cone structures, displacive crystal mechanism is preferred. It accounts for the most uniform and consistent explanation of growth and why cone-in-cone can occur with such variable composition.

The formation of cone-in-cone structures has been attributed to:

In all cases the common trend is for crystal formation to begin within partially consolidated sediment. As cone-in-cone formation happens it begins to take up more and more space within the sediment bed which begins to cause pressure. The pressure results in the cone shape, as parts of the structure are under greater or lesser pressures and grow differentially based on these varying pressures. The nature of displacement from crystal growth has lead many to believe that most of the actual precipitation occurs very early during shallow burial. Some have concluded that, based upon 18O depleted values from some of the cone-in-cone material that they can form later, perhaps at hundreds of meters of burial depth.[3]

Cone-in-cone structures have been known since the late 1700s, and people have attempted to explain the reasons for their formations. One of the earlier explanations was actually on par with the currently accepted methods for formation as discussed above. Some of the other methods offered for their formation were given by Shaub (1937)[7]. It was suggested that the formation of cone-in-cone resulted from volume shrinkage and slow dewatering of highly saturated and loosely packed materials. He suggests that partially developed conical surfaces are also possible as a result of pressure developed from overlying sediments under conditions where a unilateral release of horizontal pressure may become effective. He goes on to suggest that the current explanations of his time are inadequate to cover the structure and its formation. He even suggested that formation due to crystallization was not consistent.[7] This growth due to crystallization is a significant portion of the currently accepted mode of formation.