Condensation can be summarized as a phase transition from a gas to a liquid as vapor condenses on a pre-existing surface, the exact opposite of the transition from liquid to vapor which occurs in evaporation. Both condensation and evaporation are happening all the time; atmospheric conditions determine which of them dominates. When the vapor is condensing, the particles on which the vapor condenses will grow bigger, in the same way when vapor evaporates from a particle, it will shrink. This can be seen in the size distribution of aerosol. When the vapor is condensing, then the size distribution moves to bigger sizes: on the contrary, when the vapor is evaporating it moves towards smaller sizes. As the size distribution grows towards bigger or smaller sizes, the airborne mass concentration increases or decreases respectively. In the atmosphere, condensation by for example H2SO4 and organic compounds is the main growth mechanism. 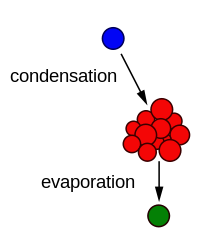 The conditions such as vapor pressure and temperature around the particle determine the dominant process (condensation or evaporation). Following the Kelvin effect (based on the curvature of liquid droplets) smaller particles need a higher ambient relative humidity to maintain equilibrium than bigger ones would. Relative humidity (%) for equilibrium can be determined from the following formula:

Kelvin equation for saturation vapor pressure above a curved surface is:

Figure 2: The big droplet is formed of many droplets A contained in air B.

where a is the particle radius, P are the pressures far from the droplet and at the surface of the droplet respectively, kb is the Boltzmann constant, T is the temperature, CA is mean thermal velocity and α is mass accommodation coefficient. It is assumed in the derivation of this equation that the pressure and the diffusion coefficient are constant.

The continuum regime is for bigger particles with dp > 200 nm or Kn << 1. In this regime, the particles are big enough to "see" their environment as a continuum. The molecular flux in this regime is:

where a is the radius of the particle A, MA is the molecular mass of the particle A, DAB is the diffusion coefficient between particles A and B, R is the ideal gas constant, T is the temperature in kelvins and P are the pressures at infinite and at the surface respectively.

where Icont is the mass flux in the continuum regime and Kn is the Knudsen number. This formula is called the Fuchs-Sutugin interpolation formula.

These equations don’t take into account the heat release effect.