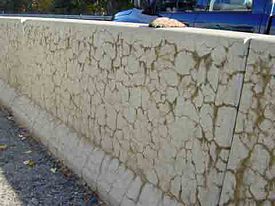 Typical crack pattern associated to the alkali-silica reaction affecting a concrete step barrier on a US motorway (photograph, courtesy of the Federal Highway Administration (US Department of Transportation).

Various types of aggregate undergo chemical reactions in concrete, leading to damaging expansive phenomena. The most common are those containing reactive silica, that can react (in the presence of water) with the alkalis in concrete (K2O and Na2O, coming principally from cement). Among the more reactive mineral components of some aggregates are opal, chalcedony, flint and strained quartz. Following the alkali-silica reaction (ASR), an expansive gel forms, that creates extensive cracks and damage on structural members. On the surface of concrete pavements the ASR can cause pop-outs, i.e. the expulsion of small cones (up to 3 cm (1 in) about in diameter) in correspondence of aggregate particles. When some aggregates containing dolomite are used, a dedolomitization reaction occurs where the magnesium carbonate compound reacts with hydroxyl ions and yields magnesium hydroxide and a carbonate ion. The resulting expansion may cause destruction of the material. Far less common are pop-outs caused by the presence of pyrite, an iron sulfide that generates expansion by forming iron oxide and ettringite. Other reactions and recrystallizations, e.g. hydration of clay minerals in some aggregates, may lead to destructive expansion as well.

The expansion of the corrosion products (iron oxides) of carbon steel reinforcement structures may induce mechanical stress that can cause the formation of cracks and disrupt the concrete structure. If the rebars have been poorly installed and are located too close to the concrete surface in contact with the air, spalling can easily occur: flat fragments of concrete are detached from the concrete mass by the rebars corrosion and may fall down. 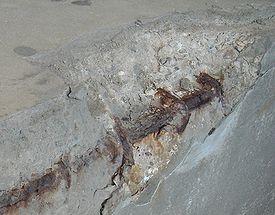 Carbon dioxide from air can react with the calcium hydroxide in concrete to form calcium carbonate. This process is called carbonation, which is essentially the reversal of the chemical process of calcination of lime taking place in a cement kiln. Carbonation of concrete is a slow and continuous process progressing from the outer surface inward, but slows down with increasing diffusion depth. Carbonation has two effects: it increases mechanical strength of concrete, but it also decreases alkalinity, which is essential for corrosion prevention of the reinforcement steel. Below a pH of 10, the steel's thin layer of surface passivation dissolves and corrosion is promoted. For the latter reason, carbonation is an unwanted process in concrete chemistry. Carbonation can be tested by applying Phenolphthalein solution, a pH indicator, over a fresh fracture surface, which indicates non-carbonated and thus alkaline areas with a violet color.

Chlorides, particularly calcium chloride, have been used to shorten the setting time of concrete.[1] However, calcium chloride and (to a lesser extent) sodium chloride have been shown to leach calcium hydroxide and cause chemical changes in Portland cement, leading to loss of strength,[2] as well as attacking the steel reinforcement present in most concrete.

Sulfates in solution in contact with concrete can cause chemical changes to the cement, which can cause significant microstructural effects leading to the weakening of the cement binder.

When water flows through cracks present in concrete, water may dissolve various minerals present in the hardened cement paste or in the aggregates, if the solution is unsaturated with respect to them. Dissolved ions, such as calcium (Ca2+), are leached out and transported in solution on a some distance. If the physico-chemical conditions prevailing in the seeping water evolve with distance along the water path and water becomes supersaturated with respect to certain minerals, they can further precipitate, making deposits or efflorescences inside the cracks, or at the concrete outer surface. This process can cause the self-healing of fractures in particular conditions.

Concrete exposed to seawater is susceptible to its corrosive effects. The effects are more pronounced above the tidal zone than where the concrete is permanently submerged. In the submerged zone, magnesium and hydrogen carbonate ions precipitate a layer of brucite, about 30 micrometers thick, on which a slower deposition of calcium carbonate as aragonite occurs. These layers somewhat protect the concrete from other processes, which include attack by magnesium, chloride and sulfate ions and carbonation. Above the water surface, mechanical damage may occur by erosion by waves themselves or sand and gravel they carry, and by crystallization of salts from water soaking into the concrete pores and then drying up. Pozzolanic cements and cements using more than 60% of slag as aggregate are more resistant to sea water than pure Portland cement. Sea water corrosion contains elements of both chloride and sulfate corrosion.

Bacteria themselves do not have noticeable effect on concrete. However, anaerobic bacteria (Thiobacillus) in untreated sewage tend to produce hydrogen sulfide, which is then oxidized by aerobic bacteria present in biofilm on the concrete surface above the water level to sulfuric acid. The sulfuric acid dissolves the carbonates in the cured cement and causes strength loss, as well as producing sulfates which are harmful to concrete. Concrete floors lying on ground that contains pyrite (iron(II) sulfide) are also at risk. Using limestone as the aggregate makes the concrete more resistant to acids, and the sewage may be pretreated by ways increasing pH or oxidizing or precipitating the sulfides in order to inhibit the activity of sulfide utilizing bacteria.

Damage can occur during the casting and de-shuttering processes. For instance, the corners of beams can be damaged during the removal of shuttering because they are less effectively compacted by means of vibration (improved by using form-vibrators). Other physical damage can be caused by the use of steel shuttering without base plates. The steel shuttering pinches the top surface of a concrete slab due to the weight of the next slab being constructed.

Due to its low thermal conductivity, a layer of concrete is frequently used for fireproofing of steel structures. However, concrete itself may be damaged by fire.

Up to about 300 °C, the concrete undergoes normal thermal expansion. Above that temperature, shrinkage occurs due to water loss; however, the aggregate continues expanding, which causes internal stresses. Up to about 500 °C, the major structural changes are carbonation and coarsening of pores. At 573 °C, quartz undergoes rapid expansion due to Phase transition, and at 900 °C calcite starts shrinking due to decomposition. At 450-550 °C the cement hydrate decomposes, yielding calcium oxide. Calcium carbonate decomposes at about 600 °C. Rehydration of the calcium oxide on cooling of the structure causes expansion, which can cause damage to material which withstood fire without falling apart. Concrete in buildings that experienced a fire and were left standing for several years shows extensive degree of carbonation from carbon dioxide which is reabsorbed.

Concrete exposed to up to 100 °C is normally considered as healthy. The parts of a concrete structure that is exposed to temperatures above approximately 300 °C (dependent of water/cement ratio) will most likely get a pink color. Over approximately 600 °C the concrete will turn light grey, and over approximately 1000 °C it turns yellow-brown.[3] One rule of thumb is to consider all pink colored concrete as damaged that should be removed.

Fire will expose the concrete to gases and liquids that can be harmful to the concrete, among other salts and acids that occur when gases produced by a fire come into contact with water.

Exposure of concrete structures to neutrons and gamma radiations in nuclear power plants and high-flux material testing reactor can induce radiation damages in their concrete structures. Paramagnetic defects and optical centers are easily formed, but very high fluxes are necessary to displace a sufficiently high number of atoms in the crystal lattice of minerals present in concrete before significant mechanical damages are observed.