Confederation of Indigenous Nationalities of Ecuador

Confederation of Indigenous Nationalities of Ecuador 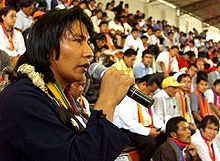 The Confederation of Indigenous Nationalities of Ecuador (Spanish: La Confederación de Nacionalidades Indígenas del Ecuador) or more commonly, CONAIE, is Ecuador's largest indigenous organization. Formed in 1986, CONAIE has pursued social change on behalf of the region's significant native population using a wide range tactics including direct action. CONAIE is most well known for its organization of popular uprisings ("levantamientos populares") that often include blockading of commercial arteries and the takeover of government buildings.

CONAIE's political agenda includes the strengthening of a positive indigenous identity, recuperation of land rights, opposition to neoliberalism, and a rejection of U.S. military involvement in South America (for example Plan Colombia).

Most recently, CONAIE was a primary force behind the ousting of President Lucio Gutiérrez, who was widely perceived as corrupt and beholden to neoliberal influence.

CONAIE was founded at a convention of some 500 indigenous representatives on November 13-November 16, 1986.

Initially explicitly rejecting the use of the electoral process, CONAIE developed an economic and political strategy to redefine and implement participatory democracy. Simultaneously, CONAIE called for the conversion of Ecuador into a multi-nation state recognizing the national autonomy of 12 indigenous nations, run by "popular parliaments".

Throughout the 1990s, CONAIE repeatedly mobilized thousands of indigenous campesinos to shut down Quito, clogging the streets with traditional dance, art and song while making demands of the political structure via direct negotiation. These protests often came in response to International Monetary Fund (IMF) policies.

CONAIE adopted a programme with these 16 demands:

In 1992 CONAIE organized a march of indigenous peoples to Quito in order to protest government policies and celebrate indigenous culture on the 500-year anniversary of Columbus’ arrival to the Americas. As a result of the strong protests, the Ecuadorian government was forced into a discussion with the indigenous Ecuadorians. The talks led to the government’s granting of over 16,000 square kilometers of land to indigenous organizations, one of the largest land rights concessions in the history of Latin America. While still facing resistance from the government, CONAIE was becoming recognized as an important force that would undoubtedly play a major role in the future of the country.

In 1994 another massive mobilization was realized in response to a new neo-liberal Agrarian Reform Law and a World Bank loan granted in order to privatize the oil sector. The oil deal threatened physical damage indigenous groups (earlier oil exploration had led to contamination of water and environmental degradation) in the Amazon and loss of their land holdings. The Agrarian Reform Law was an attempt to sell communally held land to stimulate competition and productivity, reduce and consolidate indigenous land holdings, and privatize the water system, all of which represented great threats to indigenous livelihood. Because of the ferocity of the uprising and criticism of the government led by CONAIE, the land reform and water privatization basically disappeared and although the oil privatization passed, indigenous groups gained some protection. In short, however, in 1994 the process of globalization was well underway and it constituted immense danger for all indigenous groups in Ecuador because of the potential for loss of land, sovereignty, and the destruction of their natural habitats. CONAIE had achieved much, but still lacked that vital connection to mainstream politics that held the key to protecting indigenous communities.

Prior to 1996 CONAIE had been very untrusting of politicians and wary of those who sought to become involved in politics because of politicians' tendency to make concessions. Nevertheless the situation in Ecuador, especially in the Amazon region of the Oriente, was becoming desperate, as oil exploration was due to increase at any moment. Rumblings began within the organization to adapt to the political process, but a statute was passed in 1995 by CONAIE prohibiting members from running for political office. In 1996, CONAIE reversed its stand on elections and played a major role in the formation of Pachakutik (Pluri-National Pachakutik United Movement - New Country), an electoral coalition of indigenous and non-indigenous social movements including CONFEUNASSC-CNC, Ecuador's largest campesino federation.

Although Pachakutik won many local and congressional seats, it failed to garner significant votes in Ecuador's presidential 1996 election.

In August 1997 CONAIE led two straight days of protest against the lack of constitutional reform and held the government accountable, as the process was thereafter soon underway with the appointing of the Assembly of Constitutional Reform. What followed this process was a new constitution that brought CONAIE and the indigenous movement the greatest success in the history of its existence.

The changes to Ecuador’s constitution in 1998 were not solely related to indigenous demands, but it changed the role of indigenous people in Ecuadorian society completely. The actual wording of the constitution defined Ecuador as a multiethnic and multicultural state, which would set the groundwork for the respect of indigenous rights that had been sought for so long. Many new rights were explicitly granted to indigenous groups in the new document, including “the right to maintain, develop, and fortify their spiritual, cultural, linguistic, social, political and economic identity and traditions.” Through the constitution the state was given many new responsibilities and standards to follow in terms of environmental conservation, the elimination of contamination, and sustainable management. Related to this was the right given to all people (targeted toward indigenous communities) that they must give prior consent before projects can be undertaken on their lands which will affect their lands. Finally, the document provides protection of self-determination among indigenous lands, preserving traditional political structures, and follows International Labour Organization, Convention 169 that outlines generally accepted international law on indigenous rights. All of these points had been sought after for so many years and were finally guaranteed in this rewrite of the most important document in the country.

Despite CONAIE and Pachakutik’s triumph in this endeavor, government implementation of the policy has not exactly been consistent with the outline in that new constitution and the indigenous organizations have struggled since 1998. In cases such as Arco’s deal to exploit oil resources in the Amazon, the government has totally ignored these new indigenous rights and sold communal land to be developed without another thought. Such violations have become commonplace and the reformation of the constitution seems in many ways to have just been a populist tactic used by the government to appease the indigenous groups while continuing to persistently pursue its neoliberal agenda. Because of this there has been an increasing amount of tension and differences of opinion within the indigenous movement, both between Pachakutik and CONAIE and within CONAIE itself. There even exists frustration among local tribes and the efforts of CONAIE because of the inability to stop the aggression of the government despite all that had been achieved.

On January 21, 2000, in response to President Jamil Mahuad's proposed dollarization of the Ecuadorian economy, CONAIE, in coordination with organizations like CONFEUNASSC-CNC, blocked roads and cut off agricultural supplies to Ecuador's major cities. At the same time, rural indigenous protesters marched on Quito. In response, government officials ordered transit lines not to service Indians and individuals with indigenous characteristics were forcibly removed from interprovincial buses in an effort to prevent protesters from reaching the capitol. Nevertheless, 20,000 arrived in Quito where they were joined by students, local residents, 500 military personnel, and a group of rogue colonels.

The coup was made possible by the support of the military; however, the military's influence also served to deflate the revolutionary potential of the popular uprising. Only a few hours after taking the presidential palace, Col. Lucio and other collaborators handed over power to the armed forces' chief of staff, General Carlos Mendoza. That night Mendoza was contacted by the Organization of American States as well as the U.S. State Department, which hinted at the imposition of a Cuban-style isolation on Ecuador if power was not returned to the neoliberal Mahuad administration. Additionally, Mendoza was contacted by senior White House policy makers who threatened to end all bilateral aid and World Bank lending to Ecuador. The next morning, General Mendoza dissolved the new government and ceded power to Vice President Gustavo Noboa.

2002 elections and the FTAA 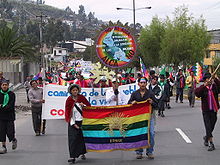 Members of CONAIE marched against the FTAA summit in Quito (October 31, 2002)

In 2002, CONAIE split its resources between political campaigning and a mobilization against the Free Trade Area of the Americas (FTAA) 7th Summit, which was being held in Quito.

In the presidential elections CONAIE backed populist Lucio Gutiérrez, a military man who had supported the 2000 coup. Gutiérrez was not widely trusted, but he was seen as the only alternative to rival candidate Álvaro Noboa, the richest man in Ecuador who embodied popular fears of crony capitalism.

Lucio Gutiérrez won the presidential race with 55% of the final vote, owing much of his victory to support from Pachakutik.

Six months after the election of Gutiérrez, CONAIE proclaimed its official break with the government in response to what CONAIE termed a betrayal of "the mandate given to it by the Ecuadorian people in the last elections." Among other things, Gutiérrez's signing of a Letter of Intent with the International Monetary Fund sparked outrage. (see Indigenous Movement Breaks with President Lucio Guiterrez)

In 2005, CONAIE participated in an uprising which ousted president Lucio Gutiérrez. In an April 2005 Assembly of Peoples, and in their own contentious assembly in May, CONAIE made public calls for the ouster of both Gutiérrez and the entire mainstream political class under the slogan "Que se vayan todos" (They all must go), a phrase popularized by the December 2001 Argentine uprising.

In August 2005 CONAIE called for action among indigenous peoples in the Sucumbios and Orellana provinces to protest political repression, Petrobras' attempt to expand their petroleum extracting activities to the Yasuní National Park, and the general activities of Occidental Petroleum in the Amazon. Hundreds of protestors from the Amazon region took control of airports and oil installations in the two provinces for five days, which has prompted a strong response from Alfredo Palacio's government in Quito. The government called for a state of emergency in the two provinces and the army was sent in to disperse the protestors with tear gas, but in response to the growing crisis the state oil company has temporarily suspended exports of petroleum. Protestors have gone on record as saying that they want oil revenues to be redirected toward society, making way for more jobs and greater expenditures in infrastructure.