The Comus class was a class of Royal Navy steam corvettes, re-classified as third-class cruisers in 1888. All were built between 1878 and 1881. The class exemplifies the transitional nature of the late Victorian navy. In design, materials, armament, and propulsion the class members resemble their wooden sailing antecedents, but blended with characteristics of the all-metal mastless steam cruisers which followed.

Despite their qualities they had relatively short commissions, as they soon were rendered superfluous by the "flood of warships" built under the Naval Defence Act of 1889. By the turn of the century all were in reserve, relegated to subsidiary duties, or being scrapped.[2]

Great Britain had a worldwide empire, founded and sustained by seaborne commerce. To protect this trade and police its empire, Britain constructed many small and medium-sized cruisers, the latter typically armed with guns up to six inches in calibre. They were designed to serve long periods at sea, and therefore were equipped with sails. The nine Comus-class corvettes and their later derivatives — the two Calypso-class corvettes — were ships of this type.[3]

Planning for six metal-hulled corvettes began in 1876.[4] These vessels, which became the Comus-class corvettes, were designed by Nathaniel Barnaby. Among the Royal Navy’s last sailing corvettes,[5] they supplemented an extensive sail rig with powerful engines. Unlike their French rivals, which built fast steamers and needed neither long range nor a full rig of sail, the Royal Navy required their cruisers to be capable of long voyages away from coaling stations, and a beamy hull to handle their sails.[4]

They were similar in appearance and layout to the older wooden and composite-hulled small cruisers they were intended to replace,[5] albeit larger and more powerfully armed.[4] The vessels were among the first of the smaller cruisers to be given metal hulls;[5] with frames of iron or steel.[6] The forefoot formed a ram forged from brass, a feature in vogue at the time.[7] In common with older wooden vessels, their hulls had copper sheathing over timber beneath the waterline, but that timber simply encased the hull beneath, rather than being the hull itself. Had the iron hull itself been exposed to water, especially in the tropics, marine growth would quickly have fouled it, creating drag and significantly reducing speed. Copper had effective anti-fouling properties, but could not be affixed directly to iron as electrolytic corrosion would result. The metal hulls therefore were encased in wood, to which was attached the copper sheathing.[8] The timber extended to the upper deck; it was in two layers from the keel to 3 ft (.9 m) above the water line, and one layer above.[9]

The contracts for these first six vessels were all awarded to the Clydeside shipbuilder John Elder & Company, at Govan, an early case of a single builder taking responsibility for building an entire class. They were all fitted with 3-cylinder compound engines, with one high-pressure cylinder of 46 inches diameter being flanked by two low-pressure cylinders of 64 inches diameter.

Two/three years later, the Admiralty ordered an additional three vessels to be built to the same design. However, construction of these was awarded to the Royal Dockyards at Chatham and at Portsmouth. This second batch differed by carrying a barque rig, compared with the ship rig of the first six ships; in addition, the compound engines in the new batch were of 4-cylinder type, with two high-pressure cylinders of 36 inches diameter and two low-pressure cylinders of 64 inches diameter. 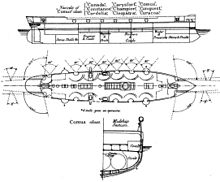 Diagrams of the Comus class

In the Comus class, the bow above the waterline was nearly straight, in contrast to wooden sailing ships. They had stern galleries, similar to older frigates, but the ports were false, and there were no quarter galleries.[7] Boats were carried both amidships and at the stern.[10] They flew a barque or ship rig of sail on three masts,[11] including studding sails on fore and mainmasts.[12] The masts were stayed by shrouds which were anchored to chainplates affixed to the inside of the gunwales, rather than the exterior as in wooden sailing ships. Their sailing rigs enabled them to serve in areas where coaling stations were rare, and to rely on their sails for propulsion.

The vessels had two complete decks, upper and lower, with poop and forecastle decks. The poop deck contained cabins for the captain, first lieutenant, and navigating officer, with the double wheel sheltered under its forward end. The forecastle was used for the heads and working space for the cables. Between these was the open quarterdeck on which the battery was located. Under the lower deck were spaces for water, provisions, coal, and magazines for shell and powder. Amidships were the engine and boiler rooms. These were covered by an armoured deck, 1.5 inches (38 mm) thick and approximately 100 ft (30 m) long. This armour was about 3 ft (90 cm) underneath the lower deck, and the space between could be used for additional coal bunkerage. The machinery spaces were flanked by coal bunkers, affording the machinery and magazines some protection from the sides. The lower deck was used for berthing of the ship's company; officers aft, warrant and petty officers forward, and ratings amidships, as was traditional. The tops of the coal bunkers, which projected above deck level, were used for seating at the mess tables. The living spaces were well-ventilated and an improvement over prior vessels.[13]

There were some refinements in the design among class members, and the armament in particular changed during their careers. In 1881 an enlarged version of the design was drawn up by Barnaby, with the hull being lengthened by another 10ft. Two ships were ordered to this later design, which became the Calypso class. The Comuses and Calypsos were sometimes called the "C class" of corvettes, an informal term rather than an official designation.

Comus was armed with two 7-inch muzzle-loading rifles, eight 64-pounder muzzle-loading rifles and four breech-loading 6-inch 80-pounder guns, but the breech loaders proved unsatisfactory.[1] The rest of the class were provided with four more 64-pounders in place of the 6-inch breech loaders, except for Canada and Cordelia, which exchanged all the muzzle loaders for ten of the new 6-inch Mk II breech loading guns. A selection of light guns and Nordenfelt quick-firing guns, as well as a pair of torpedo carriages, were also carried. The large guns were in embrasures in the bulwarks of the upper deck, as was a common (and to some extent a differentiating) feature of steam corvettes, as most frigates carried their main armament one deck lower.[14] The details of the main armament varied between the vessels, and during their careers, as all of the original nine were rearmed after their first commissions.