Illustration of the interaction of the various computer-aided technologies. 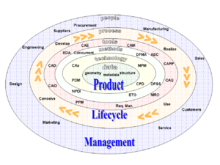 CAx tools in the context of product lifecycle management

Computer-aided technologies (CAx)[1] is a broad term that means the use of computer technology to aid in the design, analysis, and manufacture of products.

The term CAD/CAM (computer-aided design and computer-aided manufacturing) is also often used in the context of a software tool that covers a number of engineering functions. 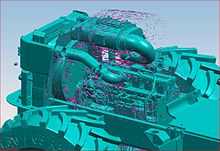 Simulation of airflow over an engine