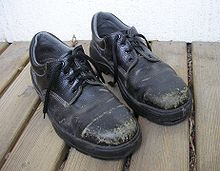 A pair of well-worn steel-toe shoes. 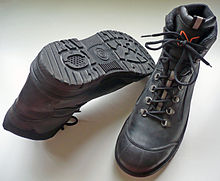 A steel-toe boot (also known as a safety boot, steel-capped boot or safety shoe) is a durable boot or shoe that has a protective reinforcement in the toe which protects the foot from falling objects or compression, usually it is combined with a mid sole plate to protect against punctures from below.

Although traditionally made of steel, the reinforcement can also be made of a composite material, a plastic such as thermoplastic polyurethane (TPU) or even Aluminum. Steel-toe boots are important in the construction industry and in many industrial settings. Occupational safety and health legislation or insurance requirements may require the use of such boots in some settings, and may mandate certification of such boots and the display of such certification directly on the boots. In Canada, certified boots have a Canadian Standards Association green triangle on them.

Safety footwear now comes in many styles, including sneakers and clogs. Some are quite formal, for supervising engineers who must visit sites where protective footwear is mandatory.

Some brands of steel-toe footwear, particularly Dr. Martens and Grinders, have become fashionable within subcultures such as skinhead, punk, and rivethead. Brands that were previously renowned within the fashion industry also diversified into the safety footwear market, Dunlop and Puma to name a few. But also industrial brands like Caterpillar, Michelin and JCB have given out licenses to produce safety footwear.

Most safety shoes have symbols on the outside, to indicate the protection the shoe offers. Examples are:

The Canadian Standards Association (CSA) have been using symbols on safety footwear for a total of 13.5 years. Each shape & color represents specific safety criteria for all safety footwear and apearal purchased in Canada. (A useful chart is available on-line describing the CSA symbols)

Generally, a safety shoe is a shoe that follows at least one of five criterion. The criteria that a safety shoe adheres to can be found by looking for the CSA (Canadian Standards Association) alphanumerical code found inside the shoe. This code is made up of a combination of 5 different symbols: 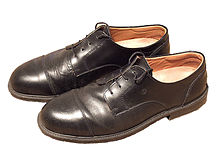 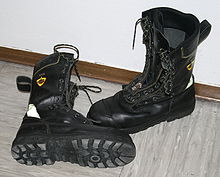 The codes applicable to European safety footwear are:

Safety shoe standards in Asia are :

Use as a weapon

Steel-toe boots have been used in assaults, such as the attack on Josie Lou Ratley, a Florida teenager.[8] Nightclubs and other entertainment venues frequently include a "no steel toecaps" rule as part of their dress code to mitigate the possibility of serious injury to other patrons if the wearer becomes violent.[9][10][11]