Mixed-member proportional representation, also termed mixed-member proportional voting and commonly abbreviated to MMP, is a voting system originally used to elect representatives to the German Bundestag, and nowadays adopted by numerous legislatures around the world. MMP is similar to other forms of proportional representation (PR) in that the overall total of party members in the elected body is intended to mirror the overall proportion of votes received; it differs by including a set of members elected by geographic constituency who are deducted from the party totals so as to maintain overall proportionality. It is similar to the additional member system used in the United Kingdom, but the AMS system has no overhang seats (see below).

MMP is known as personalized proportional representation in Germany, where it is used on the federal level and on most state levels, the Länder. In Quebec, where an MMP model was studied in 2007,[1] it is called the compensatory mixed-member voting system (système mixte avec compensation or SMAC). New Zealand adopted MMP to elect its House of Representatives in 1993, and the use of the system is currently under review by a referendum on 26 November 2011.

In most models the voter casts two votes: one for a constituency representative and one for a party. If a candidate is on the party list, but wins a constituency seat, they do not receive two seats; they are instead crossed off the party list and replaced with the next candidate down. In the original variant used at first in Germany, still used by two States of Germany until 2010, both votes were combined into one, so that voting for a representative automatically means also voting for the representative's party. Most of Germany changed to the two-vote variant to make local MPs more personally accountable; the state of NorthRhine-Westphalia finally made the change in 2010. Voters can vote for the local person they prefer for local MP without regard for party affiliation, since the partisan make-up of the legislature is determined only by the party vote. In the 2005 New Zealand election, 20% of local MPs were elected from electorates (constituencies) which gave a different party a plurality of votes.

In Bavaria the second vote is not simply for the party but for one of candidates on the party's regional list: Bavaria uses seven regions for this purpose. A regional open-list method was also recommended for the United Kingdom by the Jenkins Commission and for Canada by the Law Commission of Canada.

In Baden-Württemberg there are no lists; they use the "best near-winner" method in a four-region model, where the regional members are the local candidates of the under-represented party in that region who received the most votes in their local constituency without being elected in it.

In each constituency, the representative is chosen using a single winner method, typically first-past-the-post (that is, the candidate with the most votes, by plurality, wins).

At the regional or national level (i.e. above the constituency level) several different calculation methods have been used, but the basic characteristic of the MMP is that the total number of seats in the assembly, including the single-member seats and not only the party-list ones, are allocated to parties proportionally to the number of votes the party received in the party portion of the ballot. This can be done by the largest remainder method or a highest averages method: either the D'Hondt method or the Sainte-Laguë method. Subtracted from each party's allocation is the number of constituency seats that party won, so that the additional seats are compensatory (top-up). If a party wins more FPTP seats than the proportional quota received by the party-list vote, these surplus seats become overhang seats to restore a full proportionality.

When a party wins more constituency seats than it would be entitled to from its proportion of (party list) votes, overhang seats can occur.

In Germany's Bundestag and the New Zealand House of Representatives, all these constituency members keep their seats. For example, in New Zealand's 2005 General Election the Māori Party won 2.1% of the Party Vote, which would entitle them to 3 seats in the House, but won 4 constituency seats, leaving an overhang of 1 seat, which resulted in a 121-member house. If the party vote for the Māori Party had been more in proportion with the constituency seats won, there would have been a normal 120-member house.

In most German states, the other parties receive extra seats ("balance seats") to create full proportionality. For example, the provincial parliament (Landtag) of North Rhine Westphalia has, instead of the usual 50% compensatory seats, only 29% unless more are needed to balance overhangs. If a party wins more local seats than its proportion of the total vote justifies, the size of the Landtag increases so that the total outcome is fully proportional to the votes, with other parties receiving additional list seats to achieve that.

As in numerous proportional systems, in order to be eligible for list seats in many MMP models, a party must earn at least a certain percentage of the total party vote, or no candidates will be elected from the party list. Candidates having won a constituency will still have won their seat. In Germany and New Zealand the threshold is 5%, in Bolivia 3%. A party can also be eligible for list seats if it wins at least three constituency seats in Germany, or at least one in New Zealand. Having a member with a 'safe' constituency seat is therefore a tremendous asset to a minor party in New Zealand. 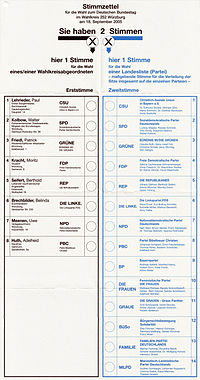 MMP is currently in use in:

In March 2004 the Law Commission of Canada proposed a system of MMP,[3] with only 33% of MPs elected from regional open lists, for the Canadian House of Commons[4] but Parliament’s consideration of the Report in 2004-5 was stopped after the 2006 election.

A proposal to adopt MMP with closed province-wide lists for elections to the Legislative Assembly of Prince Edward Island was defeated in a plebiscite there on November 28, 2005.[citation needed]

In 2007 the Citizens' Assembly on Electoral Reform in Ontario, Canada, also recommended the use of MMP in future elections to the Legislative Assembly of Ontario, with a ballot similar to New Zealand's, and with the closed province-wide lists used in New Zealand but with only 30% compensatory members. A binding referendum on the proposal, held in conjunction with the provincial election on 10 October 2007, saw it defeated.[citation needed]

In systems with a threshold, tactical voting for a minor party that is predicted to poll close to or slightly below the threshold is relatively common. Some voters may be afraid the minor party will poll below the threshold, and that that would weaken the larger political camp that the minor party belongs to. For example the German moderate-right Free Democratic Party (FDP) has often received votes from voters who preferred the larger Christian Democratic Union (CDU) party, because they feared that if the FDP received less than 5% of the votes, the CDU would have no parliamentary allies and would be unable to form a government on its own. The FDP and other smaller parties campaigned to lower the threshold to the 4% used in Sweden, Norway and Austria. This campaign might have succeeded but for the fear of resurgence of neo-Nazi parties. This tactical voting also ensures that votes are not wasted, but at the cost of giving the FDP more seats than CDU voters would ideally have preferred.

Similarly, in New Zealand, some voters who preferred a large party have voted for the minor party's local candidate to ensure it qualifies for seats (e.g. Epsom in 2008). In this case the tactic maintained proportionality by bypassing the 5% threshold.

In terms of tactical voting, the vote for the constituency representative is normally much less important than the party vote in determining the overall result of an election; but in some cases a party may be so certain of winning seats in the constituency elections that it expects no extra seats in the proportional top-up. Some voters may therefore seek to achieve double representation by voting tactically for another party in the regional vote, as a vote for their preferred party in the regional vote would be wasted. However this runs the risk of unintended consequences. Also, this tactic does not work in those German states which add "balance seats"; since those states maintain full proportionality even when a party wins too many constituency seats. This tactic is not prevalent in good MMP models with enough extra seats: in Germany and the German states, generally 50% of the seats are "list seats", in Scotland 43%, in New Zealand 42.5%. Where there is a ratio of less than 30%, the model may be considered "MMP-lite". In Albania where they were only 28.6% of the total, this was so low that the two main parties expected no extra seats, and both started voting for allied minor parties with their party votes. This became so severe that it totally distorted the working of the model. Rather than increase the number of "list seats" or allow additional "overhang" seats, Albania recently decided to change to a pure-list system.