This article deals with the short-term rental of cars. For the shared use of cars by persons with similar travel needs see Carpool. 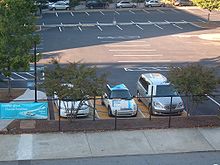 Car sharing or Carsharing (in the UK known as car clubs) is a model of car rental where people rent cars for short periods of time, often by the hour. They are attractive to customers who make only occasional use of a vehicle, as well as others who would like occasional access to a vehicle of a different type than they use day-to-day. The organization renting the cars may be a commercial business or the users may be organized as a democratically controlled company, public agency, cooperative, ad hoc grouping. Today there are more than one thousand cities in the world where people can carshare.[1]

The term "carsharing" is also used for carpooling or ride sharing in some places. 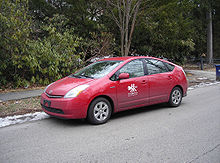 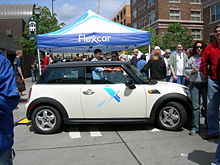 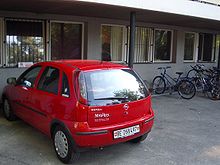 Despite its evident English language origins, the term carsharing (earlier often written as two separate words, and still today occasionally hyphenated) is now the widely accepted international term. Synonyms include autodelen in Dutch, autopartage in French, bildeling in Danish, automobile condivisa in Italian and bilpool in Swedish. In the United Kingdom the term "car clubs" is used, while "car sharing" is also used to refer to ride sharing.

The principle of carsharing is simple: individuals gain the benefits of private cars without the costs and responsibilities of ownership.[2] Instead of owning one or more vehicles, a household accesses a fleet of vehicles on an as-needed basis. Carsharing may be thought of as organized short-term car rental. [3]

"Carpooling" or "ride-sharing" refers to the shared use of a car for a specific journey, in particular for commuting to work, often by people who each have a car but travel together to save costs. However, there is a slight terminological hitch in the UK where the term car sharing (two words in this usage) is used for what in the U.S. is called "ride sharing". Carsharing in the sense discussed in this article is a recent development in Britain, and while such plans are still known more known as car clubs (a term which, in the U.S., refers strictly to a club of car hobbyists) the international term carsharing is gradually gaining currency there as well.

As is often the case with innovations that spring up more or less spontaneously in different parts of the world, operations are organized in many different ways in different places, according to the objectives of the organizers and users. A small informal start-up may have only one shared car, and only a handful of sharers. Larger services tend to focus on urban areas where there are many potential customers.

Carsharing differs from traditional car rentals in the following ways:

Some carshare operations (CSOs) cooperate with local car rental firms to offer best value to their customers (in particular in situations where classic rental may be the cheaper option.)

An increasing body of empirical evidence indicates that carsharing can provide numerous transportation, land use, environmental, and social benefits. [4] Neighborhood carsharing is often promoted as an alternative to owning a car where public transit, walking, and cycling can be used most of the time and a car is only necessary for out-of-town trips, moving large items, or special occasions. It can also be an alternative to owning multiple cars for households with more than one driver. A long-term study of City CarShare members by Robert Cervero, Professor of City and Regional Planning at the University of California, Berkeley, found that 30 percent of households that joined sold a car; others delayed purchasing one. Transit use, bicycling, and walking also increased among members.[5] A study of driving behavior of members from major carsharing organizations found an average decline in 27% of annual VKT.[6]

Car sharing is generally not cost-effective for commuting to a full-time job on a regular basis. Most carsharing advocates, operators and cooperating public agencies believe that those who do not drive daily or who drive less than 10,000 kilometers (about 6,200 statute miles) annually may find carsharing to be more cost-effective than car ownership.[7] But variations of 50% on this figure are reported by operators and others depending on local context.[citation needed] If occasional use of a shared vehicle costs significantly less than car ownership, this makes automobile use more accessible to low-income households.

Car sharing can also help reduce congestion and pollution. Replacing private automobiles with shared ones directly reduces demand for parking spaces. The fact that only a certain number of cars can be in use at any one time may reduce traffic congestion at peak times. Even more important for congestion, the strong metering of costs provides a cost incentive to drive less. With owned automobiles many expenses are sunk costs and thus independent of how much the car is driven (such as original purchase, insurance, registration and some maintenance).[8]

Successful carsharing development has tended to be associated mainly with densely populated areas such as city centers and more recently university and other campuses. There are some programs (mostly in Europe) for providing services in lower density and rural areas.[citation needed] Low-density areas are considered more difficult to serve with car sharing because of the lack of alternative modes of transportation and the potentially larger distance that users must travel to reach the cars.

People who have joined car sharing sell either their primary, secondary, or another off-hand car, after using the service. This reduces the cost of transportation per month by an average of $135 – $435, based on University of Berkeley's Research in 2008.[9]

The technology of CSOs varies enormously, from simple manual systems using key boxes and log books to increasingly complex computer-based systems (e.g. partially automated and fully automated systems) with supporting software packages that handle a growing array of back office functions.[10] The simplest CSOs have only one or two pick-up points, but more advanced systems allow cars to be picked up and dropped off at any available public parking space within a designated operating area.

While differing markedly in their objectives, size, business models, levels of ambition, technology and target markets, these programs do share many features. The more established operations usually require a check of past driving records and a monthly or annual fee in order to become a member. The cost and maximum time a car may be used also varies.

There is a higher chance of availability the earlier the reservation is. If a reservation is cancelled however, one may still be charged.

Once the reservations are completed and confirmed, the car will then be delivered at the time and place scheduled. There will be a small card reader mounted on the windshield. Once the customer places their membership card on the reader, it will use what is called blink technology to activate the time and unlock the car. The reader will not work until it is time for that specific reservation. The keys can then be found somewhere inside the car such as the glove compartment. Depending on the company, the customer may be provided with a key to a lock box that contains the ignition key itself. Once the customer is set, they are off to their next destination.[11]

Although members are often responsible for cleaning the car and filling up the tank when low, the car sharing company is generally responsible for the long-term maintenance of the vehicles. Members have to make sure that when they are finished, the car is ready for the next user to move on.[12][13] 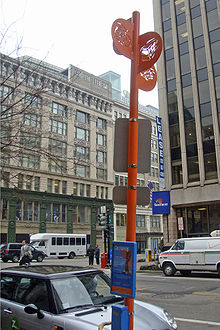 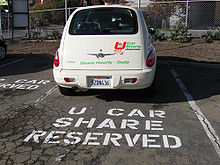 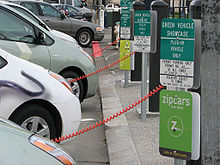 The first reference to carsharing in print identifies the Selbstfahrergenossenschaft carshare program in a housing cooperative that got underway in Zürich in 1948,[14] [15] but there was no known formal development of the concept in the next few years. By the 1960s as innovators, industrialists, cities, and public authorities studied the possibility of high-technology transportation—mainly computer-based small vehicle systems (almost all of them on separate guideways)—it was possible to spot some early precursors to present-day service ideas and control technologies.

The early 1970s saw the first whole-system carshare projects. The ProcoTip system in France lasted only about two years. A much more ambitious project called the Witkar was launched in Amsterdam by the founders of the 1968 white bicycles project. A sophisticated project based on small electric vehicles, electronic controls for reservations and return, and plans for a large number of stations covering the entire city, the project endured into the mid-1980s before finally being abandoned.

The 1980s and first half of the 1990s was a "coming of age" period for carsharing, with continued slow growth, mainly of smaller non-profit systems, many in Switzerland and Germany, but also on a smaller scale in Sweden, the Netherlands, Canada and the United States.[16] The real watershed in the development of the sector came in the 1990s with such larger and more structured projects as

Several car rental companies launched their own car sharing services beginning in 2008, including Hertz on Demand (formerly known as Connect by Hertz[28]), operating in the U.S. and Europe; WeCar by Enterprise Rent-A-Car; and U Car Share owned by U-Haul.[25]

In 2010 a new approach to carsharing began to be implemented, based on a peer-to-peer model. Examples of peer-to-peer car rental include

Adapting carsharing vehicles to persons with physical disabilities presents special challenges not faced by traditional car rental. With car sharing no mechanic is present to install or adjust adaptive equipment, and that equipment is left unattended after each use. In 2008 City CarShare introduced the first wheelchair carrying car share vehicle, the Access Mobile, specifically designed as a fleet vehicle shared with, not segregated from, non-wheelchair users.

Car sharing operators are increasingly opting to brand parts of their fleets with third-party advertising in order to increase revenue and improve competitiveness. Transit media, as this out-of-home advertising medium is referred to, is a strategy currently (or soon to be) employed by larger car sharing operators such, Canada's AutoShare and the UK's City Car Club, as well as smaller operators such as Australia's Charter Drive Car Share.

For future applications, many car sharing companies are now investing in plug-in hybrid electric vehicles (PHEV). With the use of these types of vehicles, cost of gas consumption can be greatly reduced. Since most customers do not need the vehicle for long amounts of time or distance, it gives the car sharing company time to collect and recharge these vehicles for additional use. This application can greatly reduce carbon emissions and improve city environments.[34]

Also, car sharing can be considered as an example of a technological change in consumption, which is a ‘process of mutual adjustment between innovation and its socio-economic environment.’ This type of innovation poses much potential due to the current state of technological change based on today’s passenger transportation capabilities.[35]

Other countries are already moving into designing concept cars that is solely based as an urban public vehicle. The Phiaro P70t Conch, Japan’s new concept vehicle, is a completely battery powered, three-seater vehicle which was designed for the purpose of car sharing. The vehicle was made to be small and compact enough to be driven around urban environments without sacrificing parking.[36] The promotion of these kinds of concept vehicles have caught the attention of automotive companies worldwide.