Antisemitism in the Soviet Union

Antisemitism in the Soviet Union

The Russian Revolution overthrew a centuries-old regime of official antisemitism. The Soviet Union's success, during its existence, in struggling with this legacy, and the degree to which its government fought against, or was itself guilty of antisemitism, is a topic of some debate. Antisemitism was commonly used as an instrument for personal conflicts in Soviet Russia, starting from conflict between Joseph Stalin and Leon Trotsky and continuing through numerous conspiracy theories spread by official propaganda. Antisemitism in the USSR reached new heights after 1948 during the campaign against the "rootless cosmopolitan" (euphemism for "Jew") in which numerous Yiddish-writing poets, writers, painters and sculptors were killed or arrested.[1][2] This culminated in the so-called Doctors' Plot.

Further information: History of the Jews in Russia

The Bolsheviks opposed anti-semitism which had been prevalent in Russia prior to the Russian Revolution. Under the Czars, Jews had been confined to a Pale of Settlement, were subject to many discriminatory laws, and had often been the victims of pogroms, many of which were organized by the Tsarist authorities or with their tacit approval[citation needed].

As a result of being the victims of oppression, many Jews either emigrated from the Russian Empire or joined radical parties such as the Jewish Bund or revolutionaries such as the Socialist-Revolutionary Party, the Mensheviks or the Bolsheviks.

The February Revolution and the Provisional Government

The Provisional Government cancelled all restrictions imposed on the Jews by the Tsarist regime, in a move parallel to the emancipation of the Jews in Western Europe that had taken place during the 19th century. At least formally, this stance was retained by the later Bolshevik governments.

While the Bolsheviks were opposed to religion, Christian as well as Jewish, they also opposed anti-Semitism and any form of discrimination against Jews. In August 1919 Jewish properties, including synagogues, were seized and many Jewish communities were dissolved. The anti-religious laws against all expressions of religion and religious education were being taken out on the Jewish population, just like on other religious groups. Many Rabbis and other religious officials were forced to resign from their posts under the threat of violent persecution. This type of persecution continued on into the 1920s.[3]

In March 1919, Lenin delivered a speech "On Anti-Jewish Pogroms"[4] in a gramophone recording. Lenin sought to explain the phenomenon of antisemitism in Marxist terms. According to Lenin, antisemitism was an "attempt to divert the hatred of the workers and peasants from the exploiters toward the Jews." Linking antisemitism to class struggle, he argued that it was merely a political technique used by the tsar to exploit religious fanaticism, popularize the despotic, unpopular regime, and divert popular anger toward a scapegoat. The Soviet Union also officially maintained this Marxist-Leninist interpretation under Stalin, who expounded Lenin's critique of antisemitism. However, this did not prevent the widely publicized repressions of Jewish intellectuals during 1948–1953 when Stalin increasingly associated Jews with "cosmopolitanism" and pro-Americanism.

Antisemitic pogroms were perpetrated by the White Army during the Russian Civil War. Lenin and the Bolshevik Party strongly condemned the pogroms, including official denunciations in 1918 by the Council of People's Commissars. Opposition to the pogroms and to manifestations of Russian antisemitism in this era were complicated by both the official Bolshevik policy of assimilationism towards all national and religious minorities, and concerns about overemphasizing Jewish concerns for fear of exacerbating popular antisemitism, as the White forces were openly identifying the Bolshevik regime with Jews.[5][6][7]

According to Jewish historian Zvi Gitelman: "Never before in Russian history — and never subsequently has a government made such an effort to uproot and stamp out antisemitism".[9]

Further information: Allegations of antisemitism on the part of Joseph Stalin 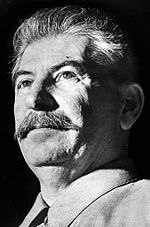 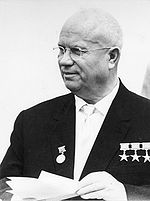 After Stalin's death, Soviet premier Nikita Khrushchev criticized Stalin and initiated De-Stalinization. But he did not view Stalin's anti-Jewish policies as "monstrous acts" or "rude violations of the basic Leninist principles of the nationality policy of the Soviet state."

Joseph Stalin emerged as leader of the Soviet Union following a power struggle with Leon Trotsky following the death of Lenin. Stalin has been accused of resorting to anti-Semitism in some of his arguments against Trotsky who was Jewish. Those who knew Stalin, such as Khrushchev, suggest that Stalin had long harbored negative sentiments toward Jews that had manifested themselves before the 1917 Revolution[10] As early as 1907, Stalin wrote a letter differentiating between a "Jewish faction" and a "true Russian faction" in Bolshevism.[10][11] Stalin's secretary Boris Bazhanov stated that Stalin made crude anti-Semitic outbursts even before Lenin's death.[10][12] It's also possible that Stalin's attitudes towards Trotsky, a Russian Jew, may have influenced his views of Jews in general. Stalin adopted antisemitic policies which were reinforced with his anti-Westernism.[13][note 1] Since antisemitism was associated with the Nazi Germany and was officially condemned by the Soviet system, the Soviet Union and other communist states used the cover-term "anti-Zionism" for their antisemitic policies. Antisemitism, as historian, Orientalist and anthropologist Raphael Patai and geneticist Jennifer Patai Wing put it in their book The Myth of the Jewish Race, was "couched in the language of opposition to Zionism".[2]

According to literary historian Konstantin Polivanov Stalin's own philosophical development in the direction of Russian Imperial idea and anti-Semitism that paved the way to the repressions of 1930's that largely purged Jews from the Soviet government was influenced by the anti-Semitic writings by the anti-revolutionary and anti-Marxist Russian philosopher Alexei Losev. Losev was incarcerated in the 1920s, but was suddenly released in 1930 and allowed to resume his academic career.[14]

Antisemitism in the Soviet Union commenced openly as a campaign against the "rootless cosmopolitan"[2] (euphemism for "Jew"). In his speech titled "On Several Reasons for the Lag in Soviet Dramaturgy" at a plenary session of the board of the Soviet Writers' Union in December 1948, Alexander Fadeyev equated the cosmopolitans with the Jews.[13][note 2] In this campaign against the "rootless cosmopolitan", many leading Jewish writers and artists were killed.[2] Terms like "rootless cosmopolitans", "bourgeois cosmopolitans", and "individuals devoid of nation or tribe" (all of which were codewords for Jews) appeared in newspapers.[13][note 3] The Soviet press accused the Jews of "groveling before the West," helping "American imperialism," "slavish imitation of bourgeois culture" and "bourgeois aestheticism."[13][note 4] Jews in the USSR were denied of their victimization at the hands of the Nazis, Jewish scholars were removed from the sciences and emigration rights were denied to Jews.[15] The Stalinist antisemitic campaign ultimately culminated in the Doctors' plot in 1953. According to Patai and Patai, the Doctors' plot was "clearly aimed at the total liquidation of Jewish cultural life."[2] Communist antisemitism under Stalin shared a common characteristic with Nazi and fascist antisemitism in its belief in "Jewish world conspiracy".[16]

After Stalin's death, the antisemitic Stalinist terror relented, but the fundamentals of Stalin's polices towards the Jews remained unchanged in the post-Stalinist USSR; only the methods changed — indirect anti-Jewish policies over direct physical assault.[17] Daniel Goldhagen suggests that despite being famously critical of Stalin, Nikita Khrushchev did not view Stalin's anti-Jewish policies as "monstrous acts" or "rude violations of the basic Leninist principles of the nationality policy of the Soviet state."[18]