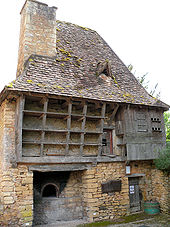 The four banal (English: common oven) was a common municipal institution in medieval France. Generally ovens were owned by the feudal lord of the municipality and operated by an ovenmaster or fournier; personal ovens were generally outlawed, requiring users of the communal oven to pay a fee to the fournier to cook their food. Such ovens were masonry ovens built on the Roman plan, and were large enough to hold an entire community's ration of bread. In the hamlet of Nan-sous-Thil (Côte-d'Or, France) [1] the inhabitants were required to bake their bread at the four banal, as at home they were permitted only a petit four that fit under the hood of the chimneypiece, large enough only to bake "gâteau et flan". The dangers of a communal fire, where thatched cottages huddled together, the reason for the proscription, were not in vain: in 1848 a full quarter of the hamlet of Nan-sous-Thil was consumed by a fire that began from sparks when a housewife heated her oven.

The oven design, but not the feudal monopoly on oven operation, was carried to French colonies, particularly Quebec. The four banal system seems to have died out in France during the 18th century, though it was a time when some dormant seigneurial rights were being insisted upon by an aristocracy hard-pressed for cash, as an official mémoire suggests:

The seigneur will do well not to raise the question for consideration, for the difference of the times, seeing the scarcity of wood and the poverty of the inhabitants, whom the exercise of this right would greatly distress. If it is by negligeance of the seigneur that this right has fallen into desuetude, let the inhabitants profit from it in peace".[2]

Traditions surrounding the four banal may have lasted as late as World War II. In some rural areas of France, the old communal ovens are still extant (illustration) and are sometimes used for community celebrations.