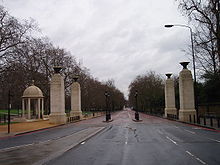 The Memorial Gates are a war memorial located at the Hyde Park Corner end of Constitution Hill in London, UK. Also known as the Commonwealth Memorial Gates, they commemorate the armed forces of the British Empire from five regions of the Indian subcontinent (India, Pakistan, Bangladesh, Nepal, Sri Lanka), as well as Africa and the Caribbean, who served in the First World War and the Second World War. The memorial was inaugurated in 2002.

In memory of the five million volunteers from the Indian sub-continent, Africa and the Caribbean who fought with Britain in the two World Wars.

A shorter inscription quotes the words of the Nigerian author and poet Ben Okri:

Also on the Green Park side of the Gates there are two stone slabs, either side of the pavilion, commemorating by name several of the campaigns in which forces from the British Empire fought.

The plans for the memorial were made by the Memorial Gates Trust. As inscribed on the memorial, the inaugural patron of the Trust was Charles, Prince of Wales, and the inaugural trustees were: the Baroness Flather (chair), Khalid Aziz, the Lord Inge, Lakshmi Niwas Mittal, Harpinder Singh Narula, Sir Gulam Noon, Sir Anwar Pervez, the Lord Sandberg, the Viscount Slim, Sir Neil Thorne, and the Lord Weatherill. The architect was Liam O'Connor. Funding was from the National Lottery, provided by the Millennium Commission. Construction of the Memorial Gates began on 1 August 2001, with an inscription commemorating this event on the first stone to be laid - the inscription states that the stone was laid by the Queen Mother. The company contracted to build the memorial was Geoffrey Osborne Ltd, while the stonemasons were CWO Ltd. The Memorial Gates were inaugurated on 6 November 2002 by Queen Elizabeth II with an inscription stating that this took place in the Golden Jubilee year of her reign.