The common toad (Bufo bufo) or European toad is an amphibian widespread throughout Europe, with the exception of Iceland, Ireland and some Mediterranean islands. Its easterly range extends to Irkutsk in Siberia and its southerly range includes parts of northwestern Africa in the northern mountains of Morocco, Algeria, and Tunisia. 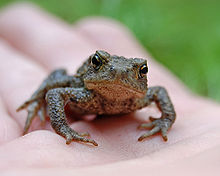 Adults males usually grow to 8 cm and adult females around 13 cm and their skin has a warty appearance and ranges from green to brown. They weigh about 20 to 80 grams.

Toads generally hunt at night, and are most active in wet weather. As a defense against predators they secrete a toxic, foul tasting substance called bufagin. This is enough to deter many predators although grass snakes and hedgehogs are immune. Although the adults spend most of their time on land the females enter ponds and other still waters to lay their eggs, toadspawn, which can be distinguished from the spawn of the common frog as it forms strings rather than a large mass of eggs. Eggs are laid in the spring, with the females attempting to return to the water in which they were born. The young tadpoles resemble other tadpoles in their appearance except that toadpoles have a larger, rounder blacker head and shorter tail.

Young common toads eat ants and some small flies. Adult common toads eat invertebrates such as insects, insect larvae, spiders, slugs and worms, which they catch on their sticky tongues. Larger toads may also take small reptiles and rodents, which are swallowed alive.