Helix is a genus of large air-breathing land snails, terrestrial pulmonate gastropod molluscs. This genus is native to Europe and the regions around the Mediterranean Sea. Helix is the type genus of the family Helicidae.

The best-known species include Helix aspersa, the common, or brown garden snail, and Helix pomatia, the Roman snail, Burgundy snail, or edible snail. H. pomatia and some other species are eaten as escargots.

Helix snails have been introduced throughout the world, where some, especially H. aspersa, have become garden pests.

The genus Helix is known from the Oligocene on.[2]

Snails in this genus create and use love darts during mating.

Subgenera and species within the genus Helix include today:

Some taxonomists remove the species "Helix aperta", "Helix aspersa", and "Helix mazzullii" from the genus Helix and place them in their own monotypic genera as Cantareus apertus, Cornu aspersum[8] and Cantareus mazzullii.

At the beginning in the mid-1700s the generic name Helix had been used for almost all terrestrial gastropods, later this was restricted to species with helicoid habitus, including zonitids and other groups. In the course of the 1800s more groups were removed, but prior to 1900 several thousand helicid and hygromiid species of Europe and abroad had still been classified in the genus Helix.[9][10] It was only in the early 1900s that the genus was split up into many separate genera, leaving only some 30 species closely related to its type species Helix pomatia in the genus Helix. 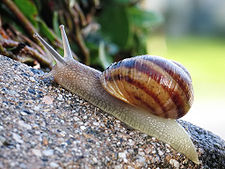 In addition to the hard calcareous shell that covers and protects the internal organs, the head and foot region can be observed when the snails are fully extended. When they are active, the organs such as the lung, heart, kidney and intestines remain inside the shell; only the head and foot emerge.

The head of the snail has two pairs of tentacles: the upper and larger pair contain the eyes, and the lower pair are used to feel the ground in front. The mouth is located just underneath the head. The tentacles can be withdrawn or extended depending on the situation. The mouth has a tongue called a "radula" that is composed of many fine chitinous teeth. This serves for rasping and cutting food.

From April through the northern summer, the number of snails copulating increases due to the higher temperature and humidity, which enhance the possibility of oviposition. The pulmonate snails are hermaphroditic, meaning that both female and male sexual organs are present in the same individual. The snails produce both eggs and sperm in the ovotestis (also called the hermaphrodite gland), but it is later separated into two divisions, a sperm duct and oviduct, respectively.

Mating takes several hours, sometimes a day. H. aspersa snails stab a calcite spine, known as a "love dart", at their partner. The love dart is coated with a mucus that contains a chemical that enables more than twice as many sperm to survive inside the recipient. A few days after mating, the eggs are laid in the soil. The eggs are usually 4–6 mm in diameter.

After snails hatch from the egg, they mature in one or more years, depending on where the organism lives. Maturity takes two years in Southern California, while it takes only ten months in South Africa.

The size of the adult snails slightly varies with species. H. aspersa grows up to 35 mm in height and width, whereas H. pomatia grows up to 45 mm. The life span of snails in the wild is on average two or three years.

Some snails may live longer, perhaps even 30 years or older in the case of the Roman snail[11] but most live less than 8 years. Many deaths are due to predators and parasites.

The garden snail is a relatively fast snail. It has been observed to reach speeds of up to 1.3 cm/s.[12] 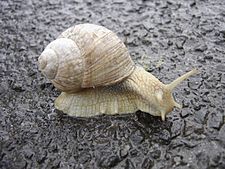 Since snails in the genus Helix are terrestrial rather than fresh-water or marine, they have developed a simple lung for respiration. (Most other snails and gastropods have gills,instead.)

Oxygen is carried by the blood pigment hemocyanin. Both oxygen and carbon dioxide diffuse in and out of blood through the capillaries. A muscular valve regulates the process of opening and closing the entrance of the lung. When the valve opens, the air can either leave or come into the lung. The valve plays an important role in reducing water loss and preventing drowning.

Helix snails prefer cool, damp environments, as they easily suffer moisture loss. Snails are most active at night and after rainfall. During unfavourable conditions, a snail will remain inside its shell, usually under rocks or other hiding places, to avoid being discovered by predators. In dry climates snails will naturally congregate near water sources, including artificial sources such as waste-water outlets of air conditioners.

The common garden snail (Helix aspersa) is herbivorous. These snails are able to digest most vegetation including carrots and lettuce. They also have a specialized crop of symbiotic bacteria that aid in their digestion, especially with the breakdown of the polysaccharide cellulose into simple sugars.

Many predators, both specialist and generalist, feed on snails. Some animals, such as the song thrush, break the shell of the snail by hammering it against a hard object, such as stone, in order to expose its edible insides. Other predators, such as some species of frogs, circumvent the need to break snail shells by simply swallowing the snail whole, shell and all.

Some carnivorous species of snails, such as the decollate snail and the rosy wolf snail, also prey on Helix snails. Such carnivorous snails are commercially grown and sold in order to combat pest snail species. Many of these also escape into the wild, where they prey on indigenous snails, such as the Cuban land snails of the genus Polymita, and the indigenous snails of Hawaii.

H. pomatia and H. aspersa are the two edible species that are most used in European cuisine. Spanish cuisine also uses Otala punctata, Theba pisana and Iberus gualterianus alonensis, amongst others. The process of snail farming is called heliciculture.

Escargots are often served in a traditional way as appetizers. They may also be used as ingredients in other recipes.

Snails contain many nutrients. They are rich in calcium and also contain vitamin B1 and E. They contain various essential amino acids, and are low in calories and fat.