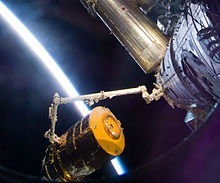 HTV being unberthed from active CBM

A CBM consists of two components: the active common berthing mechanism (ACBM) and the passive common berthing mechanism (PCBM).[1] Once connected, the two sides of the CBM form a pressure tight seal. The CBM also features a hatch, which can be opened to reveal a 50 inch (127 cm) diameter passage for crew/cargo transfer. Since this passage is large enough to allow International Standard Payload Racks to fit, payloads can be pre-configured in racks and transported to the station aboard the Multi-Purpose Logistics Modules, which use CBM ports. Once the hatches have been opened, electrical, data, and fluid lines can be manually connected through the CBM vestibule by the crew.

The CBM is to be used as a berthing mechanism for the unmanned Japanese H-II Transfer Vehicle (HTV). Future support spacecraft such as the Cygnus resupply vehicle, and the SpaceX Dragon capsule are also designed to connect using a CBM. These spacecraft will feature a PCBM, and will be berthed to one of the station's open ACBMs using the station's robot arm.[2]

Each CBM compatible module that connects to previously launched modules requires a PCBM to connect to an ACBM.[1] The three ISS connecting nodes feature four radial ACBM ports. Unity features two ACBM on the axial side, while Harmony and Tranquility feature a PCBM on one axial side and an ACBM on the other axial side.[3][4] The Destiny' laboratory and the Japanese Pressurised Module both feature one PCBM and one ACBM.[5][6]