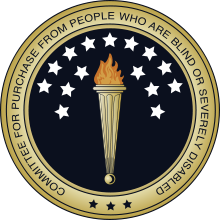 The Javits-Wagner-O'Day Act 41 U.S.C. § 46 et seq. is a U.S. federal law requiring that all federal agencies purchase specified supplies and services from nonprofit agencies employing persons who are blind or have other significant disabilities. The Act was passed by the 92nd United States Congress in 1971; it is named after Senator Jacob K. Javits, who led efforts to expand the Wagner-O'Day Act of 1938, named after Senator Robert F. Wagner and Congresswoman Caroline O'Day.[1]

Senator Javits led the efforts to expand the older law, which applied only to blind persons, and covered supplies but not services. The effort succeeded in spite of objections raised by organizations representing the blind, as expressed for example in Resolution 68-04[2] passed in 1968 by the American Council of the Blind.

The federal agency charged with administering the program is currently known as the Committee for Purchase from People Who Are Blind or Severely Disabled. It replaced the Committee on Purchases of Blind Made Products established by the 1938 act. The agency decides which commodities and services the government should purchase under the Javits Wagner O'Day Act. The program it oversees, known for over three decades as the Javits Wagner O'Day Program, was renamed "AbilityOne" by Congress in 2006.[3] The Committee is composed of fifteen Presidentially-appointed members, eleven of whom represent governmental agencies (Department of Agriculture, Air Force, Army, Commerce, Defense, Education, Justice, United States Department of Labor, Navy and Veterans Affairs, and the General Services Administration). The remaining four members are private citizens knowledgeable about the employment problems of people who are blind or have other severe disabilities, including those employed by nonprofit agencies affiliated with the AbilityOne Program.[4]

Older logo, from the Javits-Wagner-O'Day Program

The Committee has designated two national nonprofit associations NPAs to assist with the program implementation and execution: the National Industries for the Blind (NIB) and NISH – Creating Employment Opportunities for People with Significant Disabilities. More than 600 NPAs associated with either NIB or NISH produce products and services under the AbilityOne Program. The core criteria for NPA eligibility is that 75% of total direct labor hours must be performed by people who are blind or have other significant disabilities.[citation needed]. The AbilityOne Program is the largest employment resource for people who are blind or have other significant disabilities, helping to employ more than 40,000 people.