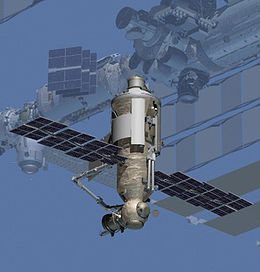 Nauka (Russian: Нау́ка; lit. Science), also known as the Multipurpose Laboratory Module (MLM), (Russian: Многофункциональный лабораторный модуль, or МЛМ), will be a component of the International Space Station (ISS), funded by the Russian Federal Space Agency. In the original ISS plans, Nauka was to use the location of the Docking and Stowage Module. Later, the DSM was moved to Zarya's nadir port and named Rassvet. Currently, Nauka is scheduled to dock at the Zvezda's nadir port, and replace Pirs. In earlier plans, the now-cancelled complex of the Universal Docking Module and the two Russian Research Modules were attached there; Nauka has replaced them.

In the 1990s, plans for the Russian segment of the ISS included several research modules that were intended to be adjunct to Zarya and Zvezda. However, the plans changed in the early 2000s. In August 2004, it was decided that Nauka would be built from the modified Khrunichev-built Functional Cargo Block (FGB-2), whose construction has been halted at 70-percent complete since the late 1990s. The FGB-2 was originally made as a backup for the original launch of the Zarya module (the first FGB), and as early as 1997 it was planned to be used as the Universal Docking Module (UDM).[1]

There was an alternate, rejected proposal for Nauka from RKK Energia, based on the cancelled Commercial Enterprise Module, which was jointly funded by RKK Energia and SPACEHAB.

Work on Nauka and launch date

At the end of 2005, the European Space Agency (ESA) agreed with the Russians that the European Robotic Arm would be launched together with Nauka, mated on its surface for a later deployment in space.

In 2004, the Russian Federal Space Agency stated that Nauka should be ready for launch in 2007 on a Russian Proton rocket. However, the Nauka project was delayed further, first to 2008 and later to 2009. A November 2006 ESA bulletin mentioned that the RSA was negotiating with the ISS partners to push back the prospective launch date to the end of 2008. As of March 2011, the Consolidated Launch Manifest shows that the module is now expected to launch in May 2012.[2]

Nauka will be used for experiments, docking and cargo. It will also serve as a crew work and rest area. Nauka will also be equipped with an attitude control system that can be used as a backup by the ISS. It will be docked onto the Zvezda module's nadir docking port. Outfitting equipment launched in 2010 with the Rassvet (Mini-Research Module 1) on NASA's STS-132 will also be used for Nauka, including internal hardware and an experimental airlock to be positioned on one of the side-facing ports at the bottom of the module. A spare elbow joint for the European Robotic Arm was also launched.

Nauka will be Russia's primary ISS research module. For some time, NASA's official plans included a second research module around the same size as Nauka, listed to be "under review", but it was eventually cancelled, leaving Nauka to be the only Russian research module besides Rassvet and Poisk (Mini-Research Module 2).

It has been proposed that Nauka include a small free-flying capsule that can be detached from the station for experiments outside of the ISS's microgravity environment.[citation needed]

‹ The template below (Future spaceflights) is being considered for deletion. See templates for discussion to help reach a consensus.›
Categories: