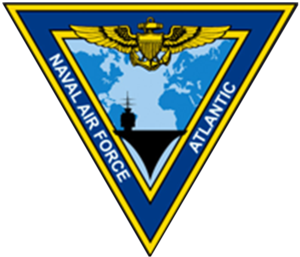 Commander, Naval Air Force, U.S. Atlantic Fleet (aka COMNAVAIRLANT, AIRLANT, CNAL) is the aviation Type Commander (TYCOM) for the United States Atlantic Fleet naval aviation units. Type Commanders are in administrative control (ADCON), and in some cases operational control (OPCON) of certain types of assets (ships, submarines, aircraft, and fleet marines) assigned to the Pacific and Atlantic Fleets. AIRLANT is responsible for the material readiness, administration, training, and inspection of units/squadrons under their command, and for providing operationally ready air squadrons and aircraft carriers to the fleet.

COMNAVAIRLANT is headquartered at NAS Norfolk. The staff is made up of approximately 515 officer, enlisted, civilian and contractor personnel.

"Support COMLANTFLT and other commanders by providing combat ready/sustainable naval air forces, trained and equipped in an environment which emphasizes safety, interoperability and efficient resource management."

On 30 July 1957, the command added "Naval" to its title. In October 2001, the Chief of Naval Operations placed Type Commanders in a "Lead-Follow" arrangement. Under this arrangement, COMNAVAIRPAC (AIRLANT's west coast counterpart) became TYCOM for all Naval Aviation, and assumed the additional title of Commander, Naval Air Forces (COMNAVAIRFOR). At that time, command of AIRLANT went from a 3-star/Vice Admiral to a 2-star Rear Admiral.

Naval Air Force, U.S. Atlantic Fleet is composed of more than 40,000 men and women who maintain and operate the aircraft carriers, aircraft squadrons and aircraft of the Atlantic Fleet. It provides combat-ready air forces to fleet commanders operating around the globe.

There are six Carrier Strike Group commanders who, although not under operational control of COMNAVAIRLANT, work very closely with the staff. CSG commanders are operationally responsible for the carrier, the embarked airwing and the cruisers that make up the battle group.

The nucleus of the naval battle group is the aircraft carrier. In the Atlantic Fleet, COMNAVAIRLANT has five carriers assigned to carry out the mission of COMLANTFLT and other commanders. One or two of these carriers are usually deployed with the U.S. Sixth Fleet in the Mediterranean Sea or with the U.S. Fifth Fleet in the Persian Gulf in support of U.S. Central Command. When not deployed or undergoing periodic maintenance/overhaul, or refresher training, these ships operate with U.S. Second Fleet in the Western Atlantic or U.S. Fourth Fleet in the Caribbean.

The carrier air wing commander is responsible for a number of squadrons whose missions include attack, fighter, patrol, reconnaissance, anti-submarine warfare, electronic warfare and logistic support.