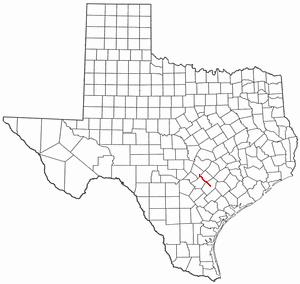 The San Marcos River rises from the , the location of , in . The springs are home to several threatened or endangered species, including the , , and . The river is a popular recreational area, and is frequented for tubing, , , and .

The river begins at San Marcos Springs, rising from the into Spring Lake. Access to much of the headwaters is restricted due to the delicate ecosystem and numerous rare species. The upper river flows through Texas State University and San Marcos, and is a popular recreational area. It is joined by the after four miles, passes through Luling and near Gonzales flows into the Guadalupe River after a total of 75 miles (121 km). This course is the first section of the .

The history and naming of the river is somewhat unclear. It may have been discovered by ’s expedition in 1689, but some scholars believe they instead had found the Colorado or Navidad rivers. The convention came to call the first sizeable river beyond the Guadalupe. However, at the time, the was often called the Guadalupe, and part of the Guadalupe often called San Ybón. In 1808, the Spanish established San Marcos de Neve, just south of present-day San Marcos. They had friendly relations with the indians, but the hostile tribe forced them to leave in 1812. In , the river was affected by severe flooding.

The San Marcos River Bridge near Gonzales was featured in .