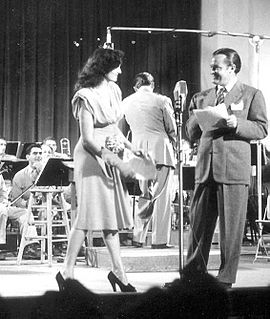 Command Performance is a radio program which originally aired between 1942 and 1949. The program was broadcast on the Armed Forces Radio Network (AFRS) with a direct shortwave transmission to the troops overseas. It was not broadcast over domestic U.S. radio stations.

Troops sent in requests for a particular performer or program to appear, and they also suggested unusual ideas for music and sketches on the program, such as Ann Miller tap dancing in military boots. Top performers of the day appeared, including Jack Benny, Frank Sinatra, Bob Hope, Fred Allen, Ginger Rogers, Judy Garland and The Andrew Sisters.

Dick Tracy in B Flat

The program generally ran for 30 minutes outside of holiday and other specials, continuing well after WWII for a total of more than 400 programs.

In 2009, the Pentagon Channel revived the show with some of today's newest acts.

The AFRS produced several similar radio music and variety programs during WWII including the following.