Comics from The Legend of Zelda series

Comics from The Legend of Zelda series

Comics adaptations of The Legend of Zelda series of video games, especially in Japan, have been published under license from Nintendo.

The Legend of Zelda is a series of comics published by Valiant Comics based on The Legend of Zelda series of video games. They expanded greatly on the land of Hyrule. The comics fit sometime during or after the second game, Zelda II: The Adventure of Link. Some of the characters from the TV series appear to have been modeled after those from this comic series. Link is given reddish hair and a large nose. The comics were released on a monthly basis starting in February 1990, and continuing until August of that same year. In 1993, there were two volumes released with five issues in each.[citation needed]

Viz Media is currently planning to publish English translations of Himekawa's Zelda manga in North America,[1] beginning with their adaptation of The Ocarina of Time, which was published on October 2008.[2]

Since July 2009, a French translation is being published by Soleil Manga. The first manga available was A Link to the Past followed by Ocarina of Time 1 & 2. Himekawa's other Zelda manga will be translated into French before Summer 2010.

Released in 1998, and the English version in 2008, it is an adaptation of The Legend of Zelda: Ocarina of Time. There are two story arcs in this manga: Child arc (こども編) and Adult arc (おとな編). The protagonist is Link and during the course of the book he is on a quest to stop Ganondorf (ガノンドロフ) from taking over Hyrule (ハイラル). Princess Zelda (ゼルダ姫) helps him in his quest. The book more-or-less follows the same plot as the game; however there are a few differences in plot from the game. There are six chapters in the first book, and nine in the second. Some of the added information in the manga is added to explain certain points; for example, in the manga pierced ears is a traditional rite of Sheikah passage, although this is not included in the game. The series was published in English by Viz Media in North America as Volumes 1 and 2, respectively.[3][4] 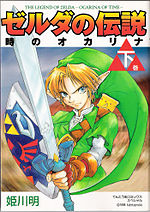 Released in 2000,and the English version in 2009, it is an adaptation of The Legend of Zelda: Majora's Mask, continuing from where the previous adaptation ended. It is one volume, and the last chapter includes the artist's speculation of where Majora's mask originated. The volume was published in English by Viz Media in North America as Volume 3.[5]

According to the manga, which is a different story than that of the game itself, the mask itself was an ancient and dangerous artifact made from the armor of a legendary and evil beast named Majora that was danced to dying exhaustion by a being disguised as a human traveler. According to a legend devised "by the humans themselves", any who obtain the beast's armour gains hold of a great and terrible power. All who approached it, warriors, men and women alike, even with good intentions, were devoured without remorse. The early Terminian tribes used the mask in their cursed hexing rituals, but when the evils caused by the mask became too much to bear, they sealed it away in darkness forever... so they hoped.

As the mask of the devil, Majora's Mask gained its power from the evil desires that people had in their minds as they were devoured by the beast, or when they cast the hexes when the armor was made into the mask. As it passed from member to member in the tribe it accumulated its power until it was too much to control. The tribe died out, but the mask still rested in darkness. The Happy Mask Salesman went to great lengths to get it, but while travelling in the Lost Woods it was stolen by Skull Kid and his fairies, Tatl and Tael (a reference to the phrase, tattle tail). When the Skull Kid wore it the evil essence trapped within possessed him, beckoning him to Termina, and making him cause harm amongst the townspeople, most notably interfering with the engagement of Anju to Kafei. The most serious problem caused by the mask was that the moon was torn out of its orbit, and was on a collision course with Termina's capital city. The moon would have exterminated all life in a cataclysm of fire had it not been for Link's intervention. With the power of the Fierce Deity's Mask, he defeated Majora's Mask and saved Termina. The moon was sent back into orbit after these events.

As stated above, while Skull Kid was possessed, he wronged many of the people in Termina. In addition, he sealed his former friends, the Four Guardians in the masks of evil deities and sealed them in the temples located in the four compass directions. Link had to free all of them in order to save Termina.

Oracle of Seasons and Oracle of Ages 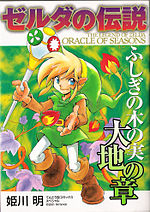 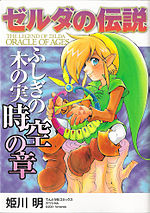 Based on The Legend of Zelda: Four Swords Adventures, it spans 2 volumes and 12 chapters. Included in volume two is an omake. The series is published in English by Viz Media in North America as Volumes 6 and 7, respectively.[8][9] 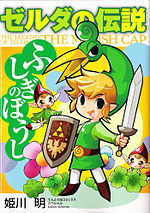 Written by Akira Himekawa and published in early 2006 in Japan, this manga chronicles the adventures of Link in the game of the same name, including a short omake featuring Ezlo and Vaati. Viz released an English adaptation of this manga as Volume 8 of their Zelda series on December 1, 2009.[10] 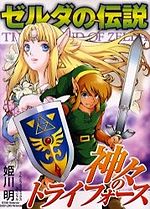 Triforce of the Gods cover

Triforce of the Gods

A manga adaptation of The Legend of Zelda: A Link to the Past following the release of the Game Boy Advance port. In its telling, Agahnim is revealed as a friend of Link's father. Agahnim took to magic and learned how to break the Seal of the Sages, being recruited to Ganon's services. When confronted by his friend, Agahnim sent him and his wife into the Dark World.

Viz released an English adaptation of this manga (renamed A Link to the Past to fit the game's North American counterpart) as Volume 9 of their Zelda series on February 2, 2010.[11] 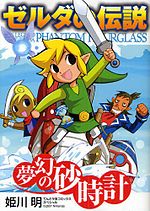 Originally released in Japan in early 2009, the latest and (currently) final chapter of Akira Himekawa's Zelda series is based on the DS adventure, The Legend of Zelda: Phantom Hourglass, the sequel to Wind Waker. Strangely, though the manga retains the game's characters and overall plot, many of the character's personalities and some events in the game were changed, sparking negative reactions from several fans of the original game. Despite this, however, it continues to receive positive reviews. Viz released an English adaptation of this manga as Volume 10 of their Zelda series on September 7, 2010.[12]

Triforce of the Gods

A Link to the Past by Shotaro Ishinomori

It was created as a serial comic for Nintendo Power magazine by the acclaimed manga author Shotaro Ishinomori, and later collected in graphic novel form, this told an alternate version of the events from A Link to the Past. Though Link starts out a hapless, bumbling kid, caught up in something bigger than he ever imagined, he displays great courage and ultimately proves himself a determined and competent adventurer. This telling portrays Link's parents as Knights of Hyrule, lost to the Dark World.

Five novels (published by Futabusha) and several Yonkoma manga (published by Shiseisha) based on aspects of The Legend of Zelda series have also been published.[15][16]

The Legend of Zelda: The Wind Waker – Link's Logbook