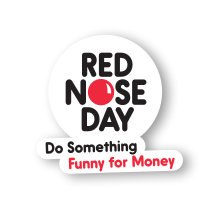 Red Nose Day 2011 was a fundraising event organised by Comic Relief. There was a live telethon broadcast on BBC One and BBC Two from the evening of 18 March 2011 to early the following morning as well as a number of run-up events. The theme for the Red Nose Day 2011 invited fund-raisers to "Do Something Funny For Money".

Donations to Comic Relief's Red Nose Day 2011 reached £74,360,207, the largest total reached on the night in the event's 23 year history. Comic Relief co-founder Richard Curtis said: "This is more than we ever believed we would raise. The generosity of the British public is staggering."[1]

The sum for the 13th Red Nose Day includes:

Red Nose Day typically raises many millions more than the amount raised on the night. Further donations will continue to be received, and the films shown will start to generate income themselves as many of the sketches are available for purchase and download from iTunes.

Helen Skelton traversed a 200 feet (61 m) high tight rope between two towers at Battersea Power Station. She became the first ever British woman to walk a tightrope this high.[3] During the Red Nose Day evening, it was announced Helen's traverse raised £253,789 for Comic Relief.[4]

Famous, Rich and in the Slums

Famous, Rich and in the Slums, a two-part documentary for Red Nose Day followed Lenny Henry, Samantha Womack, Angela Rippon and Reggie Yates as they were left alone for a week to live, work and survive in one of the most impoverished places on earth – the slums of Kibera, Kenya.

From midday to midday on 5–6 March, a marathon panel show, titled 24 Hour Panel People, was broadcast live over the official website. The event took in a succession of popular programmes, with David Walliams a constant presence for the whole 24 hours, taking on various roles. The full list of panel shows are listed below:[5]

Room 101, with Nick Hancock returning as host after 14 years, was originally supposed to have come between They Think It's All Over and Call My Bluff, but was axed after the show ran behind. Paul Merton was advertised to reprise his role as regular team captain on Have I Got News For You but due to illness was replaced by Clive Anderson. Jason Manford was advertised to host Have I Got News For You, but for unknown reasons did not appear at all and was replaced by Patrick Kielty.

On Friday 25 March 2011 a one hour long highlight's show of the marathon was broadcast on BBC One. The highlights show included clips of selected games: Would I Lie to You, Just a Minute, The Generation Game, Through the Keyhole, Blankety Blank, QI, Whose Line Is It Anyway? and Never Mind the Buzzcocks, some backstage film, and two of the Comic Relief appeal films - Ruth Jones on senile dementia home respite, and David Tennant in a Ugandan hospital.[6]

Just prior to the final total, DJ Fearne Cotton promised to spend the last twenty minutes of the 52 hour marathon in a swimsuit if the final total was £2,000,000 or more. As this goal had been reached, Fearne wore a black and white striped swimming costume. The amount of users trying to view the studio webcam caused the Radio 1 website to crash.[10] The station's Twitter feed jokingly acknowledged the issue, and reminded listeners that the Red Button feed was still running.[11] In the evening on 18 March 2011, the total amount raised by Chris and Dave was £2,622,421.[12] With a final total of £2,821,831.

On 23 March 2011, it was confirmed that an average of 2.84 million people watched the broadcast via the Red Button Interactive Service for an average of 144 minutes each.[13]

On 14 March on BBC One, CBBC created a show for the charity called Comic Relief does Glee Club which lets a group perform music in three varieties (choir, musical theatre and contemporary). The Grand Final and Comic Relief does Glee Club 2011 trophy was won by top choir Soul Mates, fifteen children from south-east and east London who go to Step Up Music Theatre School.

A series of Let's Dance for Comic Relief was broadcast between 19 February and 12 March. It was won by Charlie Baker and James Thornton.

Lord Prescott is going to read the Shipping Forecast on BBC Radio 4 to raise money for Comic Relief on Saturday 19 March 2011 at approximately 0:48. Comic duo Ant & Dec's Big Red Nose Broadcast aired on 14 March 2011. They appeared on various television shows and radio broadcasts to raise money for this years appeal, and took items to be auctioned off for charity.

The Wanted released the official comic relief 2011 single "Gold Forever" on 13 March. Other Comic Relief singles include George Michael's cover of the 1987 song "True Faith" by New Order and the Take That song "Happy Now" featuring Take That and Fake That consisting of David Walliams, James Corden, John Bishop, Alan Carr and Catherine Tate.[15] Also Geraldine McQueen & Susan Boyle "I Know Him So Well"; the song has been expanded to overseas sales which will likely increase the output to Comic Relief.

More than a hundred celebrities are to be involved in "Twit Relief", an event on Twitter.[16]

At the beginning of the show Claudia Winkleman and Michael McIntyre mentioned that although Comic Relief were not currently aiding victims of the 2011 Tōhoku earthquake and tsunami, they were monitoring the situation. Davina McCall and Graham Norton revealed in their section of the show that due to the current events, the previously scheduled 10.30pm BBC News would air in its normal slot of 10.00pm and that as planned tonights show would continue on BBC Two between 10.00pm and 10.35pm, unlike the previously scheduled 10.30pm - 11.05pm slot.

Peter Dickson was present throughout the first part of the show, narrating and featuring in Dermot O'Leary's introduction.
Lenny Henry appeared throughout the evening, introducing multiple links and presenter changeovers.
Times approximate:

Tonights compilation hosted by Jack Whitehall and Kevin Bridges features clips from The Morgana Show, The One Ronnie, Miranda, The Inbetweeners, Newswipe Misery Bear and Armstrong and Miller, plus a special sketch from Peter Dickson. The audience included Marcus Akin.