One Detroit Center, also known as Comerica Tower at Detroit Center after its tenant, is a skyscraper and class-A office building located downtown which overlooks the Detroit Financial District. Rising 619 feet (189 m), the 43-story tower is the tallest office building in Michigan, and the second tallest overall in the state behind the central hotel tower of the Renaissance Center, located a few blocks away. Although the Penobscot Building has more floors (45 above-ground floors compared to 43), One Detroit Center's floors are taller, with its roof sitting roughly 60 feet (18 m) taller than Penobscot's. Its floor area is 1,674,708 square feet (155,585 m2).[4]

In December 2009, Comerica announced it would vacate the Comerica Tower by 2012, consolidating its Michigan operations at 411 West Lafayette Boulevard after having moved its corporated headquarters to Dallas in 2007. The move will put the naming rights for One Detroit Center into play. [5] 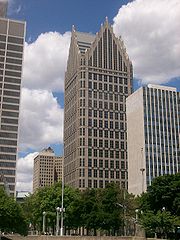 One Detroit Center from Jefferson Avenue.

The building was designed by noted architects John Burgee & Philip Johnson, partners influential in postmodern architecture.[6] One Detroit Center was constructed from 1991 to 1993. It houses numerous other tenants, including many prominent Detroit law firms, and other banks. Some, however, have expressed concern over the building's lack of exterior lighting at night, in contrast to the easily identifiable orb of the nearby Penobscot Building. In addition to retail, the building also contains a restaurant.

The building is famous for its postmodern architectural design topped with Flemish-inspired neo-gothic spires which blend architecturally with the city's historic skyline.[6] It is constructed mainly of granite. Sometimes called a "twin gothic structure", for its pairs of spires, it is oriented North-South and East-West (as named on a plaque along the Windsor waterfront park). One Detroit Center won the Award of Excellence for its design in 1996. One Detroit Center replicas have become a souvenir item along with other Detroit skyscrapers.[7]

The building is occupied by Comerica Bank. In efforts to expand its U.S. presence, the bank has engaged in a succession of takeovers in Texas, Florida, Arizona, and California. In 2007, Comerica moved its headquarters to Dallas, Texas but maintains its major operations in Detroit. The bank's lease on Comerica Tower at Detroit Center runs through 2012.[10] Comerica is a major sponsor of Comerica Park, the home of the Detroit Tigers baseball team. The building is also occupied by Clark Hill law firm.