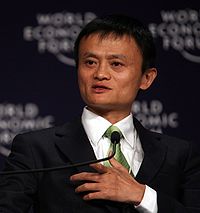 Ma was born in the city of Hangzhou, Zhejiang Province, China. Ma attended Hangzhou Teachers College and graduated in 1988 with a bachelor's degree in English. Ma initially failed the entrance exam twice. While at the school, Ma was elected student chairman.[2] He later became a lecturer in English and International Trade at the Hangzhou Dianzi University. Ma first started building websites for Chinese companies with the help of friends in the US. Ma has commented that "The day we got connected to the Web, I invited friends and TV people over to my house," and on a very slow dial-up connection, "we waited three and a half hours and got half a page.... We drank, watched TV and played cards, waiting. But I was so proud. I proved (to my house guests that) the Internet existed"[original research?]

In 1995, Ma founded China Pages, widely believed to be China’s first Internet-based company. From 1998 to 1999, Ma headed an information technology company established by the China International Electronic Commerce Center, a department of Ministry of Foreign Trade and Economic Cooperation. He founded Alibaba.com in 1999, a China-based business-to-business marketplace site which serves more than 65 million members from more than 240 countries and territories. Ma now serves as chairman and CEO of Alibaba Group, which is a holding company with six major subsidiaries – Alibaba.com, Taobao Marketplace, Taobao Mall, eTao, Alibaba Cloud Computing and China Yahoo!.

In 2001, Ma was selected by the World Economic Forum as a “Young Global Leader”. In 2004, he was chosen by China Central Television and its viewers as one of the “Top 10 Business Leaders of the Year”.

In May 2009, Ma was honored by Time magazine with inclusion into the Time 100 list of the world’s 100 most influential people. In reporting Mr. Ma’s accomplishments, Adi Ignatius, former Time senior editor and editor-in-chief of the Harvard Business Review, said, “Meeting Jack Ma, you might be forgiven for thinking he's still an English teacher. The Chinese Internet entrepreneur is soft-spoken and elflike — and he speaks really good English. But as founder and CEO of Alibaba.com, Ma, 44, runs one of the world's biggest B2B online marketplaces, an eBay for companies doing international trade. Alibaba and Ma's consumer-auction website, Taobao.com, did so well that in 2006, eBay shut down its own site in China.”[5] He was also chosen as one of "China's Most Powerful People" by BusinessWeek,[6] and one of the “Top 10 Most Respected Entrepreneurs in China” by Forbes China in 2009. Ma received the “2009 CCTV Economic Person of the Year: Business Leaders of the Decade Award”.

In 2010, Ma was selected by Forbes Asia as one of “Asia’s Heroes of Philanthropy” for his contribution to disaster relief and poverty.[7]

In 2011 it was announced that one of his companies had gained control of Alipay, formerly a subsidiary of Alibaba Group, so as to “comply with Chinese law governing payment companies in order to secure a license to continue operating Alipay.[8] Numerous analysts reported that Ma sold Alipay to himself below market value without notifying the board of Alibaba or the other major owners Yahoo and Softbank.

On November 6, 2007, at a press conference at the Ritz-Carlton Hotel in Hong Kong, called to discuss the highly successful Hong Kong Stock Exchange IPO, when asked whether Alibaba.com was an ethical trading company, Ma responded by announcing to the assembled journalists - and reiterating when queried - that he and his family have "sworn off Shark Fin Soup now and forever" (echoing elite basketballer Yao Ming's famous declaration, which angered Guangzhou's fin traders), which he said was a result of finding out what the problems are. In January 2009, Alibaba Group revised its listing policy and banned the sale of shark fin products on all of its e-commerce platforms.

At the Alibaba.com Annual Shareholders Meeting in May 2009, Ma, who is chairman and non-executive director of the publicly traded arm of the group, encouraged those in attendance, including shareholders, customers and students from two Hong Kong universities, to take matters into their own hands and take action in the form of starting businesses to cope with the economic downturn rather than waiting for government or business to help them. He reminded everyone that the great fortunes of the world were made by people who saw opportunities that others didn't, and he noted that the aftermath of the recent global recession would be no different in terms of exposing new ways of doing business.

At the annual general meeting of shareholders for Alibaba.com in May 2010, Ma announced Alibaba Group will begin in 2010 to earmark 0.3 percent of annual revenue to environmental protection, particularly on water and air quality improvement projects.