Come On Over Baby (All I Want Is You)

Come On Over Baby (All I Want Is You)

The song is about Aguilera eying a prospective boyfriend and declaring come on over baby ... 'cause all I want is you. It was released as the album's fourth and final single on September 26, 2000 and it was the first single on which Aguilera had been given significant creative control. It peaked at number one in the U.S., and was very successful in other countries as well. This was also the first time in which Aguilera was allowed to toy with her image in the music video for the song, kicking off a long evolution of looks the singer would end up doing over the span of her career. The brand new look, which included more revealing outfits and streaks of red and blue in her hair, was also used for her debut Spanish language album Mi Reflejo and also for her first headlining tour in Summer 2000.

Like "What a Girl Wants" (the second single from Christina Aguilera), a new remixed and re-recorded version of "Come On Over Baby (All I Want Is You)" was released as a single rather than the original album version. The album version, which had been known simply as "Come On Over (All I Want Is You)", was seen as unsuitable for single release. Since the single had been originally produced and written by Paul Rein and Johan Aberg in October 1998, the pair were given the first opportunity to change the song. Aguilera and Ron Fair (her mentor) were not impressed with their efforts, and turned to the producing team known only as Celebrity Status in May 2000.

With Celebrity Status and Ron Fair producing, "Come On Over (All I Want Is You)" (the album version) was transformed into "Come On Over Baby (All I Want Is You)" with a more pop oriented, hip hop-influenced production (as opposed to the original piano rich production). New and more sexual lyrics, a chord progression for the song's b-section, a bridge (the original song did not have a bridge), a "rap" from Aguilera, a new mid-song dance breakdown, and more powerful vocals by Aguilera were also added. (The song also features limited new elements from Guy Roche and Shelly Peiken.)

As the original album version does not have a bridge, it had previously been performed live with an interlude that sampled the disco song "Got to Be Real" by Cheryl Lynn. When the original songwriters of "Got to Be Real" were contacted for permission to sample their song, they denied clearance. Instead, Aguilera's team added a part to the song referencing "What a Girl Wants":

Aguilera helped write the song's controversial and slightly sexual rap section: (not in the album version)

This rap (and also a section in the second verse in which Aguilera discusses sexuality and a man's hands on her body) caused Radio Disney to ban the song initially, as it had done to "Genie in a Bottle" (the album's first single). The original album version of the song, "Come On Over (All I Want Is You)", was allowed to be played, and an edited version of "Come On Over Baby" (which removed the second verse and the rap) was also given some airplay. Reportedly, the edited single version received more airplay on the station than the album version of the song.

Directed by Paul Hunter, the music video begins with Aguilera talking on the phone with her boyfriend, telling him to come over her house. After she hangs up the phone, the scene breaks out into Aguilera wearing a white midriff and white pants, with red streaks in her hair. In the next scene, Aguilera has loose braided pigtails, a blue midriff, and blue and white checkered pants. She is in her bedroom, when suddenly her and her backup dancers begin dancing in front of a white background. The male dancers come out, and begin dancing with the female dancers. After that, Aguilera and her then-real life boyfriend Jorge Santos dance together with her backup dancers in the scene where everyone is wearing yellow and green outfits, first in a yellow-green background followed by a yellow-orange background. The next scene is where her dancers dance on chairs in white open-faced cubes, intercut with Aguilera singing in a blue-walled background and a white drapery background. Aguilera and her backup dancers then dance in front of a white background. It cuts into a scene where Aguilera walks down a flight of steps in a red room, with her backup dancers on each step. They begin dancing again, and Aguilera's backup dancers hold up pieces of puzzle paper that shows Aguilera's face.

The music video for "Ven Conmigo" was a bit different from "Come on Over (All I Want Is You), although some scenes were the same. In "Ven Conmigo", Aguilera wears darker eye makeup. Her lipstick is also light pink. In a few scenes she is seen sitting on a red bench in a white background. Both videos were directed by Paul Hunter.

When the music video for "Come on Over Baby (All I Want Is You)" aired on the Disney channel, some scenes were edited out and some of the sexual lyrics were censored/muted.

"Come On Over Baby (All I Want Is You)" became Aguilera's third number-one hit on the U.S. Billboard Hot 100, and the RIAA eventually certified the single gold. It spent twenty-one weeks on the Hot 100, and ranked thirty-eight on the Hot 100's 2000 year-end charts. The Spanish-language version of the single, "Ven Conmigo (Solamente Tú)", sticking to the original arrangement, was also a huge latin music success, becoming Aguilera's first number-one single on Billboard's Hot Latin Tracks chart.

After receiving a strong push from the record label and Aguilera herself, the single became a big hit for Aguilera, with many considering it a 'comeback' due to the slight underperformance of her previous single I Turn To You. Not only did the single hit #1 on the Billboard Hot 100 and had stronger airplay than the previous single, but the video also became Aguilera's most popular video to date, becoming a huge #1 hit on TRL and receiving strong airplay on MTV, VH1, and even Disney and Nickeoldeon.

"Come On Over Baby (All I Want Is You)" reached the top ten in the UK, Japan and Australia and the top twenty in Canada, but was less successful in Continental Europe, reaching the top forty in most markets. The single became yet another international success for Aguilera ,reaching #2 in New Zealand, where it stayed on the charts for 13 weeks. "Come on Over Baby (All I Want is You)" was eventually certified Gold in the U.S. for selling over 500,000 units in Physical CD sales. The single was also certified Platinum in Australia.[3] "Come on Over" stayed at #1 on Billboard for four weeks, and stayed on the Australian charts for 20 weeks. The single has sold over 3.500.000 copies worldwide. 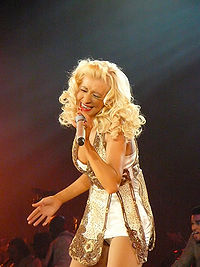 Aguilera performing "Come On Over Baby (All I Want Is You)" in the Back to Basics Tour in a jazz version.

Christina Aguilera performed "Come on Over Baby (All I Want is You)" at the 2000 MTV Video Music Awards. She wore a striking red tight outfit, with black streaks in her hair previous to how she wore them in her music video, red high heels, and a tight ruby red midriff. At the end of Aguilera's performance, Fred Durst walked onstage and performed part of his band's song "Livin' It Up" with Aguilera. During the ceremony, Aguilera wore a revealing black outfit with black heels. After eliciting charged reactions from his fans, Durst stated: "I already told you guys before, I did it all for the nookie, man." The feud died weeks later. Aguilera denied Durst's statement, saying Durst "got no nookie". Aguilera and pop peer Britney Spears disproved rumors of a rivalry when they came onstage, holding hands, and introduced Whitney Houston. Christina also performed "Come on Over Baby (All I Want is You)" on her headlining 2007 Back to Basics Tour.

The single was released to radio stations in the U.S. on September 26, 2000. The track was available in several formats, including a CD Single and maxi single. In the U.K. it was also released along with a cassette single, with the B Side of the track being the Radio Version and "Ven Conmigo". On the 12" U.K. Vinyl single, it featured two remixes by Blacksmtih Club Mix two Sunship remixes. On the Australian single, the CD featured "Come On Over Baby (All I Want Is You) [Radio version]", "Ven Conmigo (Solamente Tú)", and "I Turn To You" [Cutfeather & Joe Remix].

Major tracks released for "Come on Over Baby (All I Want Is You)".