Das Racist is an alternative hip hop group based in Brooklyn, New York City, composed of MCs Himanshu Suri (aka Heems), and Victor Vazquez (aka Kool A.D.) and hype man Ashok Kondabolu (aka Dap).[5] Known for their use of humor, academic references, foreign allusions, and unconventional style, Das Racist has been both dismissed as joke rap and hailed as an urgent new voice in rap.[6]

After rising to Internet fame with their 2008 song "Combination Pizza Hut and Taco Bell", Das Racist established themselves as credible rappers with the release of their 2010 mixtapes Shut Up, Dude and Sit Down, Man.[7][8][9] Spin magazine picked Das Racist as one of 50 acts to watch at the 2010 SXSW festival,[10] and in April 2010, MTV Iggy selected Das Racist as one of the "25 Best New Bands in the World."[11] Rolling Stone declared the song "hahahaha jk?" from Sit Down, Man one of the fifty best singles of 2010.[12] For its November 2011 "funny" issue, Spin magazine featured Das Racist on the cover, with an article written by Dap's brother, comedian Hari Kondabolu.[13]

Suri and Vazquez met in 2003 at Wesleyan University in Middletown, Connecticut[14][15] where Vazquez was Suri's resident advisor[16] in a "students of color for social justice"-themed dormitory.[17] However, they only formed Das Racist after both had moved to New York after college.[18] Kondabolu, who had met Suri when they were both students at New York's Stuyvesant High School,[19] soon joined as their hype man.[20] Suri and Kondabolu are both from Queens, New York and of Indian descent, and Vazquez is of Afro-Cuban and Italian descent and from the San Francisco Bay Area.[21] Vazquez is also a member of power-pop band Boy Crisis.[22]

Himanshu Suri stated in an interview:

Das Racist first began attracting attention with their song "Combination Pizza Hut and Taco Bell".[23][1] In November 2008, The Guardian called Das Racist a "funny and funky duo," placing them on a list of eight bands worth checking out.[24] In March 2009, Baltimore-based electronic musician Dan Deacon referred to "Combination Pizza Hut and Taco Bell" as "a track that will last the ages" in XLR8R magazine.[25] Death & Taxes magazine described the song as "an existential meditation on consumer identity in corporate America" and "both feverishly juvenile and somehow profound."[26][dead link] After playing at the 2009 CMJ Music Marathon, the New York Times described Das Racist's set as "characteristically shambolic, and characteristically entertaining, holding together a half-hour set of half-performed songs with hyperliterate reference points and self-aware charm."[27]

Main articles: Shut Up, Dude and Sit Down, Man 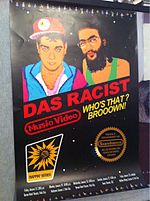 Promotional poster from the Sundance Film Festival, for the "Who's That? Brooown!" video

Das Racist's first album, the Shut Up, Dude mixtape, was released as a free download in March, 2010.[28] The mixtape received positive reviews, earning a score of 7.8 from Pitchfork Media,[29] and being described as "a fascinating album that attempts to write an impossibly new blueprint for rap: funny without trying to impress; proficient without having anything to prove; relevant without taking any particular scene seriously; imbued with a soulful sense of place—urban, disaffected, ethnic—but more interested in how that serves as fodder for jokes than in any big grab for meaning."[30]

For the song "Who's That? Brooown!" (a reference to A Tribe Called Quest's song "Scenario") Das Racist released a playable 8-bit video game of Suri and Vazquez on a quest through the New York City boroughs of Queens, Manhattan, and Brooklyn to find Kondabolu, referencing 1980s ephemera such as Double Dragon, Back to the Future, Narc, and Frogger.[31] Pitchfork named the video one of the forty best of 2010, and it was selected to screen at the 2011 Sundance Film Festival.[32][33]

Six months later, Das Racist released their second mixtape Sit Down, Man on September 14, 2010, also as a free download. Sit Down, Man received even better reviews, earning a score of 8 from Spin magazine,[34] as well as an 8.7 and "Best New Music" from Pitchfork Media,[35] and was downloaded over 40,000 times in the first week.[36] Guests on Sit Down, Man include El-P, Despot, Vijay Iyer, and Chairlift with production from Diplo, Dame Grease, Devo Springsteen, Sabzi (of Blue Scholars and Common Market) and Boi-1da.[3]

Their first commercially released album, titled Relax, was released on September 13, 2011, on Suri's own Greedhead Music label.[37] The album includes production from Diplo, El-P, Rostam Batmanglij (of Vampire Weekend), and Anand Wilder (of Yeasayer), as well as guest appearances from El-P, Danny Brown, and Despot.[38] Das Racist consider Relax to be a more accessible album, and they refer to it as a "pop record."[39] Despite receiving a negative review from Pitchfork,[40] who had lauded their previous efforts, the album has received a generally favorable response, earning an 8 out of 10 from Spin magazine,[41] and reaching the number one spots on both the iTunes Hip Hop/Rap chart and the US Billboard Top Heatseekers albums chart.[42]

Kool A.D. and Heems have both recorded solo tracks. Heems has released his single "Womyn" in July 2011.[43] The same month, Kool A.D. also released two songs which were both produced by Chicago hip-hop artist and producer kechPhrase.[44] Heems, Kool A.D., and Dapwell are all preparing to release solo mixtapes on January 1, 2012.[45]

Work in other media

With a growing repertoire of work in media beyond music, Das Racist have been referred to as a "multimedia art project".[46] At the end of 2010, Pitchfork honored "everything Das Racist did this year", calling attention to a column Suri wrote for Stereogum about the sitcom Outsourced, their interview with The New York Times' Deborah Solomon, and their appearance on "Our Show With Elliot Aronow" in which they stated that Lady Gaga was "clearly illuminati." [47]

In the summer of 2009, Vazquez responded to The New Yorker cartoonist Farley Katz's poking fun at Das Racist for "Combination Pizza Hut and Taco Bell"[48] by challenging Katz to a "cartoon-off".[49] Katz accepted, and the competition consisted of the two each submitting three cartoons on pre-specified themes.[50] Rob Harvilla of The Village Voice, surveying the results, declared Vazquez the winner, saying he "destroyed" Katz.[51]

After Sasha Frere-Jones wrote a piece in The New Yorker on the demise of hip hop in late 2009, the blog Flavorpill turned to Das Racist to provide a response; Vazquez and Suri took Frere-Jones to task for presumptuously claiming authority on the matter, questioning Frere-Jones's assumptions and conclusions.[52]

In December 2009, Das Racist hosted and curated "Minority Fest". The event, featuring Victor Varnado, Jay Smooth, and Hari Kondabolu among others, consisted of stand-up comedy by comedians of color, musical performances, and a panel discussion concerning issues faced by people of color in the arts.[16][53] 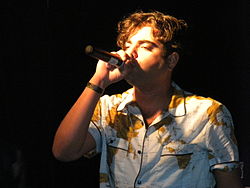 Das Racist's unique style has a strong polarizing tendency;[1] their set at the 2009 Pop Montreal festival was described as "the most divisive show seen at the festival."[55] They describe their approach to music as "'deconstructionalist': sawing the legs out from under hip-hop as they celebrate it."[56] The New York Times wrote "Das Racist’s lack of piety has become an aesthetic of its own, with songs that are as much commentary on hip-hop as rigorous practice of it."[15] The Root said Das Racist could speak for both "the ‘hood or the nearest gated community."[57] Playboy called the duo "equal parts hip-hop and Cheech & Chong."[58] In an interview with Sepia Mutiny, Suri described Das Racist's music:

we’re not making music that’s instantly appealing. We dabble with nonsequiturs, dadaism, repetition, repetition. We make dance music while talking about not-dancey things. We say things that on the surface can seem pretty dumb but it’s a mask on some Paul Laurence Dunbar shit for actual discontent with a lot of shit in the world. Further, not a lot of people want to hear rappers talk about Dinesh D'Souza being a punk, Eddie Said, Gayatri Spivak being dope or even know who they are. A lot of people hear Pizza Hut Taco Bell and then have preconceived notions about our entire body of work that fall pretty flat.[59]