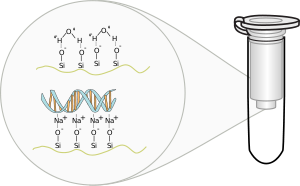 Column-based nucleic acid purification is a solid phase extraction method to quickly purify nucleic acids.
This method relies on the fact that the nucleic acid may bind (adsorption) to the solid phase (silica or other) depending on the pH and the salt content of the buffer, which may be a Tris-EDTA (TE) buffer or Phosphate buffer (used in DNA microarray experiments due to the reactive amines).
Therefore, three stages are:

Even prior to the major techniques employed today it was known that in the presence of chaotropic agents, such as sodium iodide or sodium perchlorate, DNA binds to silica, glass particles or to unicellular algae called diatoms which shield their cell walls with silica. This property was used to purify nucleic acid using glass powder or silica beads under alkaline conditions. [1] This was later improved used guanidinium thiocyanate or guanidinium hydrochloride as the chaotropic agent. [2] The use of beads was later changed to minicolumns.