Columbus Association for the Performing Arts

Columbus Association for the Performing Arts 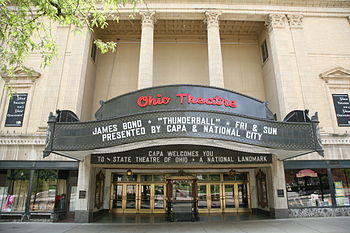 The Columbus Association for the Performing Arts (CAPA) is non-profit arts and theater management organization based in Columbus, Ohio.

CAPA was formed in 1969 by Robert Karlsberger, Lawrence L. Fisher, Scott Whitlock and other community leaders to raise money to save the Ohio Theatre, a 1928 movie palace, from demolition and revive it for use as a performing arts center.[1]

CAPA's initial success in restoring and operating the Ohio has led over the years to a great expansion of its activities. It took over ownership and operations of the Palace Theatre in the early 1990s. In 1998 it purchased and completely rebuilt and restored the historic 1890s Southern Theatre. Later CAPA took over management of Columbus's Capitol Theater complex for the State of Ohio.

Outside of Columbus, CAPA managed the historic Chicago Theatre from 1998 to 2003,[2] and took over operations of the Shubert Theatre in New Haven, Connecticut in 2001.[3]

CAPA was responsible for overseeing the 2009 $13.5 million renovation of the Lincoln Theatre in Columbus's historic King-Lincoln neighborhood. CAPA will also operate that theater, combining with ten local arts organizations to provide a varied slate of events for the new community arts center.[4]

The most recent addition to the list of theaters operated by CAPA is the Valentine Theatre in Toledo, Ohio. On June 22, 2009 the Toledo Cultural Arts Center announced that they had initiated a five year agreement with CAPA to oversee operations of the 114-year old landmark theater. Recently the recipient of a multi-million dollar renovation, the theater is home to forty of Toledo's performing arts groups, including the Toledo Symphony Orchestra.[5]

CAPA is a non-profit organization overseen by an independent board of directors. Its main offices are located in the Ohio Theatre building at 55 E. State St and the President & CEO is William B. Conner, Jr.[7]