The Tivoli Theatre, a renovated landmark on 14th Street NW, is a symbol of Columbia Heights.

Columbia Heights is a neighborhood in central Washington, D.C. 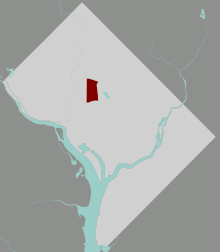 Map of Washington, D.C., with Columbia Heights highlighted in maroon.

Located in the Northwest quadrant of Washington, D.C., Columbia Heights borders the neighborhoods of Shaw, Adams Morgan, Mount Pleasant, Park View, Pleasant Plains, and Petworth. On the eastern side is Howard University. The streets defining the neighborhood's boundaries are 16th Street to the west; Spring Road to the north; Park Place to the east; and Florida Avenue to the south. It is served by a subway station stop on the Washington Metro Green and Yellow Lines.

Once farmland on the estate of the Holmead family (called "Pleasant Plains"), Columbia Heights was part of Washington County, District of Columbia (within the District but outside the borders of the city of Washington; the southern edge of Columbia Heights is Florida Avenue, which was originally called "Boundary Street" because it formed the northern boundary of the Federal City). In 1815 an engraver from England, William J. Stone, purchased a 121-acre tract of the Holmead estate — east of Seventh Street Road (present-day Georgia Avenue), and north of Boundary Street — and established his own estate known as the Stone Farm. Nearby, construction of the first building for Columbian College, now The George Washington University , was completed in 1822 on the campus which was bounded by Columbia Road, 14th Street, Boundary Street (Florida Avenue) and 13th Street.. The area began developing as a suburb of Washington soon after the Civil War when horse-drawn streetcars delivered residents of the neighborhood to downtown.

The northern portion of modern-day Columbia Heights (i.e., north of where Harvard Street currently lies) was, until the 1880s, a part of the village of Mount Pleasant. The southern portion still retained the name of the original Pleasant Plains estate.

In 1871, Congress passed the D.C. Organic Act, which eliminated Washington County by extending the boundaries of Washington City to be contiguous with those of the District of Columbia. Shortly afterward, in 1881–82, Senator John Sherman, author of the Sherman Antitrust Act, purchased the land north of Boundary Street between 16th Street and 10th Street, including the Stone farm, developing it as a subdivision of the city and calling it Columbia Heights in honor of the college at its heart. (The neighborhood's eastern, major traffic artery, Sherman Avenue, is named after its early developer.) Much of Sherman's purchase was land belonging to Columbian College. The college had decided to move into the center of Washington's downtown business district and in 1904, changed its name to The George Washington University in an agreement with the George Washington Memorial Association. Columbian, now George Washington, relocated its major operations to Foggy Bottom by 1912. The federal government also purchased some of the college's land and built Meridian Hill Park in the early 20th century. The park, also known as "Malcolm X Park", contains many statues including those of Joan of Arc, Dante and James Buchanan.

Upscale development in Columbia Heights circa 1900, was designed to attract upper level managers of the Federal government, U.S. Supreme Court justices, and high-ranking military officers. An imposing mansion known as “Belmont” marked the entrance to the neighborhood between Florida and Clifton Streets. The mansion was emblematic of the confidence that the affluent placed in the concept that Columbia Heights represented the ideal suburb. In the early 1900s, Columbia Heights was the preferred area for some of Washington’s wealthiest and most influential people. Residents included authors Jean Toomer, Ambrose Bierce, Sinclair Lewis, Chief Justice Melville Fuller, and Justice John Marshall Harlan.

In 1904, the Columbia Heights Citizen’s Association published an illustrated brochure entitled "A Statement of Some of the Advantages of Beautiful Columbia Heights." (PDF [1]) The publication describes Columbia Heights as a “residential section populated by public and spirited citizens.” Residents at that time were “ever alive to the mental, moral, and spiritual advancements of their homes surroundings.” The neighborhood organization sponsored competitions for landscaping house lots and offered prizes to the best kept lawn and garden, at the same time fought the erection of street poles and overhead telegraph and telephone lines. By 1914, four street car lines served the section providing transportation to downtown Washington in twenty minutes.

The popularity of the neighborhood resulted in the construction of several large apartment buildings during the beginning of the twentieth century that changed the suburban character of the area into a more urban and densely populated district. As of mid-century, however, Columbia Heights retained much of its upscale residential appeal, supporting establishments such as the ornate Tivoli Theatre movie house (completed in 1924). The neighborhood was adjacent to Washington's thriving middle class black community and came to be home to some of its most notable citizens by the 1930s. Duke Ellington, who had grown up in Shaw, purchased his first house at 2728 Sherman Avenue in Columbia Heights. 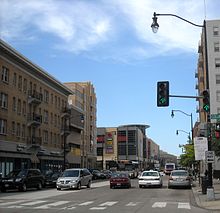 In 1949, during the era of racial segregation in the public schools, Central High School, an under-enrolled white high school that bordered the southern edge of Columbia Heights, saw the existing Cardozo High School, a "colored" high school moved to the site to accommodate the growing African American population. Significant demographic changes began in the late 1940s when African American residents began to buy apartment buildings previously owned by whites, and in the 1950s blacks bought individual homes in ever increasing numbers. The neighborhood remained a middle-class African American enclave in Washington, along with the nearby Shaw neighborhood and Howard University through the mid-1960s.

The neighborhood was featured in various clips, and as the home of protagonists Helen and Bobby Benson, in the 1951 film The Day the Earth Stood Still.

In 1968, following the assassination of Martin Luther King, Jr., riots ravaged the 14th St. Corridor in Columbia Heights along with many other Washington neighborhoods. Many homes and shops remained vacant for decades.

In 1999, however, the city announced a revitalization initiative for the neighborhood focused around the Columbia Heights Metro station that opened that year. The opening of the Metro station served as a catalyst for the return of economic development and residents. Within five years, it had gentrified considerably, with a number of businesses (including a Giant Food supermarket and Tivoli Square, a commercial and entertainment complex) and middle-class residents settling in the neighborhood. However, unlike some gentrified neighborhoods in the city, it had not become homogeneous: as of 2006, Columbia Heights is arguably Washington's most ethnically and economically diverse neighborhood, composed of high-priced condominiums and townhouses as well as public and middle-income housing. 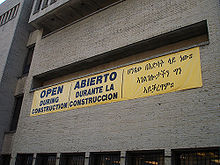 A sign in Columbia Heights in English, Spanish, and Amharic, reflecting the diversity of the neighborhood

The 2010 census figures estimated Columbia Heights with a 43.5 percent African American population; 28.1 percent Hispanic population; 22.9 percent White population; 3.2 percent Asian population; and a 2 percent Other population. It's likely that the gentrification which occurred heavily in the 00's heavily contributed to this shift in demographics.

In January 2005, the neighborhood became the first permanent home of the GALA Hispanic Theatre which moved into the newly refurbished Tivoli Theatre, a former movie theater built in 1924 that had been vacant since 1976. GALA is a theater company dedicated to performing Spanish-language plays.

The neighborhood is also home to the Greater Washington Urban League, the local affiliate of the National Urban League, in addition to other non-profit community and service-based organizations including: The Latin American Youth Center, CentroNia, Central American Resource Center (CARECEN) and the Shaw/Columbia Heights Family and Community Support Collaborative, all located along the 14th St. and Columbia Rd. corridor.

Residents are zoned to District of Columbia Public Schools.

Public schools in Columbia Heights include: