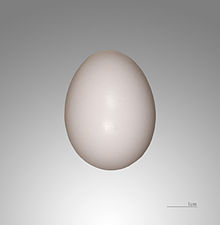 The Stock Dove or Stock Pigeon (Columba oenas) is a species of bird in the Columba genus in the Columbidae family. It is a member of the family Columbidae, doves and pigeons.

Stock pigeon is a member of the bird family Columbidae, doves and pigeons.[1] The genus Columba is the largest within the pigeon family, and has the widest distribution. Its members are typically pale grey or brown, often with white head or neck markings or iridescent green or purple patches on the neck and breast. The neck feathers may be stiffened and aligned to form grooves, absent in this species. Stock pigeon is lesser gray plumage pigeon in Europe. It is also, the rarest of the wild european pigeons.

The three western European Columba pigeons, though superficially alike, have very distinctive characteristics. The Wood Pigeon may be readily distinguished by the white on its neck (in adults) and wings. The Rock Pigeon and Stock Dove are more alike in size and plumage, but wild specimens of the former have a white rump and two well-marked dark bars on the wing, while the rump of the Stock Dove is grey and its wing bars incomplete. The feral pigeon (the same species as Rock Pigeon) is highly variable, and indistinctly marked grey specimens with the white rump missing can sometimes resemble the Stock Dove quite closely.

The Stock Dove is sociable as well as gregarious, often consorting with Wood Pigeons, though doubtless it is the presence of food which brings them together.

The short, deep, "grunting" Ooo-uu-ooh call is quite distinct from the modulated cooing notes of the Wood Pigeon; it is loud enough to be described, somewhat fancifully, as "roaring".

Stock pigeon is a forest cave-nesting in sharp decline,[2] by habitat loss combined with hunting pressure. [3] In part of its European and western Asiatic range the Stock Dove is a migrant. This is in sharp decline in France (- 57% in 1976), although not considered threatened in Europe, where it is nevertheless classified in Schedule 2 to the Birds Directive and Annex III the Berne Convention[4] the number of wintering birds in France would be 100 000 to 200 000 stock pigeons [5].

The nest is usually in a hole in an old tree. Before start logging, stock dove was the most frequent pigeon, nesting mostly in oak or pine wood, but as it usually nesting cavities in the trees only found in old forests, transformed into timber estates, there are not no holes to nest, so it has been scarce. In addition the stock dove needs a second hole for another incubation. They have been found even in rabbit burrow, ruins where cracks will facilitate breeding and preserved boundaries of old poplars with numerous cavities in which to build the nest, also a crack in a rock face, in ivy, or in the thick growth round the boles of common lime (linden) trees. It will also use nest boxes. Typical inhabitant of extensive agricultural land, the hole to nest must should have the depth of an arm, must be the entrance hole large enough to permit the passage of the fist. The stock dove needs a hole for every incubation. Though nesting material is seldom used, chickens leaves the hole very greasy. Stock pigeons prefer nest close together. Stock pigeons out of the incubation time, sleep at night in hole. The haunts of the Stock Dove are in more or less open country, for though it often nests in trees it prefers parklands to thick woods. It is also common on coasts where the cliffs provide holes. Its flight is quick, performed by regular beats, with an occasional sharp flick of the wings, characteristic of pigeons in general.

It perches well, and in nuptial display walks along a horizontal branch with swelled neck, lowered wings, and fanned tail. During the circling spring flight the wings are smartly cracked like a whip.

Most of its food is vegetable; young shoots and seedlings are favoured, and it will take grain as well as insects and snails. Feed mostly on acorns and pine seeds with a large proportion of shoots, leaves, insects, small snails and other mollusks. It feeds on seeds, acorns, berries, bay berries, hawthorn berries, figs, cereal grains, beans, peas, and small invertebrates that obtained while walking on the floor. In his autumn migration in October, this pigeons stopping at places with an abundance of acorns, supplementing the diet with shoots and leaves.

The common name Stock Dove has caused some confusion about the origins of this bird. The modern usage of the word "stock" might imply that the bird has been tamed and kept as stock for food and merchandise, leading to the belief that this bird is a hybrid breed with its origins in human aviaries; however this is not the case. The word "Stock" in the common name of this species refers not to the stock of trade, but comes from the Old English "stocc" meaning "stump, post, stake, tree trunk, log,"[6]. Therefore, "Stock Dove" means "a dove which lives in hollow trees"[7]. Such hollow trees near human settlements would often be taken and used as wood stock for firewood, hence the name.