The Colosseum at Caesars Palace

The Colosseum at Caesars Palace

The Colosseum at Caesars Palace is a theatre located on the Las Vegas Strip. The theatre is the main entertainment venue for Caesars Palace. Deemed the Home of the Greatest Entertainers in the World, the theatre host numerous residency shows by Cher, Celine Dion, Bette Midler, Elton John and Rod Stewart. The venue has an estimated seating capacity of 4,100 and is inspired by the architecture of ancient Rome along with aspects of contemporary architecture.[1] The cost of the theatre totaled $95 million, becoming the most expensive entertainment venue in Las Vegas, beating the "O" Theatre at the Bellagio Las Vegas.[2] 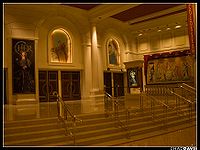 Entrance to theatre from within Caesars Palace

In 2000, Caesars Palace made plans to renovate the defunct Circus Maximus Showroom (opened 1962). During this time, the owners were approached about a new business venture with Celine Dion. Once the venture was passed, the renovation was cancelled and a new entertainment venue was set to be built to replace the old showroom. The showroom closed in September 2000 with a performance by Steve and Eydie. The theatre was built specially to house Celine Dion's "A New Day...". The construction was initiated by Park Place Management to coincide with other renovations to the hotel complex, including additional retail space, meeting areas, restaurants, spas and a 20-story all-suites hotel tower.[3] The original construction cost was estimated to be between $65 to $75 million. Additional technical aspect rose the cost to over $90 million.

The theatre was constructed by Perini Building Company, with the project beginning in December 2002 and was completed on February 4, 2003 (six weeks before its estimated completion date), opening on March 25, 2003. Dion filmed a television special for CBS to showcase the first night of her residency show (entitled "Celine in Las Vegas… Opening Night Live", hosted by Justin Timberlake), including behind the scenes look at the theatre and the show.[4]

Since it incarnation, the venue is operated by AEG Live and is currently owned by Caesars Entertainment Corporation. The success of Dion's show drew more entertainers to perform at the theatre. Elton John brought his Red Piano show to the theatre from in 2004, lasting until 2009. Additional entertainers include Kylie Minogue, Diana Ross, Romina Arena, Faith Hill, Ricky Martin and Luis Miguel. The venue has also hosted numerous comedy shows by Kathy Griffin, Jerry Seinfeld, Chelsea Handler, Dave Chappelle and Ellen DeGeneres.

The stage itself includes ten motorized stage lifts, which compose 75 percent of the stage. Unlike the Colosseum in Rome, the theatre was built in an intimate setting, with the furthest seating being 120 ft (37 m) from the stage. To reinforce its intimacy, the venue is equipped with 200 acoustical panels to control the amplified sound.[2] The theatre also includes a state of the art humidity control system. This $2 million dollar installation helped provide the perfect air atmosphere around the performers on stage for optimal acoustics, performance, and conditioning. The venue also includes state of the art technology. Some of these state of the art technology include, the lighting board and the sound board. Backstage, rigging platforms and bars are completely motorized for optimal precision and placement.