Colorado State University–Pueblo has evolved from a three-room junior college on the third floor of the Pueblo County Courthouse with 63 students and two (2) instructors to a regional, comprehensive university offering 29 baccalaureate and six master degree programs, serving more than 5,000 students from all 50 states and 23 countries. Over the past 75 years under four different names, the institution has graduated more than 35,000 students from 41 states and 32 countries. Today, more than 14,000 graduates live in Colorado.

The idea for starting a college in Pueblo was initially proposed in 1926, when a bill was put before the state Senate to begin a four-year school in the city. The bill was defeated by one vote.

In the years following the Great Depression, the idea for a college in Pueblo was revived through the efforts of a local school teacher at Centennial High School, Eric T. Kelly.

At the time, Pueblo's primary employer, steelmaker Colorado Fuel & Iron Corp., was no longer hiring, drought and dust storms were plaguing all of Southern Colorado and the city still was trying to recover from the devastating floods of 1921.

Kelly organized a committee composed of several local business leaders to discuss the possibility of getting a college started, among them Frank Hoag, Jr., publisher of The Pueblo Chieftain and Star-Journal newspapers, Dr. C.N. Caldwell and J. Arthur Phelps.

The school originally was planned to be named San Isabel Junior College, but by the time the school had received incorporation it was changed to Southern Colorado Junior College (SCJC). The name change was made in an effort to broaden the recruitment area for the college.

The first classes at SCJC were held in the fall of 1933 in three vacant rooms on the third-floor of the Pueblo County Courthouse. Sixty-three students (31 full time and 32 part time) enrolled and the staff consisted of two full-time and eight part-time instructors, a registrar and Kelly, who agreed to serve as the dean of students, of that first class of students, 17 would earn a degree with the first graduating class of 1935.

By 1935, the school's enrollment was steadily increasing, and the need to find a permanent location was imminent. With land donated by the CF&I and local money from the City Federation of Women's Club and the Works Progress Administration, construction of the college's first building—a 55,000-square-foot (5,100 m2) arts building—began in 1936. The property donated for the college was bordered by the Bessemer ditch, Marilyn Place, Orman Avenue and the alley at Orman and Arthur and became known as the Orman campus.

Kelly gave up his position as dean in 1936, and L.R.Wren took over as president and served in that position until 1939. A year later, Pueblo County residents formed the Pueblo County Junior College District, which allowed for the college to receive tax dollars.

The university has operated under five different names:

Taking advantage of the Junior College Act of the General Assembly, the Pueblo County Junior College District was formed, making the college part of the public school system supported by county-wide taxes. The name change to Pueblo Junior College brought with it a change in mission. The institution offered the first two years of general study at the college level, providing the educational foundation for students seeking to transfer to complete their higher education degrees at four-year colleges and universities, and continued to offer a range of practical courses for those not seeking a higher education degree.

The 30th anniversary year saw the State enact legislation making the institution a four-year degree granting college and a member of the state system of higher education. The first juniors were enrolled in 1963, followed in 1964 by the first seniors and the first bachelor's degrees awarded in 1965. The name change to Southern Colorado State College reflected recognition of the need for more advanced degrees and an increase in the number of students pursuing a four-year degree in the southeastern region of Colorado. In 1964, Colorado State Senator Vincent Massari led the college's push to become a four-year university. Senator Massari was instrumental in obtaining funds for a new campus in the Belmont area of Pueblo, moving from the old junior college campus on Orman Avenue.

As the demand for higher education programs increased, the number of academic degrees offered at the undergraduate and graduate levels increased. The first graduate program to be offered was the Master of Arts in Teaching with an emphasis in industrial education beginning in 1972. The institution was granted university status and renamed the University of Southern Colorado. It was designated as Colorado's only polytechnic university. In 1985, USC was integrated into the newly created Colorado State University System (CSU System) with Colorado State University, Colorado's only land-grant university, and Fort Lewis College. In 2002, Fort Lewis College chose to be a separate entity.

Prior to the 1995-96 academic school year, the University of Southern Colorado (now Colorado State University–Pueblo) adopted the "ThunderWolf" as its mascot. The ThunderWolf came to life as USC looked to modernize its image following more 60 years as the "Indians." The legend of the "ThunderWolf" is as follows:

"The thunderwolf was discovered in the Southern Colorado foothills in 1933. The species is thought to be indigenous only on the city of Pueblo's beautiful horizon from the Spanish Peaks to the south to Pike's Peak to the north. A regal and majestic animal, the thunderwolf has evolved into the wisest and strongest of all beasts. The thunderwolf is cloaked with hair as blue as Colorado's skies, and with a mantelet of hair around its neck as white as Colorado's snow-capped mountain peaks. Longer guard hairs, as red as Colorado's rocky soil, abound throughout the white mantelet. Some say they have seen lightning bolts in the thunderwolf's large blue eyes.

Because it is an intelligent and inquisitive animal, the thunderwolf expands its knowledge and understanding of the environment daily. Although the thunderwolf exhibits a cooperative team spirit when hunting with the pack, it also is an individualistic thinker which helps the pack burst through paradigms when solving problems.

One of the most distinctive characteristics of thunderwolves is their ability to form unusual partnerships with other species to protect the environment for the general good. Their excellent communication skills have led some observers to believe thunderwolves may be able to communicate to different species from other countries.

Colorado State University–Pueblo is proud to be known as the ThunderWolves, and we hope the thunderwolves are proud of us as well." 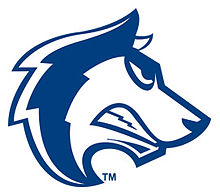 The original ThunderWolf logo was put into place prior to the 1995-96 school year. Designed to elicit fear and reverence, the original logo contained a detailed head of a ThunderWolf with a mountain range in the background. After a few years of use, the logo was eventually scrapped for a more easily reproduced logo that contained the letters "USC".

The logo remained in use until the University of Southern Colorado changed its name prior to the 2003-04 school year to Colorado State University–Pueblo. While the university's main logo and seal and seal changed to the ThunderWolves logo also required a change.

CSU–Pueblo is located in Pueblo, Colorado, a mid-size city of approximately 100,000 residents located in the Pikes Peak region of southern Colorado. The university's 275-acre (1.11 km2) main campus is located in the Belmont area in the northern edge of Pueblo.

Most campus buildings reflect the International Style of the 1960s. Altogether, there are twelve buildings on campus, eight of which are strictly academic buildings. There is also an administration building, student center, library,child care center and student recreation center which is adjacent to the university's primary athletic complex, Massari Arena.

The campus began a major renovation in 2007, as renovations were made to Massari Arena and construction began on the new student recreation center, which was completed in time for the start of the 2008-09 academic year. In 2011 a multi-million dollar renovation project was completed on the university's library, residence halls and solar array.

Board of Governors of the Colorado State University System

The current Board of Governors of the CSU System are[1]

CSU-Pueblo is a member of the Rocky Mountain Athletic Conference (RMAC), the oldest conference operating in NCAA Division II and the fourth oldest athletic conference in the United States (founded in 1909). The athletics department supports 16 intercollegiate athletics programs, including

In 2007, the Board of Governors of the Colorado State University System approved to bring back football, wrestling, and women's indoor and outdoor track & field. All three programs returned during the 2008-09 school year, and the football program, playing in the Neta and Eddie DeRose ThunderBowl, finished in the top 10 in the nation in attendance, averaging more than 8,000 fans per game during the 2008 season.

CSU–Pueblo has a peripheral role in one of the most enduring urban legends in entertainment, specifically Van Halen's legendary requirement in their technical rider that a bowl of M&Ms, with all brown pieces removed, be present in their dressing room. Notably, media reports in the 1980s often claimed that the band had done more than $85,000 of damage to CSU–Pueblo's (then University of Southern Colorado) basketball arena after discovering brown M&Ms backstage. The actual story, as told by David Lee Roth in his autobiography, was decidedly different. As background, Roth noted that the demand was added as a test of each venue's attention to detail after technical errors at smaller venues led to dangerous and even life-threatening situations. In Roth's telling of the CSU–Pueblo incident, he admitted to having done about $12,000 of backstage damage after noticing brown M&Ms, but indicated that over $80,000 of damage was done to the school's newly installed basketball floor because it could not support the band's extremely heavy staging.[11]