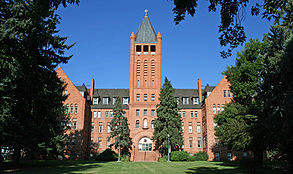 Its campus consists of 19 buildings on a 74-acre (300,000 m2) site, the highest area in Denver. The Administration Building, the centerpiece of the campus,[citation needed] opened in 1891 and is entered in the National Register of Historic Places listings in Denver, Colorado. Its prominent bell tower can be seen from miles around, serving as a landmark for many Denver residents.

Founded by Mother Pancratia Bonfils, S.L. in 1891, the Sisters of Loretto started a private elementary and secondary Catholic school for girls they called Loretto Heights Academy. Located on one of the highest points in the Denver metropolitan area, the school was very successful. For much of the last century it was the premier women's Catholic school in Denver.

In the early 1900s the school began its transition to a women's college; Loretto Heights College was established in 1918 by the Sisters of Loretto as a parochial school for women. The nursing school was the first in the state and enjoyed an excellent reputation. The college became independent in 1968 and coeducational in 1970. Then in 1988 it was absorbed by its sister school Regis University due to a financial collapse. Alumni are still very active with Regis and the Health Services program at Regis was started at Loretto and is now one of the most successful programs there.

The campus remains a college and still retains much of its early charm. It is now a part of the Teikyo Group and known as Colorado Heights University. It is focused on international studies. Since 2007, the top floor of the main building has been leased to the Augustine Institute.

The Teikyo University Group comprises six foundations, undergraduate and graduate universities, and a number of specialized schools and institutions, including the largest private medical school in Japan,[citation needed] with three teaching hospitals, a school of pharmacology, a law school, and a graduate school of engineering. The group's 50,000 students are spread out among 46 campuses located in Japan, the United States, Germany, the Netherlands, the United Kingdom and Hong Kong.

As part of the Teikyo-Harvard Program, the university has completed its human anatomy laboratory, a state-of-the-art facility with access to all forms of multimedia technology[citation needed] for faculty and researchers, including a portable wireless camera system, which allows the instructor to project live images onto a large screen, and video monitors for easy viewing by faculty and researchers. Colorado Heights University has funded a $2.5 million grant toward the start-up expenses of the program. "We are excited to be able to fund a new program initiative that serves multiple members of the UNITE consortium, said Fred Van Liew, president of the Teikyo Foundation. "Through this grant, we are able to help develop a new program in a new market, while also adding a significant presence to the Teikyo Loretto Heights University campus."

Teikyo University has academic affiliations with