In 1938 Spencer Penrose and Charles Tutt developed plans to convert The Broadmoor's unused equestrian center into an indoor ice arena, known as the Broadmoor Ice Palace.[2] After three weeks at a cost of $200,000 the Ice Palace opened and became the home of the Tigers Hockey program and the Broadmoor Skating Club.[3] Colorado College Tiger Hockey began in 1938 playing in the Pikes Peak Hockey League with various local teams sponsored by Colorado Springs area businesses.,[2] The Tiger's opened play on January 21, 1938 in a 1-8 loss to a team sponsored by Giddings Department Store.[4] Garrett Livingston took over as head coach fin 1939 from John Atwood, who served as player/coach for the first season.[4] Livingston increased recruiting, bringing players from Canada and New England and transitioned the program from the Pikes Peak Hockey League into an NCAA Division I independent program.[4] The Tigers swept Michigan 4-2 and 4-3 in the program's first-ever intercollegiate series early in the 1939-40 season. That same season Colorado College also played games against Colorado School of Mines, Montana School of Mines, and University of Southern California.[4]

The program and college was suspended during World War II from 1942 to 1944.[2] Colorado College, with the cooperation of the Broadmoor Hotel, sponsored the first National Collegiate Athletic Association Ice Hockey Championship to conclude the 1947-48 season. The tournament was held at the Ice Palace for the next 10 years, during which time CC participating seven times.[4] Cheddy Thompson became the program's third head coach in 1945 after coming to Colorado Springs on assignment by the Air Force during the war. Thompson lead CC to the program's first NCAA championship in 1950 with a 13-4 win over Boston University. Colorado College became one of the founding members of the Mid-West Collegiate Hockey League (MWCHL) in 1951 with University of Denver, Michigan, Michigan State, Michigan Tech, Minnesota, and North Dakota.[5] The league became the Western Intercollegiate Hockey League (WIHL) in 1953 and became the Western Collegiate Hockey Association (WCHA) in November 1959.[5] The Tigers also finished as runner-up in 1952 and 1955, losing to Michigan in both appearances in the championship game.[4] In addition, he was named national Coach of the Year in 1952 by the United States Hockey Coaches Association.[4] The Tigers returned to the championship game in 1957 with Tom Bedecki behind the bench. CC beat Clarkson 5-3 in the semifinal round and won the school's second hockey championship with a 13-6 win over Michigan.[6] In 1961 the Ice Palace became known as the Broadmoor World Arena.[3] The 1957 championship was the final appearance in the NCAA Tournament until 1978.[1] The Tigers finished the regular season and captured the school's first and only WCHA Tournament Championship and received a bid to the NCAA Tournament, in the first round the Tigers lost to Bowling Green State 3-5.[7] 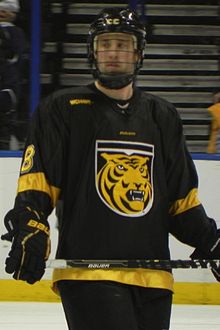 Jaden Schwartz during the 2011 NCAA Tournament

In 1993 Don Lucia became the head coach of the Tigers. In his first season, 1993–94, he led the team to win the MacNaughton Cup, given to the WCHA regular season champion. It was Colorado College's first Cup win since 1957.[8] After serving as the Tigers' home ice for 55 years the Broadmoor Wold Arena closed in March 1994 and later demolished by the Broadmoor Hotel to make room for the resort's expansion.[3][9] Colorado College was then invited by the Air Force Academy to play at their home ice, the Cadet Ice Arena until the new World Arena opened in 1998 on the southern side of Colorado Springs and continues to be the home ice for both the Colorado College Tiger hockey team and Broadmoor Skating Club.[10] The Tigers returned to the NCAA post season in 1995 for the first time since 1978. The Tigers lost in the quarterfinal round to Minnesota 2-5.[11] The following season CC made a second straight NCAA tournament appearance, receiving a number one seed in 1996 NCAA Tournament. Colorado College beat UMass Lowell 5-3 in the quarterfinals and Vermont 4-3 in the semifinal round beforing losing to 3-4 in overtime to Michigan in the championship game.[12] CC returned to the Frozen Four under Lucia for a second straight season in 1997 before losing to North Dakota 6-2.[13] Lucia lead the Tigers to two additional NCAA Tournament appearances in 1998 and 1999 before leaving Colorado College to become head coach at Minnesota.[1]

Scott Owens took over as head coach of the program in 1999 and lead the Tigers to three straight NCAA Tournaments in 2001, 2002, and 2003.[1][14] In the 2005 Tournament The Tigers returned to the Frozen Four with a 4-3 victory over Michigan in the Midwest Regional Final.[15] In the Semifinal round the Tigers fell to the eventual national champion and rival Denver 2-6.[16] Owens lead CC to the NCAA Tournament again in 2006 Tournament and in 2008 Tournament, ending in first round exits both times.[1] The Tigers returned to the NCAA Tournament in 2011. The Tigers upset the number one ranked team and defending National Champions, Boston College 8-4.[17] The Tigers' win was led by freshman Jaden Schwartz, a first round draft choice of the St. Louis Blues making his St. Louis debut in the West Regional.[18] The Tigers' season ended in the Regional final in a 1-2 loss to Michigan.[19]

Of all the rivals that the Colorado College Tiger hockey program play against (most of which are other WCHA schools) the most intense rivalry is that from the neighboring college of the Denver Pioneers men's ice hockey. Since DU's hockey program started in 1949 the two schools have always met during the hockey season. In the 1993-04 season a gold pan trophy was added as a reward for the winning team thus the rivalry has been dubbed the Battle for the Gold Pan. It is widely considered to be the most hearted rivalry in all of college hockey.

Over 170 Colorado College alumni have gone on to play professionally, including over 30 current and former NHL players:[22]